Drawing on original interviews with 26 journalists of colour who work for Britain’s largest news organisations, Omega Douglas explains why and how discriminatory patterns, as well as contradictions, occur and recur in British news production.

When Meghan Markle highlighted the racist treatment she’s been subjected to by the British press during the recent interview she gave Oprah Winfrey, one of the most interesting factors that arose in the media storm that followed was the chasm between the response by the Society of Editors, an industry body which acts to protect the interests of British media organisations, and journalists of colour who work for those organisations. Ian Murray, the Society’s executive director at the time of the interview, released a statement headlined ‘UK media not bigoted’ and criticised Meghan and Harry for making comments about the press that are ‘not acceptable’ and made without ‘any supporting evidence’. Murray’s statement was swiftly knocked back by over 200 journalists of colour who signed an open letter describing the Society’s statement as ‘laughable’ and an illustration of an ‘industry in denial’.

That the Society of Editors saw fit to publish a statement denying racism in the British media is staggering given that a quick online search reveals a raft of evidence that demonstrates otherwise, including recent studies flagged by Rasmus Kleis Nielsen, Director of the Reuters Institute for the Study of Journalism. Further digging would produce more evidence going back years. For instance, the launch of the black British newspaper, the Voice, post the 1980s riots, was a response to the underrepresentation and misrepresentation of black people in Britain. Whilst the 1999 Macpherson Inquiry into institutional racism, which led to unprecedented scrutiny of public and private institutions and their race equality policies following the racist murder of black British teenager Stephen Lawrence, was, as I point out in my research on the experiences of black and brown journalists in the UK press, a bitter-sweet period for black journalists. Because, like #BlackLivesMatter today, the inquiry put race on the agenda in the cruelest of ways, and made black journalists ‘seen’. Those who had long been calling for greater diversity in mainstream UK media used the Macpherson report as an opportunity to urge senior journalists and editors, who were busily writing about the institutional racism the report formally uncovered within the Metropolitan Police, to reflect on equality within their own institutions.

Yet decades later just 0.2% of journalists are black, compared with 3% of the UK population, Asian Britons make up 7% of the UK population, but just 2.5% of the journalist workforce, and 94% of journalists are white, compared with 87% of the population of England and Wales. These figures are more alarming given that most of the UK’s national news media organisations are based in London, where, according to the 2011 census, only 45% of the population are of white English, Scottish or Welsh heritage. Meanwhile, figures from 2014/15 on the likelihood of journalism students being employed as a journalist six months after graduation indicate that white students have a 26% chance, while black students only have an 8% chance. To add insult to injury, research by Women in Journalism found that no major British newspaper ran a front-page story by a black reporter during a randomly selected week last summer. This dearth of diversity, quite simply, amounts to structural racism.

So, the denial of racism in the British press is clearly wrong, a point agreed upon by some senior industry figures, including the editors of the Guardian, Financial Times and HuffPost who were quick to object to the Society of Editor’s statement. Ian Murray has now resigned following the backlash and the Society has issued a new statement saying that Murray’s response to Meghan and Harry’s interview ‘did not reflect what we all know: that there is a lot of work to be done in the media to improve diversity and inclusion’. So why, given some powerful people in journalism acknowledge there is a problem, is the need ‘to improve diversity and inclusion’ a ritualistic conversation that’s been ongoing for years, and only occasionally attracts attention from those in positions of power?

Findings from my research show that a messy tangle of economic and ethical logics informing approaches to media diversity and inclusion contribute to superficial levels of engagement with institutional racism. The tangle, whereby diversifying content and staff is often informed more by a need to grow audiences than an ethical requirement for journalistic content and those who produce it, to adequately reflect the society news media organisations have a duty to speak to and for in democracies, tends to obscure engagement with structural racism. Hence the ritualistic conversations, and the experiences of journalists of colour, who frequently, my research shows, encounter racism within the institutions they work for and whilst reporting in the field, not significantly changing over time.

Drawing on interviews with 26 journalists of colour who work for Britain’s largest news organisations, my findings reveal that often limited, or a complete lack of, engagement with structural racism by editors and proprietors leads to black and brown journalists feeling, and literally being, overlooked. As one interviewee said: ‘My boss was away and me and one of his deputies, who’s newer than me, were working on a story. Our editor, a white man, came by and chatted with my boss’s deputy, who’s also white. Our editor looked around the desk, clocked me, looked back at my boss’s deputy and said, ‘god, you’re on your own today’. I was [. . .] devastated. I’d worked a 13-hour day. […] that says everything about how you’re regarded as a black staff member.’

At the other end of the scale, journalists of colour are made hyper visible. Hypervisibility dovetails with economic logics vis-à-vis media diversity and inclusion. This plays out via the way institutionally white spaces ‘display’ black and brown employees (via picture by-lines or on screen) as evidence of their supposedly inclusive brand. In turn, institutions benefit from the cultural and/or economic capital that blackness and brownness brings in the way of, as one interviewee experienced, access to specific stories, without addressing institutional racial disparities that an ethical approach to inclusion demands: ‘They needed someone [. . .] black [. . .]. [The editor] asked me into his office and said, ‘there are stories we can’t get [. . .].’ I was sent to serve a specific challenge.’

The problem with a market-driven, rather than an ethical, approach to diversity is that if your value is primarily attached to serving ‘a specific challenge’, rather than deemed integral to the functioning of an organisation, you’re arguably more easily disposable. But, as another interviewee said, their attempts to centre the ethical importance of ‘the need to reflect society because that’s [. . .] a central purpose of the media’, are side-lined because ‘bringing [. ..] profit into the conversation makes executives [. . .] take notice. Even though we’re talking about including more people from different ethnic backgrounds, and [. . .] they’ve been excluded because of racism, talking profit diverts attention from anything to do with racism.’

Hypervisibility also, my research shows, arises when journalists at the receiving end of racism are tasked with addressing it and the unjust nature of this burden is amplified when their suggestions for tackling racism aren’t implemented by organisations.

Broadcast and press take different approaches to diversity, with the former currently doing better than the latter. That said, as with the Macpherson Inquiry, the brutal police killing of George Floyd in May 2020 has led to important, positive responses by some segments of the UK press, which merit further analysis to ensure they’re effective and lead to sustained, structural shifts. What’s urgently needed at an industry-wide level is serious engagement with systemic racism. Ideally, this would involve a long-term collaborative, holistic approach (meaning content and production contexts are consistently monitored and issues actively addressed) across British press and broadcasting institutions, similar to the change being sought regarding racial equity in US newsrooms via the Vision25 movement. Instead, we’re faced with the current situation where, as illustrated by Murray’s statement and the row that followed, there is no industry consensus on whether the British journalistic field has a race problem, let alone a clear, joint method for tackling it. This must change.

*This article draws on the author’s work published in Journalism.

Omega Douglas is Lecturer in Media, Communications and Cultural Studies at Goldsmiths, University of London.

Photo by Christina @ wocintechchat.com on Unsplash.

Posted In: Economy and Society | Fairness and Equality | Police 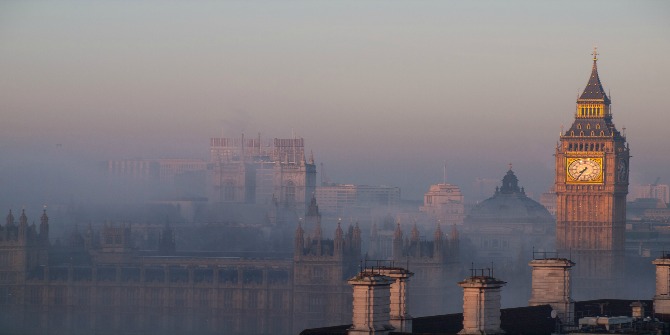