Ruth Dixon considers poll results of UK party leader satisfaction amongst their own party supporters as possible predictors of election success. The findings give little comfort to either of the two main parties, should an election be held in 2018. ‘Enthusiastic supporters’ appear less numerous than before any election over the past two decades. These polls give neither party a clear predicted victory, making it very risky for the government to hold an election at this time.

Recent press rumours that the government is considering a ‘snap’ general election in the autumn of 2018 (though categorically denied by Downing Street) prompt the question: what do the polls show? Could either main UK party enter an election campaign with confidence of victory? Of course, we should be cautious about making predictions as polling has led pundits astray in recent years. Nevertheless, consistent long-term polling results from organizations such as Ipsos MORI give some useful pointers.

Predictions based on Ipsos MORI’s voting intention numbers are currently ‘too close to call.’ Those polls show Labour and Conservative being neck-and-neck since the start of 2018, with each party receiving the endorsement of about 40% of the electorate. I have previously suggested that leader satisfaction ratings can be a useful supplement to voting intention polls. Party supporters who are also satisfied with their party leader might be ‘enthusiastic supporters’ who are more likely to campaign and to vote. Satisfaction with their own party leader among Conservative and Labour supporters correctly predicted the winner of each UK general election since 1997 (when Ipsos MORI began to report that metric) as shown in the graph below. Nevertheless, while this metric consistently predicted which of the two main parties would win the most seats, it did not predict that the Conservatives would lose their majority in 2017.

So, do party leader approval ratings among Labour and Conservative party supporters predict a clear winner, if an election was to be held in late 2018? Polling in September 2018 prior to both party conferences put Theresa May ahead of Jeremy Corbyn among their respective party supporters. But as can be seen in the graph below, neither party leader’s rating is high compared to winners of previous elections. Combining voting intention numbers with these satisfaction ratings suggests that neither May nor Corbyn can count on more than about 20% of the UK electorate as ‘enthusiastic supporters.’ The September 2018 poll was of course not taken during an election campaign when party loyalties are likely to be stronger, but it is striking that May’s rating among Conservatives is now lower than David Cameron’s was at any time while he was Prime Minister. 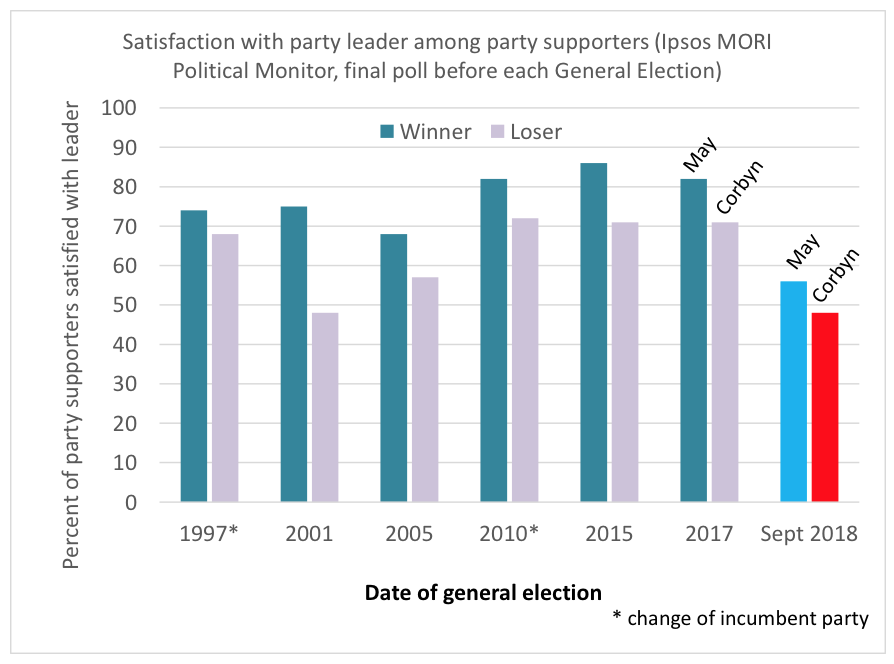 How consistent is May’s current lead over Corbyn on supporter satisfaction? Ipsos MORI numbers plotted below show that the 2017 election campaign resulted in a surge of popularity for Corbyn among Labour supporters, while Conservatives became much less satisfied with May. As the graph below shows, both leaders’ ratings have declined since the election and each has been ahead at various times over the past 18 months. Thus these figures give no assurance that May’s lead on supporter satisfaction will persist. 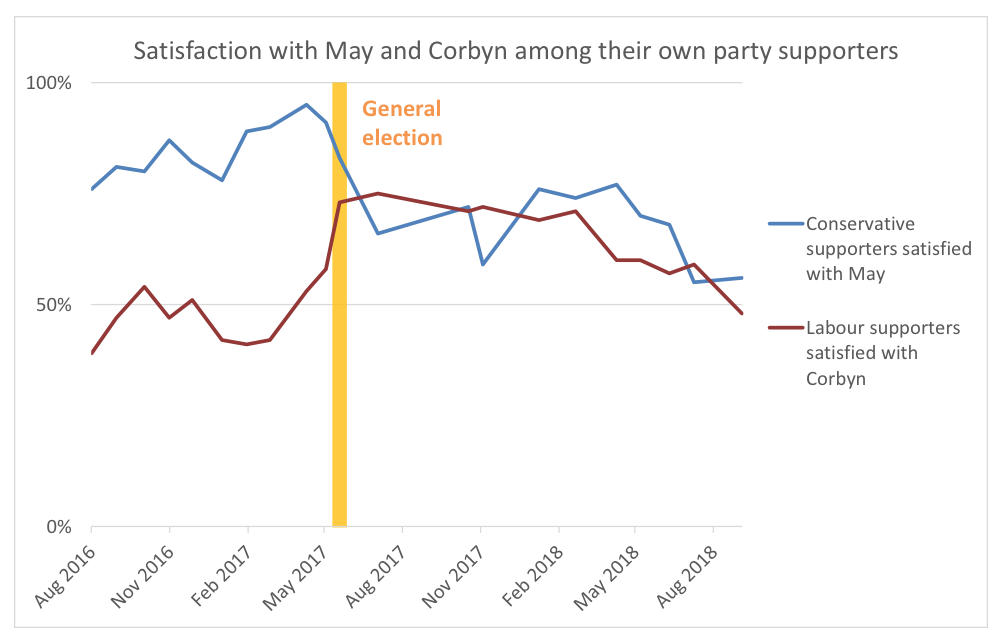 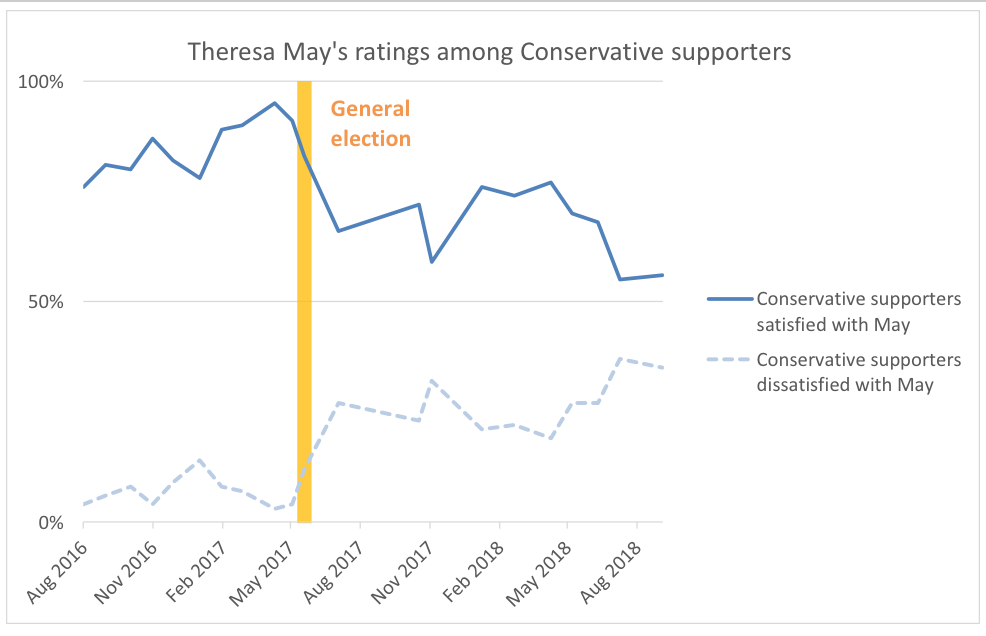 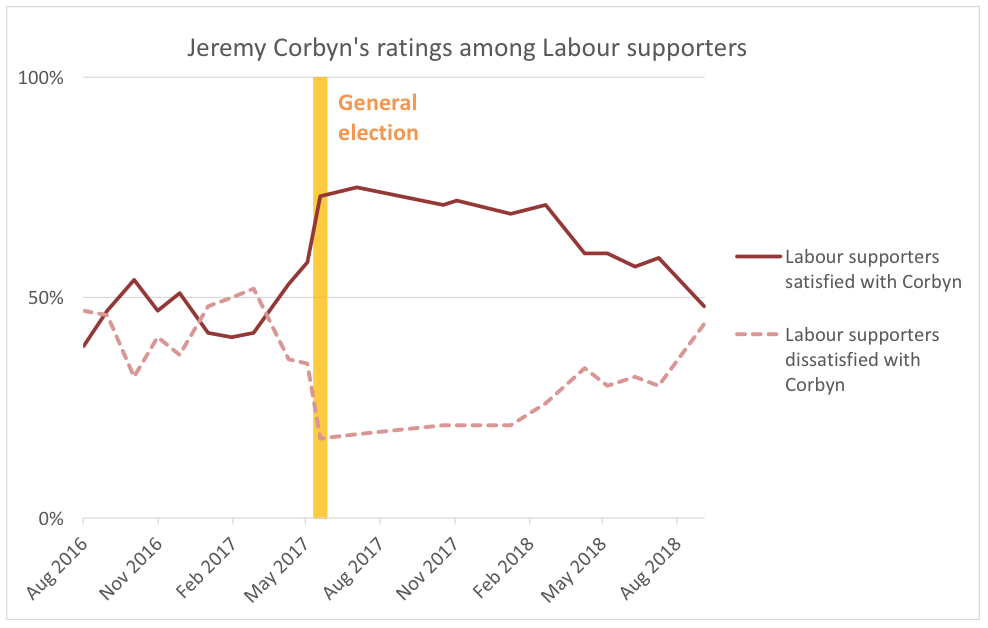 In summary, polls of party leader satisfaction give neither main party cause for optimism should a general election be announced in autumn 2018. Satisfaction with both May and Corbyn among their own party supporters has declined since the 2017 election, meaning that neither party has many ‘enthusiastic supporters’ to count on. Numbers of party supporters expressing dissatisfaction with their respective leaders have risen. Thus, leader satisfaction polls taken in mid-September 2018 (before the party conferences) give neither party a clear predicted victory. My only prediction (for what it’s worth!) is that a snap election in autumn 2018 is unlikely, given the enormous risk that it would represent to the Conservatives’ already wafer-thin governing majority.

Ruth Dixon is Research Fellow at the Blavatnik School of Government, an associate member of the Department of Politics and International Relations, University of Oxford, and a college lecturer in Biochemistry at The Queen’s College.

Local elections vote shares: the measures used to project local votes nationally are better than looking at the number of seats won or lost, but local voting does differ from general election vote intention 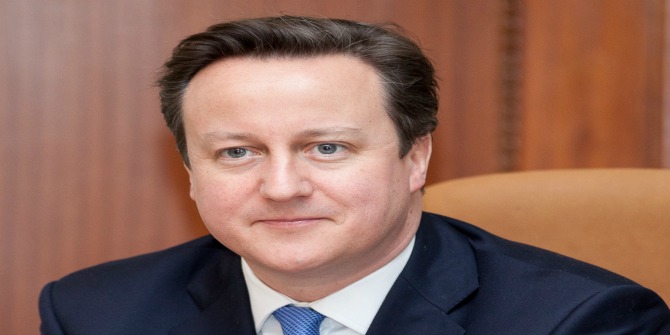