To help organisations increase their number of active members, Kate Dommett and Sam Power explain how people decide whether to join (and remain in) an organisation, as well as what may be keeping them from participating in its activities.

Membership has historically been a key part of the democratic system. Through membership, political parties, campaigning and professional bodies have made links with citizens, providing an easy way for people to get involved. And yet, as most organisations know, maintaining membership levels and encouraging members to get involved is far from an easy task. In a new report, we have unpicked the challenge of membership to explore not only what explains membership, but also what can be done to encourage people to join, become active and resist the temptation to leave.

Membership is, in essence, a very simple thing. Organisations create schemes that allow people to get involved in a given activity, normally charging them to access some service or rights that they want to receive. Whether becoming a member of the National Trust, Greenpeace or a local gym, people therefore decide to become involved in order to receive something in return, or to demonstrate their support for an idea or cause. Despite appearing simple, we argue that membership is often more complex than it looks, and is underpinned by a journey that sees motivations, triggers and processes come together.

When we think about why people join an organisation, why they become active and stay members, we argue that we need to think about how motivations, processes and triggers combine to influence individuals. First, people must possess a motivation to get involved. These can range from wanting to express a particular view, become involved with like-minded people, or do something to enhance their future career. Without motivations, people are unlikely to join. But, alone, motivation is not enough – people also need a trigger that prompts them to act on that motivation. Just as the New Year prompts many to join a gym, a political event such an election, or a crisis such as an environmental disaster, can prompt people to take the decision to join. A catalyst, whether personal, local, national or international, is therefore critical in getting people to join and then engage in an organisation.

There is also another, often overlooked factor: people also need to be able to access effective ‘processes’ to join. Whether it’s an online portal for signing up and setting up a direct debit, or an old-fashioned postal address, organisations of all kinds need good processes that allow prospective members to join with minimal fuss. Modelled in the diagram below, these factors therefore intermingle and inter-relate. 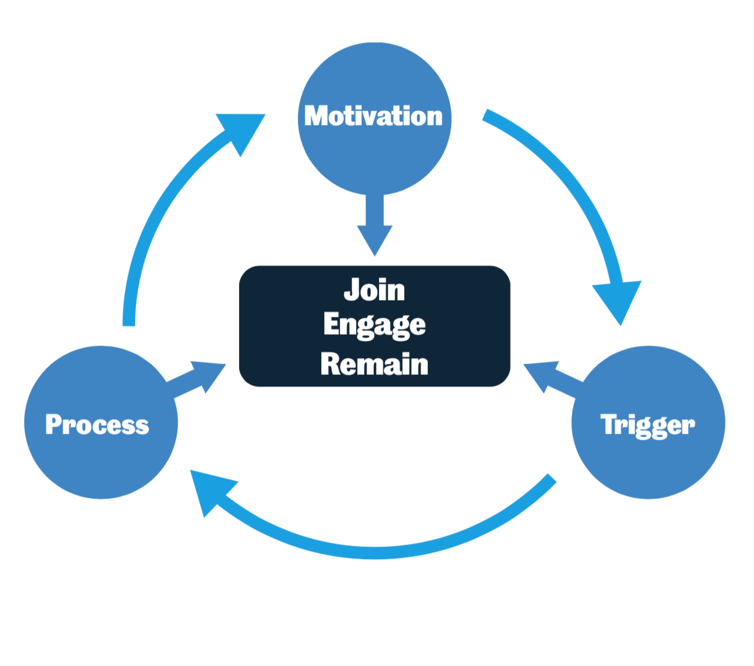 What is important about this model is that it can be used to not only explain why people join, but also to prescribe what organisations can do to boost the numbers joining, becoming active, and remaining within a group.

Based on this model, we argue that any organisation seeking to boost its membership needs to ask three simple questions:

If all three ingredients are needed to prompt people to become members, then organisations should focus on each in turn. First, they can spread motivations by letting people know why members are needed, and by sharing stories of why those already involved were motivated to join. Second, they can check that their processes work effectively, and experiment with different ways of prompting how to get involved. Secret shopper exercises can be utilised to test the effectiveness of different processes, but organisations should also trial things like putting membership joining on the front of their website, or promoting joining on social media or in face-to-face campaigns. In these ways, organisations can try to make membership easy and attractive.

Triggers are also important, and so any membership organisation should also think about up-and-coming events that they could latch onto to promote membership. Political parties should therefore promote membership when an election is called, whereas outdoor events organisations should drive membership as the summer solstice (and warm, long evenings) approach. By anticipating forthcoming triggers, organisations can piggyback on existing events and prompt people to get involved. In a different way, they could also orchestrate a trigger by staging their own event designed to drive membership, or make membership a part of other activities by mainstreaming this idea.

Want to get members more involved?

Once someone has joined it’s not always clear what makes them get involved. Indeed, lots of people sign up, but never become active members. To consider this problem, organisations should ask themselves:

Once again, organisations need to think about these three aspects and design ways of capitalising on each. First, many people don’t see the point of becoming active. By making explicit asks and feeding back the impact of engagement, organisations can help to motivate people to come engaged.

Similarly, they can think about how easy it is to become engaged. There can be lots of barriers to activism, and many people lack time to make the effort to engage. By providing clear guidelines for how to get involved and providing accessible and friendly information about how to engage, organisations can promote activities.

Personal contact is often crucial to success and there is much to be said from a personal email or phone call as opposed to an endless barrage of generalised mail. Taking time to reach out and talk to people allows organisations to work out how individuals want to be engaged, allowing them to develop effective processes for getting them involved.

Once this is done, triggers or events can then be used to pinpoint potential opportunities for activism. An event such as Britain leaving the EU could therefore be used as a trigger to activate those interested in the EU to take action, or an environmental crisis could be a prompt to reach out to people interested in climate change to ask for more active support. Linking up motivations, processes and triggers is therefore also crucial to producing active members.

Want to stop members from leaving?

Finally, we argue that this model can also help stop people leaving by asking:

As outlined above, motivation isn’t just important for joining, it is also vital for keeping people involved. When people no longer know what they’re a member for, they are unlikely to remain. Many organisations focus so much on new members, that they forget to thank existing ones for being involved and don’t feedback the impact they have had. Devoting attention to renewing people’s motivations should be an ongoing objective for any group.

More practically, different steps can be taken to make it hard to leave. Although people can simply stop their direct debit, organisations should design the process of leaving a party to give people time and space to reflect on their decision. This could include a cooling-off period or providing motivational messages to stay involved. It is key for an organisation to engage someone who is leaving, not simply to let them go.

Finally, sometimes events can just cause people to leave. If an organisation’s position changes in a way someone is unwilling to accept, then there is little to be done to stop them from leaving. While organisations can’t counter unavoidable differences of opinion or changes in an individual’s financial ability to be a member, they should nonetheless try and make sure that it is only such factors that prompt people to leave, and not dwindling of motivation or poor process that do so.

Thinking about these objectives, we argue that the idea of a membership journey made up of motivations, processes and triggers offers valuable tips for membership organisations on how they should engage. Our report offers further tips, advice and a checklist that should prove valuable for any organisation seeking to explain membership change or prescribe interventions designed to boost numbers, activate engagement and retain members.

Kate Dommett is Lecturer in the Public Understanding of Politics and Director of the Crick Centre at the University of Sheffield.