Chris Gilson looks at what campaigning was like in 1974, the last time there was a hung parliament – also a year when there was a second inconclusive election. And he explains how you can help write the history of this year’s election.

LSE’s huge Library is the national library for the social sciences. Anna Towlson runs the LSE Archives and got in touch last week to seek the help of Blog readers in continuing their unrivalled collection of election campaign literature. The collection dates back to 1945 and provides a unique insight into the development of the post-war political landscape, and the history of election campaigning.

Looking at the campaign literature from both election campaigns of 1974, in February and in October, shows how the October leaflets often explained why a second election was needed and how the parties could restore ‘stability’ in government.

From the LSE Archives, we have Ilford North Labour campaign leaflets from 1974 (click each to enlarge):

The earlier images from 1974 are for the February election that ended up with a hung parliament. Now we also have the following (also from Millie Miller) on the October 1974 election (click to enlarge):

The leaflet talks about how the incumbent minority Labour government has been ‘indecisive’ and ‘vulnerable’ to its opponents. It would be interesting to see if candidates in a May 2011 election would be so honest with prospective voters.

In October 1974, in Twickenham, Toby Jessel wanted your vote:

Jessel warns that a vote for Labour is a vote for the nationalisation of industries and the beginning of a ‘socialist state’. He also writes off the Liberals and supports the control of public spending, and the building of a new airport in Essex – two things that are arguably still on the agenda (albeit now across the Thames estuary in Kent) 30 years later.

In October 1974, the Liberal candidate for Marylebone (now Westminster North) Bernard Silver said that “Both Labour and Conservative have tried and failed. We must unite to beat the economic crisis which threatens us all, and rise above the class struggle perpetuated by this two-party system. Only Liberals can achieve this. One more heave!”.

While we don’t have a contemporary leaflet for the Lib Dems for Westminster North, the Liberal Democrats material from the nearby Holborn and St Pancras shows the changes in the way that elections ‘look’ in the last 30 years (click image to enlarge):

Campaigning has of course, kept pace with technology, and leaflets are glossier, more pictorial and have far less text – but the messages seem to be much the same over thirty years later.

Anna is currently collecting local election addresses and publicity materials produced by all the candidates for Parliament in next month’s general election.

Sending local leaflets and campaign ephemera in to the LSE Library could not be simpler. Just put everything eelction-related that comes through your letterbox in an envelope – the Archive can sort out what they want to keep – and send it to the Archive address at:

To find out more, visit LSE Archives’ Out of the Box blog. 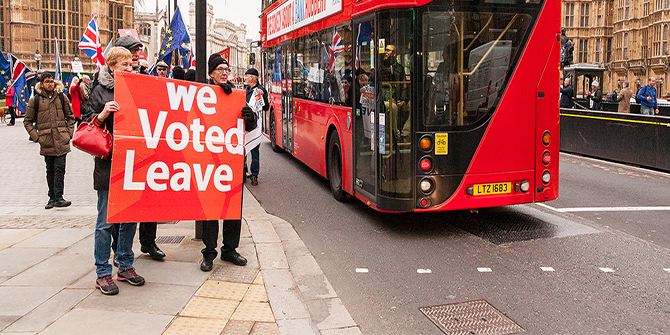