Special Rapporteur on violence against women 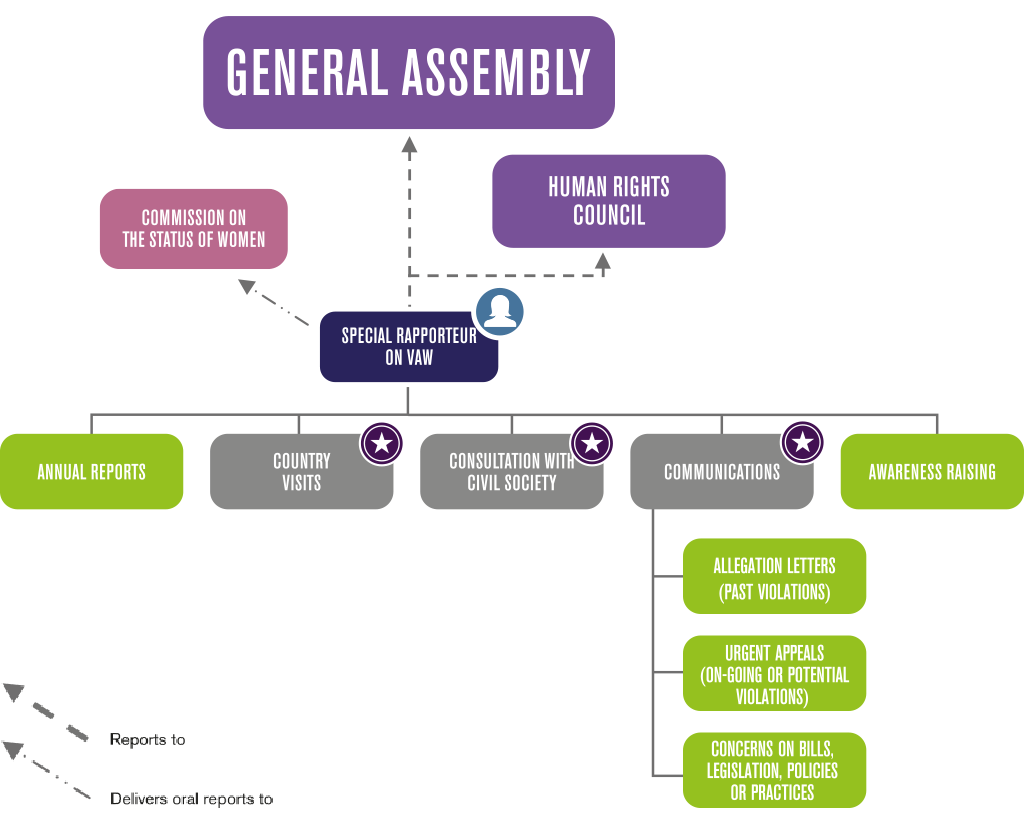 The Special Rapporteur on violence against women, its causes and consequences (SR-VAW) is one of the special procedures of the Human Rights Council. Special procedures are independent experts, working as individually (“Special Rapporteurs” or “Special Representatives”) or in groups (“working groups”), responsible for reporting and advising on human rights from a thematic or country-specific perspective. They are considered a central element of the United Nations human rights framework, and can be the first point of contact for human rights issues needing urgent attention.

In 1994, the SR-VAW was established by the Commission on Human Rights (predecessor to the Human Rights Council) amidst growing international recognition that VAW is a violation of women’s human rights and the specific human rights obligations states have to eliminate it. As such, the mandate calls on the SR-VAW to carry out her work through the framework of the Universal Declaration of Human Rights, Convention on the Elimination of All Forms of Discrimination against Women, Declaration on the Elimination of Violence against Women, Beijing Platform for Action (see Human Rights Council Resolution 7/24, 2008) and all other international human rights instruments.

Serving a 3 year term, once renewable, the SR-VAW is an independent expert responsible for (see also GAR 1994/45):

To accomplish these objectives, the SR-VAW is empowered to send communications to states in response to individual complaints received, undertake country visits to gather information on violence against women, pursue awareness-raising measures on the causes and consequences of violence against women and deliver annual thematic reports to the General Assembly and Human Rights Council. The expert also delivers an oral report to the Commission on the Status of Women annually.

Want more? Read “15 years of the United Nations Special Rapporteur on violence against women, its causes and consequences – a critical review” on the OHCHR website

Dr Dubravka Šimonovic was appointed by the Human Rights Council as the United Nations Special Rapporteur on violence against women, its causes and consequences in June 2015 and officially began her work on 1 August 2015. Within the first year of her work. Dr Šimonovic has undertaken country visits to Georgia and South Africa with a particular focus on women encountering multiple and intersecting forms of discrimination; urged states to establish a ‘Femicide Watch’ to prevent acts of gender-related killing; joined with other Special Procedures of the HRC to call for gender-based crimes to be looked at through the lens of torture; and called for an inclusive participatory process in updating General Recommendation No. 19 (CEDAW) – among other actions.

Want more? Dr Šimonović has delivered a vision-setting report to the Human Rights Council that can be accessed online

Use the links located on the right hand sidebar (or, for mobile users, at the bottom of this page) to learn more about the work of the SR-VAW – and how civil society can engage with this work.