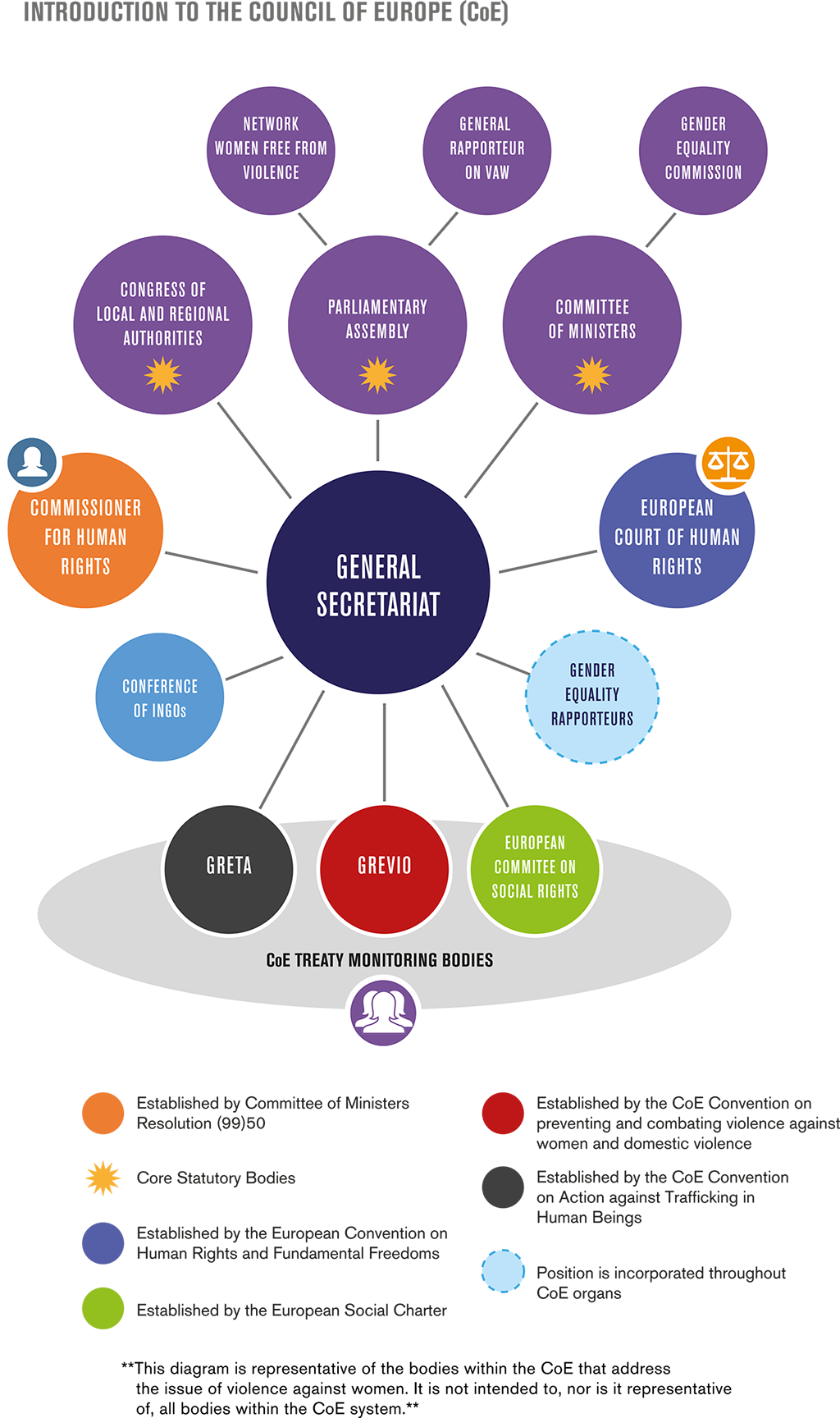 Founding document: Statute of the Council of Europe “Treaty Of London” (1949)

Member States of the CoE

Which bodies are most effective in tackling violence against women?

Each body within a system can contribute to gender equality and tackling violence against women, however some have more opportunities to do so than others. Read the descriptions below for a quick introduction to the main CoE bodies relevant to tackling violence against women or click the related link on the right-hand side of this page (or, for mobile users, at the bottom of the page) for more information.

In terms of scope, it is the most advanced treaty in the world – addressing violence against women as both a human rights violation and a crime – creating a holistic and comprehensive legal framework to prevent gender-based violence, protect survivors of violence and end impunity for perpetrators. [Read more…]

GREVIO is an independent expert body responsible for monitoring state implementation of the Istanbul Convention. Through a multi-dimensional reporting procedure, GREVIO coordinates with states to collect information on violence against women at a national and regional level. With this information, it issues a report with its findings and recommendations to the state concerned and the Committee of the Parties. These observations and recommendations may be transmitted to the Committee of Ministers for further action.

Civil society is also invited to participate throughout the process, including through the submission of parallel reports. [Read more…]

Group of Experts on Action against Trafficking in Human Beings (GRETA)

GRETA is an independent expert body responsible for monitoring state implementation of the Convention on Action against Trafficking in Human Beings. Through a multi-dimensional reporting procedure, GRETA coordinates with states to collect information on implementation of the treaty. It uses this information to review state progress toward preventing human trafficking, protecting victims, prosecuting traffickers, and promoting partnerships with civil society and the international community. [Read more…]

The European Court of Human Rights is the core judicial organ of the CoE that oversees member states’ compliance with the European Convention on Human Rights and Fundamental Freedoms (ECHR). The Court has the power to accept individual applications regarding a state party’s alleged violation of its human rights obligations, and may also issue advisory opinions on the ECHR. The Court has accepted and issued decisions on VAW-related issues. Through these decisions, human rights obligations to end gender-based violence are given contextual meaning and states receive practical guidance on appropriate action to be taken. [Read more…]

The Gender Equality Commission (GEC) is a steering committee of the Committee of Ministers. It works to ensure gender equality is mainstreamed into all CoE policies, bridge international commitments and on-the-ground realities of women in Europe and support the implementation of the CoE Gender Equality Strategy 2014-2017. Eliminating all forms of violence against women and improving women’s access to justice are two strategic objectives within the Gender Equality Strategy that guide the GEC’s work. [Read more…]

The Parliamentary Network Women Free from Violence is a group of parliamentarians from member and observer states working within the CoE Parliamentary Assembly that works to raise legal and policy standards for preventing violence against women, protecting victims and effectively prosecuting perpetrators. They also promote the Istanbul Convention by holding hearings on violence against women, parliamentary seminars to ratify or monitor the Convention and organising awareness-raising events and publications on thematic issues gender-based violence. [Read more…]