…“violence against women” is understood as a violation of human rights and a form of discrimination against women and shall mean all acts of gender‐based violence that result in, or are likely to result in, physical, sexual, psychological or economic harm or suffering to women, including threats of such acts, coercion or arbitrary deprivation of liberty, whether occurring in public or in private life.

Council of Europe Convention on preventing and combating violence against women and domestic violence, Article 3a

The Council of Europe Convention on preventing and combating violence against women and domestic violence (the ‘Istanbul Convention’) was adopted in May 2011 and entered into force in August 2014. It is one of two treaties in the world exclusively focused on eliminating all forms of VAW (see also the Convention of Belem do Para). And, in terms of scope, it is the most advanced treaty in the work – creating a holistic and comprehensive legal framework to prevent VAW, protect survivors of violence and end impunity for perpetrators.

The Istanbul Convention adopts a 3 ‘P’ approach that can be found throughout other CoE Conventions (see, for example, the Anti-Trafficking Convention on Trafficking):

Recognising that effective response requires more than measures listed above, the drafters also incorporated another ‘P’ into the Istanbul Convention’s framework: integrated Policies. These policies are not only aimed at tackling VAW through criminal law and proceedings, but also include policies aimed at promoting substantive equality between women and men. In this sense, the Istanbul Convention operates dualistically – as a human rights treaty and as a criminal law treaty, and seeks to build co-operation among all possible actors law enforcement,  the judiciary, NGOs, support services etc:

As a human rights treaty, the Istanbul Convention approaches VAW as a form of gender-based discrimination. This recognition reinforces States’ immediate obligation under international human rights law to end all forms of discrimination and guarantee substantive equality between women and men. Building on this principle (of non-discrimination), the Istanbul Convention contains the most inclusive non-discrimination clause in international law. In implementing the Istanbul Convention’s provisions, states are prohibited from discriminating against a list of categories which include, among others (Article 4(3)): sexual orientation, gender identity, migrants and women with disabilities. Article 12 also obliges states to produce transformative equality, through measures to “promote changes in the social and cultural patterns of behavior of women and men with a view to eradicating prejudices, customs, traditions and all other practices which are based on the idea of the inferiority of women or on stereotyped roles for women and men”.

As a criminal law treaty, the Istanbul Convention addresses all the sites at which VAW occurs (the family, the community, the state) and the perpetrators of those acts – states and non-state actors. It also lists and defines the forms VAW can take to identify specific criminal offences, which include:

By listing the forms which VAW can take, the Istanbul Convention dispels myths about the randomness or chance occurrence of the acts. Rather, it recognises VAW is deeply rooted in inequality and gender discrimination and requires states to criminalise the specific acts and take action to end them. Combined with the human rights principles of the treaty, states are thus obliged to prevent, investigate, punish and provide reparation for acts of violence perpetrated by both state and non-state actors. Some of these specific obligations may include:

This section is a summary of Professor Christine Chinkin’s presentation to the CEDAW Committee Working Group in charge of updating General Recommendation No. 19 and other women’s rights experts working in the NGO sector, academia and practice. 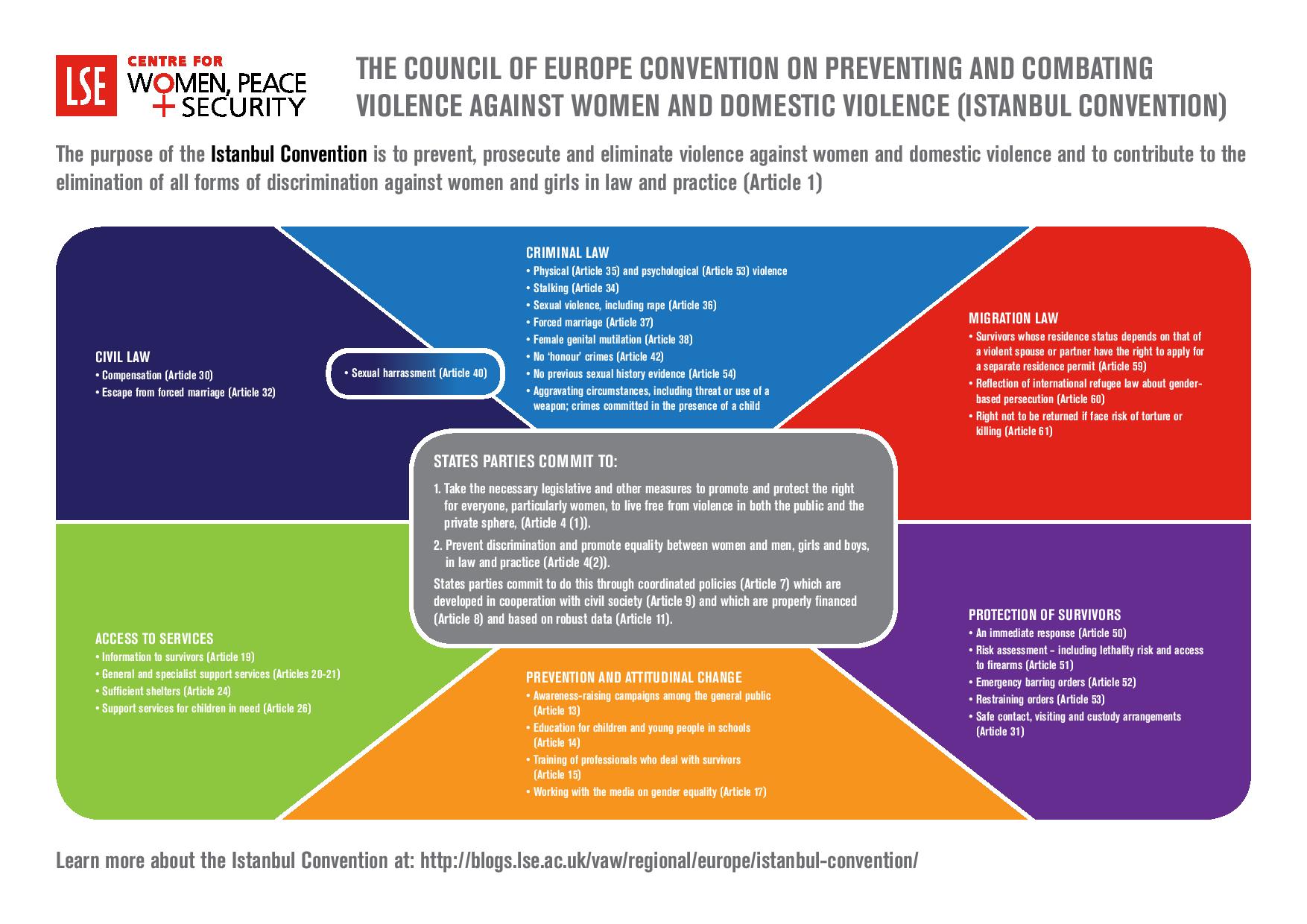 Under Article 78(2) states parties are allowed to reserve the right not to apply, or apply only in specific cases, certain provisions within the Istanbul Convention:

2   Any State or the European Union may, at the time of signature or when depositing its instrument of ratification, acceptance, approval or accession, by a declaration addressed to the Secretary General of the Council of Europe, declare that it reserves the right not to apply or to apply only in specific cases or conditions the provisions laid down in:

Want more? View a list of reservations by country

Case Study: ‘I Sign’
Campaigning for wider ratification of the Istanbul Convention

This case study has been prepared by Tanja Ignjatović and her colleagues at the Autonomous Women’s Center.

The I SIGN campaign is dedicated to the ratification and implementation of the Council of Europe Convention on Preventing and Combating Violence against Women and Domestic Violence. (The Istanbul Convention)

The Autonomous Women’s Center (AWC) and 27 regional and local partners from Serbia, Montenegro, Croatia, Bosnia and Herzegovina, FYR Macedonia, Slovenia, with the support WAVE and EWL Networks, have designed and conducted a four-year advocacy campaign.

That campaign is part of the Coordinated Efforts Project, which works toward new European standards of protection for women from gender based violence.

The general message of the campaign was “I Sign” – ratification and full implementation of the Convention. The idea was to create a message with which the largest number of citizens can identify, irrespective of gender, age, class, ethnicity, etc.

The partner organisations adapted their messages to their local context. The messages were conceived so as to motivate the citizens for action, to attract media attention and to exert pressure on the decision makers.

All the messages focused on the ratification of the Convention and fulfilling its standards. Over time, the pressure on decision makers to take responsibility was increased.

Means and media to convey messages

Classic marketing channels were used, aimed at reaching a broad cross-section of the population: public services announcements on TV, radio, in printed media and adverting posters in public spaces. Our budget was extremely limited, which is why we made pro bono arrangements with media companies (for example all media space in Serbia was obtained pro bono, and in Slovenia they received space that was 12 times larger than the invested financial means).

All the relevant information has been available on joint website, FB page and Twitter in 11 languages, including minority languages (Hungarian, Albanian, Turkish and Roma).

The most important part of the campaign was directed at encouraging citizens and numerous stakeholders to become involved. They could create postcards and messages to be sent to the key decision makers online or by post.

Actions were carefully timed to coincide with important dates and international events, such as the global campaign of “16 days of activism combating violence against women”. Actions were focused in cities with numerous participants, and utilised public spaces such as main squares, shopping malls, bus stops. Participation was taken at community events such as fairs, film and theatre festivals, expert meetings, so that the information could reach as many social groups as possible. Online communication and social media played an important part, in particular for young audiences.


Hundreds of people from public and political life supported the campaign.

The symbolic signing of posters, carried out by Mr. José Mendes Bota, General Rapporteur on VAW of the Parliamentary Assembly of the CoE and by many representatives of parliaments and governments, marked the beginning of the regional campaign “I Sign”.

Celebrities that have a resonance with a specific audience helped raise the levels of interest for the messages among the target public and the media.For example, the campaign in Serbia was supported by popular actors and actresses, journalists and sports people, such as Milica Mandić, Olympic champion in taekwondo.

I Sign was also supported by Croatian President Ivo Josipović.

An integral part of coordinated actions was advocating for changes of laws and policies on the national and local level. Partner organisations prepared proposals and amendments, built alliances and negotiated with decision makers.


We prepared common methodology on compliance of legislative and strategic documents with the standards of the Convention (two years prior to the questionnaire designed by the expert group GREVIO).

Baseline studies were conducted in six countries (most of which are available only in the local languages). They were distributed to all relevant state bodies and institutions.

Together, we prepared indicators for monitoring the implementation of the 51 articles of the Convention.

An online database is being prepared, which contains data from all 6 countries, regarding the 51 articles of the Convention (available only in the local languages). Assessment of the situation concerning each article was conducted on a scale from 0 to 4, thus making it possible to monitor the progress annually, to compare the situation in all the six countries of the region and to provide a graphic presentation of the situation.

The Commissioner for Human Rights of the Council of Europe, Mr. Nils Muižnieks has welcomed the ratification by Serbia of the Istanbul Convention and (re)commended “tools” developed by the AWC to monitor the implementation of this international treaty.


Advocating for changes of laws and policies in accordance with the standards of the Convention is a lengthy and unpredictable process.

Some such examples are:The President of Montenegro Filip Vujanović, at a meeting of leaders “Brdo-Brioni” process, held in Sarajevo on May 28 and 29 2016, addressed the issue of regional cooperation in preventing and combating violence against women and domestic violence.

The Ministry of Interior accepted the majority of comments that AWC had submitted to         the Draft Law on Asylum and Temporary Protection.

Member of Parliament, Professor Dušan Milisavljević, MD submitted for voting amendments on the Law on Police, related to police authorisation to issue “emergency protection measures” from domestic violence, for the third time.

Dr Dubravka Simonovic, UN Special Rapporteur on violence against women, its causes and consequences, spoke at the conference organized by the AWC, as part of the project activities.

The Convention has been ratified in 4 out of 6 countries in which the campaign was conducted.

Croatia started the process of ratification following the statement of the Prime Minister.

Campaign and advocacy actions had great visibility, drew attention of decision-makers, the media and the public. Citizens demonstrated readiness for active participation (signing and sending messages). The media showed readiness to give space for advertising materials and reports.