Right to equal protection under the law 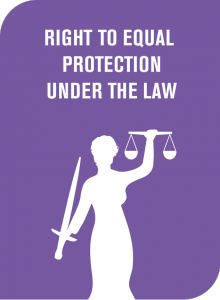 ‘Equal protection under the law’ requires more than the formal recognition of men and women’s equal rights in the text of the law. For any law to become meaningful, there are many authorities who must ensure it is enforced and protected on the ground. ‘Substantively’ guaranteeing women’s rights requires police officers, court officials and all other professions related to the justice system work together to end VAW. If gender-based crimes are not treated with the same concern as other crimes, women cannot be secure in their right to equal protection under the law. Sometimes this means addressing harmful gender stereotypes and practices that are accepted as normal and acceptable in day-to-day life, even though they are deeply discriminatory. If a community believes domestic violence is a matter to be resolved at home, it is likely that police officers will not address this type of violence with the same professionalism as in other cases. Similarly, if a judge believes that a man is justified in killing his wife for the sake of so called ‘honour’, his decision may not be the same as it would had the murder been a random act.

Click on the cases to the right (or, for mobile users, at the bottom of this page) to learn more about the right to equal protection under the law and violence against women.