Right to liberty and security of person 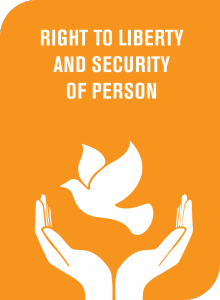 The right to liberty and security of person is a fundamental part of human dignity. It is a recognition of the equal worth of all human beings and a duty of others to respect that worth. Throughout history, the violation of this right has resulted in some of the worst assaults on humanity – slavery being one example. At its core, guaranteeing this right means every person is given the freedom to make independent decisions (without coercion) about matters that will impact his/her body. In the context of VAW, the paramount importance of this right is clear. Sex trafficking, for example, is a complete denial of women’s right to liberty and security of person. While under the control of the traffickers, women are kept in isolation – unable to contact anyone for help and locked in their living space. If they resist sex work, they also face rape, starvation and even murder. Against their will, women are forced into dangerous conditions and unable to make any decision about their personal security.

In other cases, this right may be violated when women are denied certain forms of health care. Despite the existence of laws that demand vital reproductive health services exist, other laws may allow health workers to deny these services on the grounds of ‘moral conscience’. Providing health workers the power to choose denies women the power to decide what will happen to them. This can eventually lead to other rights violations when services like abortion mean the difference between life and death for a woman. The Committee on Economic, Social and Cultural Rights has said [General Comment 22 on the right to sexual and reproductive health, 2 May 2016, paragraph 43]:

Where health-care providers are allowed to invoke conscientious objection, States must appropriately regulate this practice to ensure that it does not inhibit anyone’s access to sexual and reproductive health care, including by requiring referrals to an accessible provider capable of and willing to provide the services being sought, and that it does not inhibit the performance of services in urgent or emergency situations.

Click on the cases to the right (or, for mobile users, at the bottom of this page) to learn more about the right to liberty and security of person and violence against women.