Right to just and favourable conditions of work 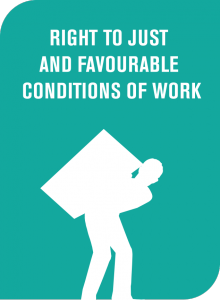 The ‘feminisation of poverty’ is a term used since the 1970s to describe the different social, cultural, political and economic patterns around the world that have kept women disproportionately poor. As a result of unresolved gender inequality that often places women in the private, ‘home’ sphere, many women who do work are often forced into informal and/or unstable employment. For example, the majority of domestic workers are women – many of whom belong to minority groups or are migrants. Very often these women are isolated and ‘subject to slave-like conditions’ among other forms of abuse (ICESCR General Comment No. 23) and are offered no formal protections from the state.

In areas where women are able to find formal employment, they also face an increased risk of violence against women. In February 2016, the United States Bureau of Justice Statistics reported that more than 43,000 workplace rapes and sexual assault occur each year. Other forms of violence can occur when an employer threatens to fire a woman for refusing to have sex with him. In these situations women are subject to physical, sexual and economic abuse, as employers use income as a way of disempowering women and controlling their behaviour.

Click on the cases to the right (or, for mobile users, at the bottom of this page) to learn more about the right to just and favourable conditions of work and violence against women.