Parents globally are concerned about teens staying up late and playing games with people around the world. But what do teens think? This blog reports on focus group interviews with teens in East Asia, who share why they enjoy gaming, attitudes toward ‘strangers,’ and privacy strategies. This is the second in a series of field dispatch reports conducted by Monica Bulger and Patrick Burton in East Asia for UNICEF’s East Asia and Pacific Regional Office in spring of 2019 [1]. [Header image caption: Middle school students in rural Jakarta respond to privacy questions during focus groups. Photo credits: Monica Bulger.]

We move unwieldy desks into a semi-circle. The room is hot, the temperature says 34 degrees, but at that point numbers don’t really matter. There’s no fans and only some of the windows are open to curb the bugs flying in. It’s a Saturday in rural Jakarta. The 11 students sitting in their crisp white and navy uniforms have come to school especially for our interviews.

We go around the room introducing ourselves, giggling with the teens at points when translation seems a challenge. We talk about what apps they’re using, how they access them, and then we talk about gaming. “We play with the world” one 14-year-old says, while her classmates lean in and murmur agreement. They play with their brothers and sisters in the same room and with local friends, too. Often they stay up all night playing games. “We chat,” a girl offers and then there’s clarification, most of the time it’s about the game, but it isn’t always. Most of the people they play with are strangers, but they don’t see them that way. The teens describe people they meet simply as people. They don’t know their ages, but figure many are their age. Two girls describe meeting another girl who goes to school in the same region. “I thought I was meeting someone new and then realised we knew each other on Mobile Legends.”

Days before, in another semi-circle miles away in a classroom in a shelter for street children in Kuala Lumpur, a 13-year-old boy tips his desk forward as he describes using Instagram, and WhatsApp, to promote the gaming trophies he’s won. His classmates roll their eyes and laugh. “This is a game, not icebreaking,” he responds vehemently when asked if he chats with people during games. “We say go here, go there, find people, shoot shoot shoot. Someone asked me, where are you from? And I’m angry, this is a game, so just shhhh and go play.”

While interviewing teens in Kuala Lumpur, Jakarta, Phnom Penh, and Bangkok, we learn that games are inherently social and everyone is chatting. At a prep school in Bangkok, 14-year-old girls share that they use gaming chat apps like Discord as spaces to discuss homework assignments. “Even our teachers are in the group,” one girl says and others chuckle in agreement.

Chat rooms for the most part seem like fun spaces, kids in all the countries we visit share anecdotes about meeting someone in a game who goes to school nearby and they’ve met in person. Even the Malaysian boy who said “no ice breaking” concedes he’s open to friendship if they’re “good at the game. High scorers only.”

Of course, there’s a darker side. Paediatric psychologists we interviewed in Malaysia share that Asian children in particular are vulnerable to Western-style encouragement in gaming. “In Asian families, they don’t give compliments,” one counsellor says, “so games are giving gratification, ‘well done’ or ‘you’re a winner’ that they aren’t getting at home.

Psychologists and social workers were also concerned about children’s (in)ability to distinguish fantasy from reality. A psychologist in Malaysia shared a case where a boy described suicide as a “reset.” In games, the boy explained, when your avatar dies, you get a fresh chance to play again. Counselling him after he survived a suicide attempt, the psychologist said their focus was on distinguishing between the game and real life.

At the prep school in Bangkok, administrators were working to unravel a puzzling case in which one of their female students met a boy on gaming app PubG whom her father suspects is a paedophile in the UK. As the girl describes the tensions between her father and online friend, she says, “He doesn’t want to give his address and I don’t think he should have to, but my father is angry.” She fiddles with a scarf the friend has sent her, curling it around her fingers and touching it to her lips as she talks.

Her classmates agree that it would be uncomfortable if the parent of someone they met online demanded their address. One girl questions whether the boy is actually a boy and not an older man, and the first girl says she’s Facetimed with him. Another points out that the Facetiming happened with someone, but online “you’re never sure who you’re talking to.” Finally, one classmate leans forward, grasping the first girl’s hands, saying, “but in the future, you know, maybe be more careful, because we don’t really know who he is and we don’t want to lose you.”

Wrapped within the fun of games, even the game of meeting people online, is an underlying awareness of the risks. While many of the teens we interviewed took precautions to protect their home address, they also felt that privacy was a losing battle. Strategies were endless, starting with multiple accounts and multiple screen names, but these were mostly to protect against parents or boyfriends/girlfriends finding info teens didn’t want to share. ­Consistent with recent LSE studies of children’s understanding of privacy in digital spaces, teens focused on contextual privacy from those in their immediate sphere.

When asked about protecting themselves from what the platforms collect and share, the majority were at a loss. A refugee in Malaysia shrugged and said:

‘Google knows everything about us,’
14-year-old girl, Kuala Lumpur

And her classmates agreed. A 14 year-old Eritrean refugee at another school in Kuala Lumpur went further, saying that if Instagram, or WhatsApp, or Facebook truly cared about their privacy and well-being, “hackers wouldn’t be able to hack us,” and strangers wouldn’t be able to contact them. Even knowing the risks, most teens took minimal precautions to protect their identity in games, applying their privacy strategies elsewhere, in Instagram, WhatsApp, and Facebook Messenger. 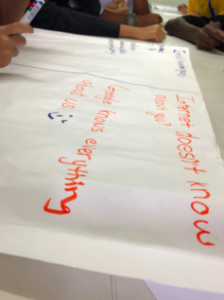 One Sunday afternoon, we meet with a small group of parents, grandparents, and teens in Kuala Lumpur. We sit in a colourful toy library in the midst of a massive low-income housing complex. Grandparents share that iPads and phones are used by many as babysitters. One parent observes that gaming is a gateway to social media. “It’s the first place she talked to strangers,” one parent says and the discussion turns to gaming as an entry point, as a place where talking to strangers becomes normalised.

There are precautions, choosing games where there are not multiple players, playing offline, but eventually, kids graduate to the more “fun” games that they can play with friends.

Back in the classroom in rural Jakarta, the heat is forgotten as we chat about Mobile Legends as a place to pass time, chat with friends, and play together. Distinctions between “online” and “real life” no longer hold. Gaming is where life happens. Like life, there are sometimes scary things to navigate, but there’s also opportunities. For the teens we spoke with, gaming has the highs and lows of normal teenage life and they’re figuring it out as they go.

This post is also available in audio form as a podcast.