On 27 November Andrea Shemberg, Visiting Fellow at the Laboratory for Advanced Research on the Global Economy (Lab), delivered a presentation about implementing the United Nations Guiding Principles on Business and Human Rights (UNGP) into investment policy at the 2019 UN Forum on Business and Human Rights in Geneva. The panel discussion offered Shemberg an opportunity to present the research she and Andrea Saldarriaga (also a Visiting Fellow at the Lab) had conducted on the scope and substance of what the UNGPs envision. She argued that while international investment reform has narrowly focused on reforming international investment agreements (IIAs) and investor-State dispute settlement (ISDS), the UNGPs envision that reform is needed across all government functions that promote, facilitate, fund, insure and protect investment. 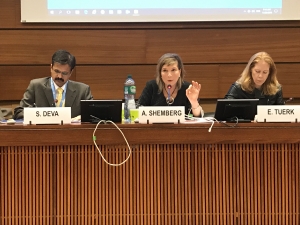 She also presented the six key issues identified through the research regarding what the UNGPs ask States to integrate into reform efforts. These six key issues aim to reshape traditional investment legal and policy discussions. They include:

1. Revisiting how we understand ‘investor protection’ to integrate the idea that investments are safer when they respect human rights.

2. Augmenting the current singular focus on the protection for foreign investors with a focus on addressing access to remedy in “cross-border” cases, where rules such as separate legal personality and practical difficulties such as gathering evidence across jurisdictions create special vulnerabilities for adversely impacted individuals and communities.

3. Recognising that States do not only have a right to regulate, but indeed a duty to regulate to meet their international human rights law obligations.

5. Improving transparency and disclosure across government functions relating to investment.

6. Recognising the need to create bespoke rules for investment taking place in conflict or post-conflict contexts.

The other panelists focused on UNCTAD reform efforts, efforts to reform IIAs in Uganda and eastern Africa and ideas for how future IIAs could improve access to remedy.  Shemberg argued that the human rights community should be more ambitious in two ways. First, they should imagine and pursue reform efforts across all government functions related to investment, not limiting reform to IIAs and ISDS. Second, she called for human rights advocates to imagine more creatively an international investment regime that is built from the ground up integrating these six key issues, which would represent meaningful shifts in thinking about investment policy. She argued that focusing reform on tweaking IIAs and ISDS cannot accommodate the shortcomings of the current international investment regime.