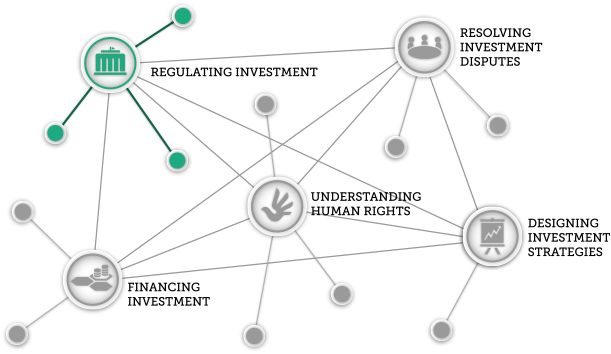 A ‘State-investor contract’ is an agreement between the State, or an entity representing the State, where an investment will take place (host state), and the business investor or investors. These contracts underpin investment projects in a number of industry sectors such as agriculture, infrastructure, energy, oil, gas or mining. These contracts can be called by several names such as:

The Learning Hub uses ‘State-investor contract’ to refer to all of these types of agreements. These contracts, along with domestic law and any applicable international investment agreement, set out the rights and responsibilities of both the State and the investor regarding the development, construction and operation of an investment project. They also establish rules that govern how the parties should resolve any disputes that arise. Importantly, these contracts allocate responsibility for managing risks in the project, including financial and non-financial risks, and generally also set out the fiscal arrangements for the project. Through these contracts, the parties may effectively agree a large part of the legal framework that will govern the investment, particularly where domestic legislation in the host State is under-developed, or where the project is in a nascent industry in the host State. In these cases, the negotiation between the parties may directly influence the applicable legal framework for the project.

State-investor contracts often govern investment projects of significant public importance. For example, the project may provide substantial revenue for State budgets, it may concern the provision of public services or the exploration of natural resources, or the use of large areas of land. Although there are growing exceptions, as a general rule, these contracts are not disclosed publicly.

One of the risks investors face when contracting with States is the State´s use of regulatory authority after the negotiation of the contract to change the conditions applicable to the contract. Investors mitigate this risk using tools such as political risk insurance or the inclusion of clauses in the contract that protect directly again changes in law, such as ‘stabilisation clauses’. These clauses may directly exempt an investor from compliance with changes in laws, provide for the payment of compensation to an investor to mitigate the costs of complying with the new law, or suggest another method for mitigating impacts on the investor’s compliance. Moreover, they are often considered to be essential for the financing of projects because they can ensure the stability of applicable fiscal rules.

These concerns attracted the attention of former UN Special Representative for Business and Human Rights, John Ruggie (‘SRSG’), and the International Finance Corporation (IFC), the private sector lending arm of the World Bank. The SRSG and the IFC conducted a joint empirical study of the potential of stabilisation clauses to interfere with the ability of States to fulfil their international human rights obligations. After analysing 88 contracts and models from a cross-section of industrial sectors from all regions of the world, the study concluded  – amongst other things – that some stabilisation clauses in modern contracts are drafted in a manner that could negatively impact a host State’s implementation of its human rights obligations.

Following the publication of this research, the SRSG conducted consultations with State negotiators, business enterprises, civil society and subject-matter experts over a period of three years in many regions of the world. Based on the learning from the research and consultations, the SRSG  submitted the UN Principles for Responsible Contracts to the Human Rights Council with his final report. The 10 Principles provide useful guidance for a range of practitioners, including commercial and State negotiators, on integrating human rights risk management into State-investor contract negotiation. While the UN Principles for Responsible Contracts include guidance on stabilisation clauses, they also address a number of other issues related to avoiding, mitigating and remediating human rights risks, such as community engagement, project monitoring and access to remedy by people impacted by projects.

Beyond the UN, State-investor contracts have attracted attention in recent years related to a number of issues that can relate to human rights. These issues include the fairness and distribution of project revenues; transparency of contract-related documents, such as social and environmental baseline studies and impact assessments; and the transparency of investors’ ownership structure. Attention has focused on contracts for projects involving the exploration or sale of natural resources, projects that pose significant social or environmental risks, and projects that represent a large portion of the State’s revenues. A number of advocacy initiatives aim to improve the transparency of these contracts and related materials based on the public interests at stake. Further, a number of important multi-stakeholder initiatives, benchmarks, standards and guidelines relevant to State-investor contracts and human rights have been produced in recent years. Many of these resources are contained in the State-investor contracts toolbox.