The link between investment treaty arbitration, transparency and human rights is not difficult to disentangle. Disputes involving an investor and a State implicate the public interest (and often human rights, such as access to water, public health and indigenous people’s rights), as well as the State purse.  Providing for transparency in investor-State dispute settlement (ISDS) promotes public awareness of and participation in disputes that touch on issues of public importance. It promotes the accountability of a State not only to its international law obligations pursuant to an investment treaty, but also to the broader public interest or human rights concerns of its citizens.[1]

In February 2011, Professor John Ruggie, then Special Representative of the UN Secretary-General on Business and Human Rights, delivered a statement to the UNCITRAL[2] Working Group on Arbitration and Conciliation (Working Group II), describing how work he had carried out in his business and human rights mandate could inform UNCITRAL’s discussions regarding ISDS.  Special Representative Ruggie’s statement urged the Working Group to take an expansive approach to transparency, noting that “adequate transparency in such arbitration processes where human rights are concerned is essential if societies are to be aware of proceedings that may affect the public interest and therefore their own welfare.”[3]

Three years earlier, in 2008, UNCITRAL had mandated its Working Group II to undertake work on transparency in ISDS, agreeing by consensus “on the importance of ensuring transparency in investor-State dispute resolution”.[4] That mandate was supported, inter alia, by a strongly worded written submission of the Government of Canada observing that a failure to endorse the need for transparency in ISDS in UNCITRAL’s procedural rules would be “contrary to fundamental principles of good governance and human rights upon which the United Nations is founded.”[5] 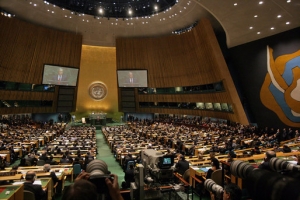 RAL’s Working Group II started its work on transparency two years later, in 2010. That work has culminated in two major texts: (i) the adoption of the rules on transparency in treaty-based investor-State arbitration, which came into effect on 1 April 2014 (the Rules); and (ii) a convention on transparency that was finalised by the Commission in July 2014[6], and will be submitted to the General Assembly for adoption later this year (the Convention).

In brief, the Rules, when they apply, provide a transparent procedural regime under which investment treaty arbitrations are conducted. They can be used in investor-State arbitrations initiated under UNCITRAL arbitration rules, as well as under other institutional arbitration rules or in ad hoc proceedings.  The Rules include provisions on the publication of documents, open hearings, and the possibility for the public and non-disputing treaty parties to make submissions. The Rules also provide robust safeguards for the protection of confidential information.

Once the Rules came into effect on 1 April 2014, States[7] could incorporate them into investment treaties concluded on or after that date.  But for the Rules to apply to disputes arising under the more than 3,000 investment treaties concluded before 1 April 2014, State parties to a treaty, or disputing parties in an investor-State arbitration, would need to agree to apply the Rules under that treaty or to that dispute.  Some delegates at the Commission expressed the view that a credible commitment towards transparency required a more comprehensive approach.[8] Cue the Convention, which provides an efficient, multilateral mechanism by which States can agree, subject to relevant reservations, to apply the Rules to all arbitrations arising under their investment treaties concluded before 1 April 2014.[9]

The work of UNCITRAL to promote transparency in investor-State arbitrations was not only the consequence of years of thoughtful negotiations between member States and observers at the UN, but also, it could be said, forms part of the zeitgeist.  Not only in investor-State dispute settlement has the trend been toward more openness, but also in treaty negotiations themselves – the European Union’s TTIP[10] negotiators holding public consultations on key investment protection and ISDS issues in the negotiations, including via a live Twitter chat[11], a case in point. ICSID[12] amended its procedural rules in 2006[13] to include, among other changes, provisions increasing transparency in its proceedings – and may consider further amendment to its rules to track the UNCITRAL work in transparency.[14]  Recent European and Inter-American Courts of Human Rights jurisprudence has construed the right to freedom of expression as inclusive of the right to receive information in certain circumstances.[15]  And recent model bilateral investment treaties and free trade agreements have also promoted transparency both in ISDS and in investment practices more generally.[16]

Separately, and in parallel to the broader global developments in the field of transparency in investor-State disputes, in 2011 the UN Human Rights Council endorsed a set of Guiding Principles on Business and Human Rights (UNGPs) proposed by Special Representative Ruggie. The Guiding Principles assist governments, business and other social actors better manage business and human rights challenges.[17] They are based on a framework comprised of three pillars: (i) the duty of States to protect against human rights abuses within their territory and/or jurisdiction, including by businesses; (ii) the corporate responsibility to respect human rights; and (iii) the need for more effective access to remedies for those whose rights have been abused.

The intersection between the Guiding Principles, on the one hand, and the UNCITRAL work on transparency on the other, lies both in their mutual espousal of procedural and legal transparency, as well as in their practical approach to achieving that aim.  The transparency engendered by the Rules underscores the good governance thrust of the Guiding Principles, and will rectify an oft-stated criticism with ISDS – namely that its (typically) confidential and non-participatory nature does not allow the publics affected by the issues in the dispute to follow the arbitration, nor to inform a strong balance between business-related policy objectives and human rights considerations.[18] In implementing the Guiding Principles, States can use the Rules and the Convention as a practical means by which to promote good governance and respect for human rights within a broader policy framework.

During the discussions at UNCITRAL as to whether it should undertake work on transparency in ISDS, the Government of Canada quoted part of Special Representative Ruggie’s 2008 report to the UN Human Rights Council, in order to emphasise that: “[w]here human rights and other public interests are concerned, transparency should be a governing principle.”[19] The Rules on Transparency, which came into force on 1 April 2014, and the recently finalised Convention, anticipated to be open for signature from 17 March 2015, comprise a critical step in achieving that aim.

* The views expressed are the author’s alone and do not necessarily represent those of the United Nations or the UNCITRAL Secretariat.

[1] Special Representative John Ruggie framed the nature of investment treaty disputes in less prosaic terms: “These are not issues of purely private transaction and consequence. Therefore, they cannot be conducted through an entirely private process if good governance is to have any meaning in practice.” See Statement to the UNCITRAL Working Group II (Arbitration and Conciliation), 54th session, UNHQ, New York, USA, 7 February 2011, (“2011 Ruggie Statement”).

[2] UNCITRAL, the UN Commission on International Trade Law, is the core legal body of the United Nations in the field of international trade law.

[5] See UN document A/CN.9/662.  Special Representative Ruggie also made a statement in support of the initiative, emphasising that transparency lies at the foundation of what the UN and other authoritative entities promulgate as precepts of good governance. See Statement to the UNCITRAL Commission, 41st session, UNHQ, New York, USA, 16 June-3 July 2008, (“2008 Ruggie Statement“).

[6] The text of the Convention will be available on the UNCITRAL website as an Annex to the Report of its forty-seventh session.

[7] The Rules define States to include a regional economic integration organization where it is party to a relevant treaty.

[9] The mandate of the Commission to the Working Group was framed as follows: “[T]he Commission agreed by consensus to entrust the Working Group with the task of preparing a convention on the application of the UNCITRAL Rules on Transparency in Treaty-based Investor-State Arbitration to existing treaties, taking into account that the aim of the convention was to give those States that wished to make the rules on transparency applicable to their existing treaties an efficient mechanism to do so, without creating any expectation that other States would use the mechanism offered by the convention.” See UN document A/68/17, para. 127.

[10] TTIP, or the Transatlantic Trade and Investment Partnership, is a trade agreement that is presently being negotiated between the European Union and the United States.

[12] The International Center for the Settlement of Investment Disputes.