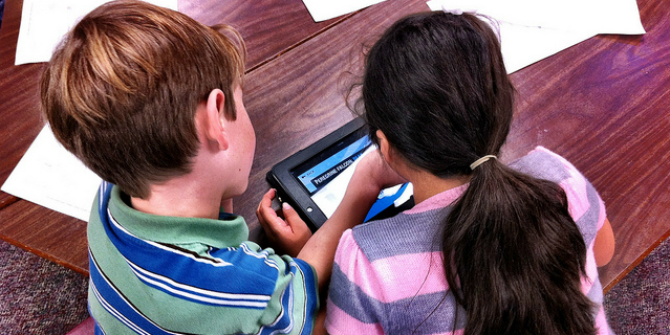 The American Academy of Pediatrics (AAP) has just revised its stance on screen time. Sonia Livingstone takes a closer look at the new recommendations and their evidence base. She argues that while the new guidelines fit better with the current circumstances of family lives, the AAP faces a dilemma: there isn’t yet a robust body of research on the effects of digital media on children, yet parents want guidance now. Sonia is Professor of Social Psychology at LSE’s Department of Media and Communications and has more than 25 years of experience in media research with a particular focus on children and young people. She is the lead investigator of the Parenting for a Digital Future research project. [Header image credit: K.W. Barrett, CC BY 2.0]

From the days when television was the main screen at home, well before today’s influx of tablets, smart phones, games consoles and laptops, the American Academy of Pediatrics (AAP) formulated its famous 2×2 screen time recommendations for families: no screen time for children younger than 2, no more than 2 hours per day for older children.

Now the AAP has revised its recommendations (21/10/16), given that the media environment in homes is changing fast, as is the evidence about its possible impacts. The new recommendations include:

At stake is the strong claim that screen time is displacing social, cognitive and physical activities that are important for child development. Although concern over the effects of exposure to particular media contents remains, since media can have positive or negative effects, depending on content and context, and since all these effects are difficult to establish conclusively, the AAP urges that parents actively monitor the overall balance of activities in their child’s day, and ensure that time spent with media is actively interpreted and engaged with rather than passively absorbed. So the call on parents is crucial.

The new recommendations are not as simple as the headline-grabbing ‘2×2’ rule that has embedded itself into parents’ consciousness and consciences far beyond the US context for which it was designed. But they do fit much better with the present circumstances of family lives – more media at home, used for multiple and often valuable purposes, as part of diverse family cultures; certainly no longer something parents can simply police or ban. Indeed, many parents have embraced a media-rich home for their children precisely in the hope that this will bring real benefits and guide their children towards a future of digital work and digital opportunities.

Still, some critical questions arise in trying to match these recommendations to the evidence, on the one hand, and to the practical realities of family life on the other.

Does the evidence really support the new AAP recommendations, as they claim? To check this out, I have read their lengthy technical report and their linked policy statements on younger children and older children and teens.

Herein may lie the AAP’s dilemma – there isn’t a robust body of research on the effects of digital media on children, yet parents want guidance now. So in their report the evidence, such as it is, is laid out. But the link from the evidence to the recommendations is not as strong as one would hope. No wonder that the AAP explained a few months ago that its approach will be conservative, recalling how long it took to recognise the harms of poor diet and arguing that the media – like diet – can be healthy or problematic, depending on how it’s managed.

Do the recommendations really provide parents with what they need to meet the challenges of today’s digital environment? Here I draw on the in-depth interviews with 70+ families from our research project, Parenting for a Digital Future.

In our research, we have been struck by how self-critical parents are of their own parenting practices, often defining ‘good parenting’ as ‘media-free parenting’ – which is tough in a media-saturated world where learning, work and social connections are increasingly mediated. They castigate themselves for not providing enough free play or sports outside, for handing a child a tablet when either child or parent is exhausted, and they tend to read time in front of a screen as ‘bad’ because it’s ‘screen time’ even when children are chatting, playing, or just relaxing after a busy day.

Behind a lot of the AAP’s evidence and recommendations is not so much the idea that screens are bad for children but that social, cognitive and physical activity is good for children. It would be interesting to see more emphasis on this positive point. For what parents really need is encouragement in these uncertain and pressured times. It seems to me that the advice they really need is to spend less effort counting screen hours or worrying about whether there’s a screen in the room where a child is studying or playing or, indeed, whether they’re a good enough parent – so they can be free to share in and enjoy lively, confident and pleasurable time with their children, whether or not there’s a screen involved.