The idea of a European Exclusive Economic Zone (EEEZ) is still at an embryonic stage. Europe is yet far from having a common policy on matters of energy resources or offshore drilling. Nevertheless, the Greek government has announced its intention to invest on the prospect of a European EEZ as a way of both opening up the geopolitical game around the Aegean energy reserves and deflecting attention from its failing reform policies. This article assesses the possible motivations behind this strategic decision and reads it within the wider framework of the European crisis.

A new term has recently entered Greek foreign policy discourse, that of a European Exclusive Economic Zone (EEEZ). Greek Prime Minister Antonis Samaras evoked it at a meeting of the European People’s Party in Athens last week in what many described as a political manoeuvre that sought to inscribe Greek energy security considerations within a wider European framework. Samaras’ statement can hardly be misunderstood: ‘Greek oil reserves are European too’. Despite the fact that many commentators consider references to a European EEZ to be premature, it is one of the few instances that the PM’s move has prompted positive reactions from the leftist opposition SYRIZA. Greek SYRIZA MP, Giorgos Stathakis, did not hesitate to describe it as a potentially ingenious initiative that could favourably displace the issue of the Greek EEZ from the narrow national level to the broader European geopolitical terrain.

Samaras’ reference to a European EEZ may well reflect Greek foreign policy anxieties vis-à-vis its difficult neighbour, Turkey, but the PM’s timing is hardly accidental. It coincides with the European Commission’s drafting of a report that is to be concluded in April estimating the costs and benefits of potential European initiatives across a range of sectors (energy, environment, fisheries, research, transport). Part of the report’s objective is to gauge the prospects of European concerted actions on energy security or detect possible domains of economic cooperation short of dictating specific policies to the European coastal states. Furthermore, it should be noted that the European Parliament is also preoccupied with the future of European energy security. Today’s Plenary (14 March 2013) discussed and approved a report by the Greek MEP Mrs Niki Tzavella entitled “EU Energy Roadmap 2050”. The report highlights the emerging interest in oil and gas reserves in the Mediterranean as well as the urgent need for a comprehensive EU policy on offshore drilling. It also goes further noting that emphasis should be given to the dangers of potential disputes arising either between Member States over EEZ demarcation (see here the controversy between Spain and France after Paris’ decision to unilaterally declare EEZ in the Mediterranean) or with third parties. Finally, the report calls for the harmonization or streamlining of the Member States EEZs with the United Nations Convention on the Law of the Sea (UNCLOS) of which the EU is a signatory. 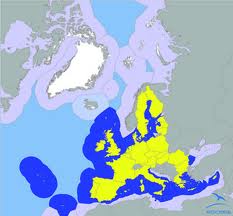 The latter prospect may partly explain Greek foreign policy motivations. Pursuing the country’s vested interests in the Aegean under a European energy umbrella appears as a good strategy to persuade a recalcitrant Turkey to avoid tension and comply with European rules and directives. At the same time the Greek government is desperate for some good news or signs of success that would deflect attention from the austerity measures. The domestic front seems to be relatively stabilised as shown by the limited reactions to the latest austerity programme agreed with the Troika. The Greek populace seems to be exhibiting a remarkable patience and resilience but tangible results need to be produced soon as time and patience are running out and no relaxation of the austerity measures is visible in the horizon. However, there is a sense that this is the last chance of the country’s political class to own up to its pledges. As Greece is entering the fifth year of negative growth, the so-called structural reforms are still progressing very sluggishly if they are progressing at all. The Greek political system seems hesitant to proceed with the urgent reform of the tax collecting system, the re-structuring of state bureaucracy or the reforms in education and the justice system. Some improvement in the numbers and the reduction of the fiscal deficit are more or less a result of major and irrational cuts of public spending that were based on no previous careful planning or assessment of their long-term effects and are thus bound to yield only circumstantial benefits.

Given the political system’s resistance to adopting an effective reform agenda that would dismantle its clientelistic networks, foreign policy presents itself as a glorious terrain for injecting hope to a demoralised population. In an oft-repeated act of national self-deception, the prospective Aegean gas and oil reserves are heralded as the future ‘El Dorado’ that will save Greece from bankruptcy and the political system from the need of delivering painful reforms. In the meantime, Greek politicians use the EEEZ discourse opportunistically as a tool of diffusing domestic tension and mobilising popular support. Greece may have very good chances to be back on the energy map but not because the country’s largely discredited political elite prematurely invests on a European EEZ. Unless a well-devised and credible European energy plan is put in place including the Mediterranean hydrocarbon reserves within a wider European geopolitical response to the crisis, there are few reasons to be optimistic.

1 Response to ‘Greek’ Expectations: broaching the case for a European Exclusive Economic Zone