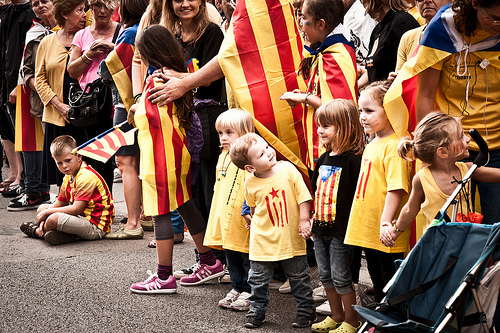 On 11 September 2013 hundreds of thousands of people formed a human chain to demand the secession of Catalonia from Spain. This well organised and largely peaceful display of patriotic fervour coincided with celebration of Catalonia’s national day, Diada, and aimed to return the attention of the international media to the issue of Catalan independence. “Mission accomplished” claimed the organisers and sponsors of the event, including the Catalan regional government Generalitat. They describe Catalonia’s independence process as an accelerating train that will not stop until it reaches the inevitable final stop of independence.  Nationalist political leaders and commentators have already warned (the rest of) Spain to clear the path and not to interfere or a crash of trains is to take place. The latest opinion polls and mass mobilisations suggest that many Catalans have taken their estelada flag and jumped onto the train with the hope of leaving Spain and the economic crisis behind. However the final destination may not match the idyllic depiction passengers were given before the trip. Worse even, there are great (and increasing) risks of derailment of the train to independence.

Catalan independence is gathering a noticeable amount of support among activists and political movements abroad. Many of them have a simplified and idealised vision of the situation in Catalonia and see this cause as another liberation movement in the line of the anti-colonial struggles in Africa or Asia during the 20th century. But are Catalans voiceless, oppressed and/or exploited by Spain? Would Catalan independence contribute to a more egalitarian world? The answer is no.

Catalonia is one of the richest autonomous communities and the biggest economy in Spain. It displays better levels of public services, education, industrial development and occupation than the majority of Spanish autonomous communities. It also has arguably the most vibrant cultural life in Spain. The tax revenues collected in Catalonia are crucial for the redistributive function of the Spanish government. The GDP per capita in Catalonia is 18% higher than that of Spain and 70% higher than that of Extremadura, the poorest region in the country. One of the most popular arguments in the nationalist rhetoric is ‘Spain steals from us’ (‘Espanya ens roba’). All Catalan nationalist parties including the left-wing ERC and ICV have claimed that there is excessive solidarity within Spain and that a much larger share of the taxes collected in Catalonia should stay in Catalonia. 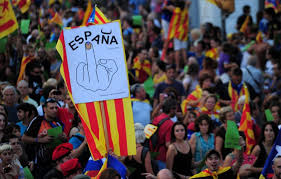 This anti-redistribution argument is the most compelling among those used by Catalan nationalists and most Spaniards would be in favour of renegotiating the autonomous communities fiscal and redistribution model. However this argument does not justify the claim for outright independence and seems to resonate more with the stance of the Padanian Lega Nord and Flemish Vlaamse Beweging than with the anti-colonialist ideal many foreign sympathisers of the Catalan nationalist cause have in mind.

Nationalist leaders claim that an independent Catalonia would be like the Sweden, Netherlands or Massachusetts of the south of Europe. Although Catalonia is a rich region, it is very far from these benchmark cases. According to an EU study, Catalonia has the worst regional government in Spain in terms of corruption, effectiveness and accountability, with a level comparable only to some regions in Greece, Italy and former Eastern Bloc countries.  The area is suffering the consequences of economic crisis and scandals of political corruption as the rest of Spain. Its regional government is the most indebted in the country in absolute terms and the third most indebted relative to its GDP. The Catalan government has seen its credit rating slashed by all credit agencies and is unable to finance itself in the markets. In addition to this, an independent Catalonia would automatically exit the EU and would have to renegotiate membership with the threat of a Spanish veto. Indeed, several business associations are warning against independence and hundreds of companies are relocating to Madrid.  Due to these problems and uncertainties it is extremely difficult to have an optimistic view about the scenario of an independent Catalonia. In fact, this process of secession seems a typical case of ‘gambling for resurrection’ where the Generalitat takes a highly questionable and risky path with the hope to divert people’s attention away from internal problems such as corruption scandals, unpopular austerity cuts and loss of electoral support.

Freedom is also popularly claimed as a reason for independence. An LSE Catalan academic recently claimed that ‘Catalans are trapped within Spain’. Catalans are as ‘trapped’ within Spain as the inhabitants of Valencia, Galicia or Madrid. Catalan participation in Spanish media, academia, corporate boards and diplomacy is well over the country average. For years Catalans (16% of the Spanish population) counted for up to 40% of the Spanish representatives in the EU. In an independent Catalonia its citizens would be equally ‘trapped’ in a smaller country and would not enjoy different rights or individual liberties. Catalonia has currently a degree of self-government among the highest obtained by any region in Europe. An independent Catalonia would be a more centralised state than today’s Spain. Its capital Barcelona would host about half of its total population and there would not be any city to rival or counterbalance its influence. Nepotism and corruption would be unlikely to decrease.

A cause to honour history and difference? 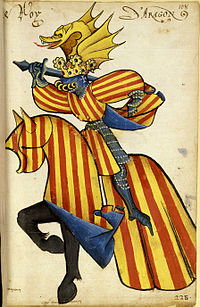 One of the weakest arguments wielded by nationalists is the historical one. According to some of them Catalonia needs to recover its lost independence.  The current territory of Catalonia has been always part of other larger political units in the Peninsula. Initially inhabited by Iberian tribes, it consecutively became part of the Roman Hispania, the Visigothic kingdom and the Muslim Al-Andalus. The Frankish Empire conquered parts of the current territory of Catalonia from the Muslims and in 801 established the Barcelona County which was incorporated into the Hispanic March. By the end of 10th century Barcelona County became hereditary and autonomous. In 1137 it was integrated through dynastic union to the Crown of Aragon. The County of Barcelona remained loyal to the King of Aragon until the Spanish Crown was created with the union of the Crowns of Castile and Aragon in 1469. Except during the period of the ‘Reaper’s War’ (1640-1659) when supported by France it became de facto independent, Catalonia has always been part of Spain. It was also one of the regions in Spain that most benefitted from its colonies. Coincidentally, the first Catalan nationalist parties, predecessors to those claiming for independence today, were created immediately after Spain lost its latest colonies, Cuba, Puerto Rico and Philippines in 1898.

The Catalonian population and economy are extremely intertwined with the other Spanish autonomous communities, and there are no ethnic or religious differences. Although Catalonia has its own language (as do several other Spanish regions), most Catalans have Spanish as their first language (56% vs 35% for Catalan). Nobody would deny that Catalans possess some distinct traits, but so do the inhabitants of most other Spanish regions. Spain is a multicultural country with a multitude of local, regional and national overlapping identities. It is impossible to objectively claim that Catalans are more dissimilar from Aragoneses or Madridians than Andalusians or Canarians. Even if this degree of difference could be measured it could hardly be rewarded with more rights or privileges. The fight for independence is not a fight in defence of plurality and diversity but a fight for a smaller and more homogeneous society.

Despite the abovementioned misconceptions and problems, Catalans have the right to pursue the political goal of independence. In democratic systems with commonly agreed rules any major change in the status quo requires an important amount of negotiation and persuasion. Spain is no exception to this. The Spanish Constitution, voted in 1978 by 91% of Catalans, prevents any process of secession in Spain. However, the Constitution can be modified. Thus, if pro-independence Catalans want to change the current (constitutional) status quo they need to convince the rest of Catalonia and Spain that this is a viable option. This means showing that those who are not particularly in favour of independence will gain or at least will not be worse off if that option is agreed.

Unfortunately Catalan nationalists are not particularly taken with this approach. Rather than convincing the rest of Spain of the need and benefits of a change in the status quo, they are planning to impose a unilateral solution: an internal consultation and unilateral declaration. With this solution the rest of the country would not have the capacity to express their views on an issue that strongly affects their future. Nationalists are increasingly using popular sentiment to legitimise their (extra-legal) process of independence. The extravagant utilisation of flags, uniforms, propaganda (including the indoctrination of children), censorship and popular displays of nationalist fervour may have been good to enhance visibility and quickly gain support but they have also created alienation and frustration among those that do not share the nationalist ideology or embrace multidimensional identities. The fast polarisation of a society and the imposition of a (government-sponsored) monolithic political vision have been rarely conducive to any democratic outcome. The demonization and mockery of the rest of Spain is rendering the democratic processes of dialogue and persuasion more difficult. While claiming that Spaniards do not understand Catalonia, Catalan nationalists have shown little understanding of other Spaniards’ feelings and attitudes.

International allies, including the EU and USA, do not consider a unilateral secession that would bridge legality within a democratic state acceptable. They request Catalan nationalists to negotiate with the rest of Spaniards within the framework of Spanish laws. According to the Generalitat, 47% of Catalans would prefer an independent state. However, since the first statistical records, anti-secession feelings have always been predominant in Catalonia and the rest of Spain. Even if supporters of independence become a majority in Catalonia in the future, secession would remain highly questionable. Democracy is not simply the rule of the majority (in this case simply a majority of a subset). Laws and in particular constitutions exist in democracies precisely to avoid giving in to temporary moods of majorities and preserve the right of minorities. In democracies, secession referendums are extremely rare and in the few cases that they were organised, such as in Quebec or Scotland, they always counted with the acquiescence of the national or federal parliaments that represent the totality of the citizens of the state.

In sum, although Catalan nationalists have the will to split from Spain they do not have the (legal or military) means to do so unilaterally.  They have managed to disguise as a debate about democratic principles what is in reality a debate about territorial units. Dividing Spain into two smaller states would not produce any economic, social or cultural benefits for the large majority of Catalans and other Spaniards. Nor would it reinforce democratic practices such as redistribution, solidarity, transparency or freedom. The independence train should decelerate for the safety of its passengers and those that chose not to take this train. The safety instructions in case of collision or derailment should be also distributed quickly.

101 Responses to The independence of Catalonia: jumping on a bandwagon