on the reasons that underpin Catalonia’s claim for independence, and Europe’s need to seriously discuss the need to regulate ‘internal enlargement’. Yet, the complexity of the situation has sometimes given way to inaccurate interpretations of what is happening and, especially, of why a majority of Catalans have gradually embraced the option of independence to the detriment of other options that were more popular some years ago.  Last week Jose Javier Olivas posted an article on the LSE Blog Euro Crisis in the Press which provides, in my view, one of these inaccurate interpretations that nurture the increasing lack of commonality of ideas, preferences and values that nations such as the Spanish one are expected to have (see Alesina and Reich, 2013).

Are Catalans not for redistribution?

One of the reasons for independence that has attracted most of the media attention refers to fiscal redistribution. Catalans, it has been argued, simply believe that too much money is taken out of their pockets to assist other parts of Spain. However, the latter reflects a deep misunderstanding on the ills of the Spanish redistribution system. Solidarity is a concept to which ascribing an exact figure is an arduous task and everyone would agree that zero per cent is too little. But here is where the consensus ends. The fiscal imbalance – i.e. the difference between what Catalonia contributes through taxes to the central state and what it receives back with transfers and services – is around eight per cent of the GDP in 2009[1] (see p.57). Is this too much redistribution, as many Catalans claim? This is a normative question, and as such, difficult to answer. Therefore, one interesting and, arguably, reasonable way to answer this question is to carry out an international comparison. Economics research shows (see an example here and here (p.12-22) that the fiscal imbalance that Catalonia suffers from the rest of Spain is unparalleled in other regions of the developed world.

Another interesting and rather common way to answer the question is to evaluate whether a region pays its taxes according to its level of wealth and receives public services in line with its expenditure needs. If we follow that route, we find that Catalonia, excluding capital agglomerations (e.g., London), has an unprecedented fiscal imbalance. Several studies pinpoint to two main reasons to explain the existing fiscal imbalance:

First, there is a substantial gap between the percentage of decentralized expenditure and the income in the hands of the Autonomous Communities. This is a recurrent problem in decentralized and federal countries, which, according to fiscal federalism theories, can be solved via equalization transfers. In the Spanish case, however, these transfer mechanisms are part of the problem rather than a solution. After activating them, the Autonomous Communities with an initial higher fiscal capacity end up with fewer resources than other Autonomous Communities with an initial lower fiscal capacity (see Table below). 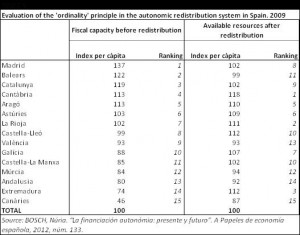 Secondly, this situation is worsened by the investment criterion in place for the distribution of infrastructure and public spending. The existing literature (see for instance BOSCH, Núria, ESPASA, Marta i SOLÉ-OLLÉ, Albert. The political economy of inter-regional fiscal flows. Cheltenham: Edwar Elgar Publishing, 2010) identifies three criteria to determine regional redistribution: efficiency, redistribution and equity. The empirical evidence for the Spanish case, however, suggests that other political criteria, such as the willingness to connect the political capital to the rest of Spain has prevailed, especially in funding roads and railways. Comparisons between Catalonia and other regions in Flanders and Northern Italy are delusionary. Catalans have shown a commitment to redistribution, they are just not  going to be taken for a ride.

Heterogeneity as a threat

It is important not to forget, other non-economic issues have also played a very relevant part in the height of the independence movement. Jose Javier’s article suggests that the movement is ‘a cause to honor history and difference’, which insinuates that two important reasons why Catalans want to be independent are its differential traits compared to the rest of Spain and its distinct history.  Once again, this is, I believe, a misperception of the reality. It is not the intensity of the differential traits that worry Catalans and drive them to claim an own state, but rather the widespread belief that there is a historical threat to the Catalan language– laying at the heart of  Catalan culture – which has persisted until today. Although it is clear that Catalans do not face persecution for speaking Catalan, Catalan still does not have the status of an official EU language (in contrast to Gaelic, spoken only in some areas of Ireland or French in Canada) . The recently passed Education Bill has not helped the unionist cause either. In its intervention in the Spanish Parliament, the Education: the Minister recently declared his intention to “Hispanicize” Catalonia and its schools through a new education law. This was an unfortunate statement given the oppression that the Catalan language suffered not so long ago with the dictatorships of Primo de Rivera and Franco. The statement was accompanied by a new education law which threatened to end the Catalan status as a medium of instruction in school and demanding the language to be ranked behind English in the curriculum. The Catalan compulsory education system uses Catalan as a medium of instruction for all subjects taught. This language –immersion used in the education system has been widely recognized at an international level as a system that enhances social cohesion and avoids discrimination by reason of language (here, p.140) (and in turn guarantees an above average proficiency of Spanish). Given that most media is in Spanish, Catalan citizens are as a matter of fact bilingual. The law, which also aimed at institutionalizing religion and centralizing education, was received with enormous outrage by Catalan politicians and citizens alike and sparked large protests in Catalonia. It has been described by some as ‘ideology cloaked as technocratic reform’.

Although history is not irrelevant, that claim it is used by Catalans to demand a new state is again far from real. The historical contextualization of certain demands is only a frame to provide an account of the trajectory of Catalonia so far[2]. Yet, to properly understand the pro-independence movement, one needs to understand first what it is not. It is not a movement grounded on anti-redistribution, but rather on claims that fiscal redistribution is arbitrary. It is neither a movement based on historical premises. And last and not least, rather than a rejection of a multicultural state it is a last resort when the Spanish state rejects its multicultural status.

In sum, Catalan independentism seems instead a movement born out of frustration as explained in other LSE posts. The latter rocketed after the Constitutional Court ruling in 2010 abolished several key passages of the new Catalan statute of autonomy as a result of a fairly specific interpretation of the 1978 Spanish Constitution.

Today, an overwhelming majority of Catalans (71% in the latest poll CEO) want to hold a referendum to attain their ’quiet revolution’. As Sociologist Manuel Castells puts it: “The unthinkable is possible. Independence, a majority sentiment the day it exists, it is possible, despite the constitutional pundits”. Highly reputed constitutionalists have come up with five legal ways within Spanish law to authorize a referendum. So far, the Spanish government has refused discussion on absolutely all of them. Loyalty in plurinational democracies requires ‘voice’ and the possibility of ‘exit’. Currently, both have been denied to Catalans by the Spanish state.

[2] As a side note, I find puzzling Jose Javier’s attempt to reinterpret history as well, by claiming that ‘Catalonia has always been part of Spain’. This was obviously not the case before the unification of the Crowns of Aragon and Castille, but I understand that the author refers to the period after the unification. But even after the unification the two crowns remained separate countries to a large extent, preserving their own laws, language, government and currency

42 Responses to A Bandwagon with a Purpose: The independence of Catalonia