“This is an existential challenge for Europe”- interview with George Pagoulatos 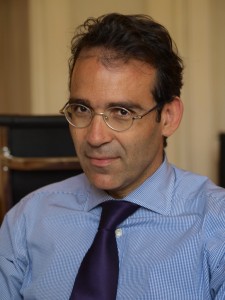 Continuing our conversations with public intellectuals across Europe on the causes and effects of the crisis, Euro Crisis in the Press talks to Professor George Pagoulatos, advisor to former Greek PM Papademos and member of the Board of Directors in Greece’s foremost defense and foreign policy institute, ELIAMEP. Professor Pagoulatos argues that muddling through the European crisis is no longer enough and that more ambitious integration is needed for catastrophic disintegration to be averted. In the case of the Greek austerity programme, he regrets that a more symmetric distribution of the adjustment cost across a more extensive time period was a road not taken by the European partners largely due to the country’s credibility deficit. Professor Pagoulatos also alerts to the rise of populist and extremist forces in Europe and calls for a relentless judicial prosecution of the particularly egregious neo-Nazi phenomenon in Greece. Finally, he deems that a way out of the crisis requires national-level fiscal responsibility, adjustment, and reforms in the South, together with greater solidarity, burden-sharing and integration across the Eurozone.

Professor Pagoulatos, there is little doubt that Europe is undergoing an unprecedented crisis. The crisis itself can be seen as having multiple dimensions: a financial crisis of the Eurozone and the Euro as a common currency, an institutional EU-wide crisis, a crisis of the European post-war social and economic model or even a European identity crisis. From your point of view, what is the most important aspect of the crisis?

Clearly, this is a crisis which is actually being felt on the ground, not just by way of its macroeconomic implications or its impact on balance sheets or the EU inter-institutional balance, but by its disturbing capacity to affect people’s lives – be that unemployment queues or severe income and welfare deterioration, or deep insecurity about the future. But attempting to take a step back, I would say that perhaps a most important aspect of this crisis is that it is testing the extreme limits of the capacity of EU institutions and Eurozone member states to devise collectively beneficial “win-win” compromise solutions that can overcome this European crisis and move integration forward. This time around, muddling-though will not be enough, more ambitious integration is needed for catastrophic disintegration to be averted. This crisis has opened a wide rift between the Eurozone “North” and “South”, an economic, political, and mental rift. A “grand bargain”, an historical compromise solution among Eurozone member states, that will make the euro sustainable for the next generation, is not inconceivable, as the four EU Presidents proposals demonstrate. But it will be harder than ever in the past to achieve it. This is an existential challenge for Europe as we have known it.

The widely shared public discourse in the media pits the proponents of austerity against those who call for growth-oriented policies. Do you think this is a real dilemma? What policy responses would be most appropriate?

Greece entered the 2009-10 crisis suffering total inability to finance its debt, a huge primary budget deficit over 10% GDP, an unsustainable current account deficit in the 15% GDP area, and a long period of reform inertia that had created an urgent need for long-delayed, far-reaching structural reforms. Greece entered the crisis with an unsustainable debt-driven growth model, based on a borrowing bubble, an overbloated non-tradables sector, and excessive levels of consumption, public and private. All these needed to change fast because they were not sustainable. The deficits had to shrink, far-reaching structural reforms had to be finally implemented, and the growth model had to become more export-oriented. It is irresponsible to say that such large scope of adjustment could have taken place without austerity. But the problem was that the partners and creditors pressed for an extremely harsh and frontloaded austerity program, when adjustment should have been spread over a more extensive time period to moderate its recessionary impact. To a certain extent this was the inevitable result of Greece’s third deficit, the credibility deficit.

The more appropriate response would have been: (a) more growth-friendly fiscal consolidation targets; (b) a more frontloaded emphasis on structural reforms, with technical assistance in implementing them (e.g. in going after tax havens abroad); the Greek governments of the last 3 years bear significant responsibility for dragging their feet on some of these reforms; (c) most importantly, a set of EU offsetting measures, of a countercyclical nature (investment funding, SME finance, employment support, etc) targeted urgently to Greece and the other peripherals facing Great Depression-like levels of unemployment. These should have aimed at moderating the recessionary impact of adjustment, at a time when no countercyclical measures were possible at a national level. Growth cannot be attained and sustained without macroeconomic stability and structural reforms; but recovery in the South will be postponed indefinitely if the Eurozone does not begin acting more like a single economy: reducing fragmentation and country-risk for the peripherals, implementing a more symmetric distribution of the adjustment cost, and moving faster to banking and fiscal integration.

Europe shares a currency but is socially, culturally and politically heterogeneous. On account of the crisis some even speak about a growing and perhaps irreparable rift between the European north and south. Do you think the crisis will exacerbate these divisions or rather strengthen European solidarity?

Crises in the past have often served as opportunities for accelerated integration. I am very concerned as to the political will, on the part of both core and peripheral Eurozone member-states, to make this grand leap forward. Instead of bringing European peoples closer together, this crisis has widened the rifts and revived national stereotypes we thought Europe had managed to bury behind. I hope this is not irreversible. There is a strengthening of a feeling of solidarity among peoples, and there are some European leaders with a strong understanding that we can only exit this crisis if we (Europeans) move forward together in greater unity. But there is also a re-emergence of populists, bigots and demagogues, and even an awakening of nationalisms. And economic crises tend to make societies more nationally introvert. It is still too early to tell which tendency will carry the day.

How would you assess the effects of the crisis in Greece in comparison to those in Spain, Italy or Portugal? Does the crisis put a strain on democratic institutions and how should extremism be dealt with?

The socioeconomic effects of the crisis have been more pronounced in Greece, if we look both at the depth of the recession (loss of one fourth of the 2008 GDP) and the levels of unemployment, comparable only to those of Spain. However Greece has also been exceptional in one additional way, the appalling rise of a neo-Nazi party of immigrant-beating thugs, Golden Dawn, which is among the ugliest versions of extreme right that any European country has seen over the last few decades. Such extremism must be dealt with through a united stance of the entire socio-political spectrum against it, and also through a systematic and relentless judicial prosecution of its wide range of illegal activities.

Do you see any ground for the development of a common approach to mutual challenges among the countries of the European south?

The countries of the European south have completed the largest part of the huge adjustment effort undertaken since 2010, which is evident in the figures. Greece for example has reduced its structural budget deficit by almost 17 percentage points of GDP (from a structural budget deficit of 14.8% in 2009 to a surplus of 2% in 2013 –European Commission, Spring 2013), having now one of the best structural budget balance positions in the Eurozone. Similar is the progress in terms of reducing unit labour costs in Greece and other peripherals. Such scope of extremely painful adjustment enhances political bargaining power. It allows the countries of the Euro South to coordinate their action in demanding a more symmetric Eurozone response to the crisis (an investment stimulus and employment support to the South, combined with a demand stimulus to the North) and faster steps towards real banking, fiscal and eventually economic integration in the Eurozone. The crisis requires national-level fiscal responsibility, adjustment, and reforms in the South, together with greater solidarity, burden-sharing and integration across the Eurozone.

George Pagoulatos is Professor of European Politics and Economy at the Department of International & European Economic Studies, Athens University of Economics & Business