‘Two Croatias’ at the finish line, not one of them a winner

It’s no surprise to many that an economic crisis almost always bears the same unwanted children and Croatia, soon to be the 28th member of the European Union, is no exception. Xenophobia, prejudice, scape-goat mentality, nationalism, conservatism and other forms of collective grouping based on hate and intolerance towards ‘others’, seem to find their way into a popular discourse when economic volatility translates to unemployment, lower wages, job insecurity and an overall decrease in living standards and purchasing power. Croatia’s big celebration on July 1st, when it officially joins the EU, will therefore be an ambiguous, even an ironic affair. On the one hand, it will mark the fulfillment of a dream chased by the country’s elites and shared by majority of its citizens since its independence in 1991, while on the other hand, it will come amidst a significant shift to the far-right in the thinking of ‘ordinary citizens’.

The fact that a declared nationalist, right-wing euro-skeptic politician Ruža Tomašić unexpectedly won a seat in the European Parliament in the April elections probably serves best to illustrate the rift between the ‘two Croatias’. The past year, which saw a rise in unemployment to 18,1 percent (April 2013) and a drop in GDP of 2 percent (2012), has facilitated many indicative ‘incidents’ clearly 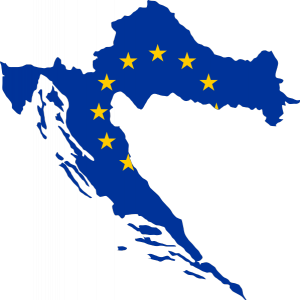 demonstrating an erosion of civic values such as tolerance, human rights and secularism already on shaky ground due to a war fought in the region during the first half of the 1990s in which almost a third of Croatia was occupied. A decline in living standards, (according to a market research agency Gfk, more than half of Croatia’s citizens, 58 percent, found their financial situation worse in 2012, a 10 percent increase from the previous year) seems to have provided fertile ground for the success of two recent conservative civic initiatives, one aimed against the gay population and the other against a new high school subject called Health education, encompassing, amongst other things, an open approach to sexuality.

The Catholic Church (86,28% of the population in Croatia declare themselves Catholic) spoke out openly against the Ministry of education’s implementation of this subject and employed a ferocious media campaign calling for an abolishment of a high school subject intended to educate students in basic human sexuality. A non-governmental organization Grozd, led by dissenting parents claimed that the parents hadn’t been consulted on the matter and that the subject matter involved pornography, destruction of traditional family values and stimulated homosexuality and masturbation. After a complaint was lodged at the Constitutional Court, the court found in May the addition to the curriculum unconstitutional and demanded it be abolished.

An initiative that followed, again led by a civic association called U ime obitelji (In the name of the family) started collecting signatures for a referenda to constitutionally define marriage as a community of man and woman, therefore preventing LGBT persons to marry any time in the future. Worth noting is that no such counter-initiative, to legalize homosexual marriages, existed in Croatia, which makes such a zealous appeal all the more curious. The number of collected signatures astounded many in Croatia, having surpassed 700 hundred thousand in a country of 4,4 million people, thus clearly indicating a strong shift to conservative values in the minds of many.

Meanwhile, local elections held in May unexpectedly resulted in a very good performance of HDZ (conservative Croatian Democratic Party) in spite of its president Tomislav Karamarko topping the most unpopular politicians list for months and the party being mired in corruption scandals since the arrest of its former president and Croatian prime minister Ivo Sanader in 2010. HDZ won 59,6 percent of the votes for the county assemblies (Županijska skupština), and even though the ruling social-democrats (SDP) won three out of the four biggest cities in the run for mayors, the result nonetheless demonstrated a substantial support to sometimes highly inflammatory rhetoric of HDZ which often relied on the fear of a communist revival and the destruction of traditional Croatian values.

A professor at the Faculty of philosophy in Zagreb Ognjen Čaldarović agrees that the crisis effects perception and provides an opportunity for the rise of extremism and intolerance. ‘Every crisis causes a shift in perception, but also in the real impression of the society, the problems and the distribution of social fairness with respect to the effects of the crisis – does everyone share the same burden?’ A prominent politician and the leader of the Labor party, the third political power in Croatia, points to the existential fear that leads ‘to the heard, where it smells bad, but it’s warm’. Shifting blame to the minorities in the society, which ever they may be, is a trademark of a crisis nearing its peak, explains Dragutin Lesar. ‘Relevant ideas have a hard way of finding its way within the public rhetoric in such a situation’. Lesar notes that there are similarities between what is happening in Croatia and what became a symbol of any such social decay, the Weimar Republic in the 1930s. ‘All the main indicators are present – unbelievable social differences, economic societal set-back, an indecisive mainstream left and the so-called centrist right, the inability to recognize the dangers of extremist messages, the disappearance or almost disappearance of socially aware intelligentsia, media controlled by interest groups, apathy of the broad social classes waiting to be ignited etc’.

While this rhetoric is not exclusive to Croatia, it finds support more easily as a result of the recent war, a ruined economy and a troubled transition from socialism to capitalism. Both Čaldarović and Lesar feel that Croatia is not much different than the other European countries, but add that it does provide certain specificities as a result of a rouge privatization process that left bigger differences between classes. Such a situation could lead many citizens to seek a strong leader figure and to unite towards common enemies in our midst. On the other hand, Darko Polšek, also a professor at the Faculty of Philosophy in Zagreb, warns of ‘calling out the devil’ although he agrees similarities to Germany before the rise of Hitler do exist. If one feels such a comparison is far-fetched, a quick look around Europe in which far right movements are gaining force from the Golden Dawn in Greece to True Finns in Finland might persuade him otherwise. Democracy is, as history has shown numerous times, a very fragile creature prone to crack under economic hardship more quickly than many like to think.

All three interlocutors agree, albeit reluctantly, that Croatia’s accession to the EU may alleviate some of the extremist rhetoric. However, skepticism remains as to the extent of the benefits stemming from the influence of the EU on Croatia. While, as mentioned in this article, the rise of right-wing rhetoric in the public discourse is not exclusive to Croatia, it does seem to find a very captivated audience. Also, conservatism and intolerance have managed to appeal to a significant portion of the population, as opposed to other countries where it is still relatively limited and wields little palpable power in defining these societies’ everyday life. The 700 hundred thousand signatures to, in fact, ban gay people from marrying and the Constitutional Court’s verdict attest to that vividly.

Vanja Figenwald is Brussels-based journalist who writes for a weekly business magazine Lider from Zagreb, Croatia. Holds a master degree in politics from University of Zagreb, specialises in international economy and European politics.

Kristina Kardum holds an MSc degree in international relations from University of Bristol and a master degree in sociology from University of Zagreb. Former technology and a business journalist working for several print and online editions, currently employed by the European Parliament. Views expressed in this article are her own, and do not in any way express formal positions of the Parliament.

2 Responses to ‘Two Croatias’ at the finish line, not one of them a winner