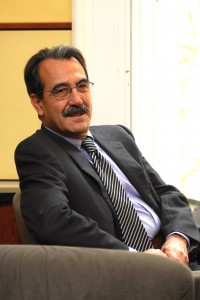 Euro Crisis in the Press has asked the views of influential analysts and commentators throughout Europe on the multifaceted crisis facing the European Union. In today’s interview, Emilio Ontiveros Baeza, Economics Professor and President of ‘Analistas Financieros Internacionales’ (AFI), argues that the very idea of Europe is being questioned and that the adverse results of extreme austerity policies will help to change this policy in order to improve economic growth and employment opportunities. Finally, he reminds us that Europe needs long term policies and that those who have been hit the worst by the Euro Crisis are not those who originated it.

Q – Professor Ontiveros, there is little doubt that Europe is undergoing an unprecedented crisis. The crisis itself can be seen as having multiple dimensions. From your point of view, what is the most important aspect of the crisis?

A -The paradox is that a crisis that did not originate in Europe is having its most costly consequences on this region. First, in real terms, reflected in a prolonged recession, very high unemployment and business mortality. Second, in financial terms, with a severe banking crisis, financial fragmentation and high tensions in the government bond markets of some countries. And a third effect, equally important, this is an unprecedented institutional crisis, which has led many people to question the very integrity of the euro and to a dramatic decrease in confidence in the European institutions.

Perhaps the most difficult effects to assess at this moment are those that affect the institutions. In particular the Euro Crisis is weakening the confidence in European integration as the main foundation of welfare for the majority of citizens. The very idea of ​​European Union is being questioned.

Q – What would you identify as the main causes of the crisis and what are the potential policy responses that you think would be most effective?

A – The origin of the crisis has to do with very serious problems in the bad risk management by the financial institutions in US and Europe, and with a not very effective financial supervision in both sides of Atlantic. We know that since the breakdown of Bretton Woods system most financial crises are no longer local.

After the emergence of the crisis, the policy reactions were quite different in American and EU economies. In the US the expansion in the monetary and fiscal policies was the response. In the Eurozone, the austerity was imposed and the monetary policy was more timid. The results are very well known. The US economy is growing, but the Eurozone is in recession.

In the short term, Europe needs long term policies that must be clearly oriented to increase the aggregate demand and, secondly, to improve the European Monetary Union with a Banking Union and a Fiscal Union. Both sets of decisions are necessary conditions to overcome the three main consequences of the crisis mentioned earlier.

Q – Europe shares a currency but is socially, culturally and politically heterogeneous. On account of the crisis some even speak about a growing and perhaps irreparable rift between the European north and south. Do you think the crisis will exacerbate these divisions or rather strengthen European solidarity?

A – It is a fact that the management of the Eurozone crisis has generated a very deep division between countries. The most affected, those considered peripheral, suffer from pro-cyclical policies very concentrated in time.

On the other hand, some countries of central and northern Europe have benefited from excessive aversion to risk, and have been able to fund their public debt to historically low interest rates. The available empirical evidence, including that recently provided by Professor Paul de Grauwe, demonstrates the inappropriateness of the policies practiced: the economies that have tried to implement extreme austerity decisions are those that now are growing less and have reduced their public debt to a lesser extent. Welfare indicators are deteriorating more rapidly in these economies. Without growth, it is not easy to improve public and private finances.

If the institutions continue to impose extreme austerity policies, risk division will remain high. There is a perception that Europe today is more unequal than ever. I trust that the evidence of very adverse results in peripheral countries will help to change this policy in order to improve economic growth and employment opportunities. This would be the best form of solidarity and commitment to the future of the EU.

Q – How would you assess the effects of the crisis in Spain? Are they comparable to those in Greece, Italy or Portugal?

A – In real terms, the impact is less dramatic than in Greece and Portugal, but more severe than in Italy, especially in the size and composition of unemployment. Currently Spain has an unemployment rate of around 27% ( more than half of its young people are unemployed) and a very important structural unemployment.

The collapse of the residential construction sector has been especially severe in Spain. Its significance was bigger than in other economies: more than 12% of the GDP and employment in the five years before the crisis.  This sector was also the main source of the high private debt to the banking system.

The high debt of households and firms and the difficulties of the banking system to resume the supply of credit, are also distinctive features of the Spanish economy that do not favour precisely the recovery of private investment and consumption.

Additional difficulties come from the currently very high external debt. One significant difference is that at the beginning of the crisis, the Spanish economy had a fiscal surplus and a ratio of public debt to GDP that was one of the lowest in Europe. However, the Spanish government had to apply the same therapies imposing budget austerity that those economies with high public debt.

Q – Are there any further important dimensions of the crisis which you think have been missed or under-analysed?

A- I would insist that now this crisis is also a crisis of the idea of Europe as a project that should ensure the wellbeing and cohesion of citizens. Inequality in the distribution of income and wealth is growing, both within the ‘peripheral’ economies which have suffered the crisis the most, as well as between these countries and those of central and northern Europe which have coped relatively better with the crisis.

I think that it is absolutely necessary to recover the confidence in the European institutions.  And that means changing to other macroeconomic policies aimed at reducing unemployment and the protection of the most affected by the crisis. They are not, we should remember, to blame for originating the crisis.

Thanks very much for your contribution.