The roots of right-wing populism in Central and Eastern Europe: at the nexus of neoliberalism and the global culture wars

In their recent article in The Guardian, based on the forthcoming book The Light that Failed: The Reckoning Ivan Krastev and Steven Holmes claim that the current illiberal backlash in countries such as Poland and Hungary is best explained by the post-transformational fatigue rooted in unsuccessful efforts to emulate the West after 1989. While this tendency “has been given an assortment of names – Americanisation, Europeanisation, democratisation, liberalisation, enlargement, integration, harmonisation, globalisation and so forth – … it has always signified modernisation by imitation and integration by assimilation” resulting in resentment, anger and resistance harnessed largely by the right-wing populists. They pronounce that the “god of liberalism” died in Eastern Europe, mostly due to the unfulfilled promises of western liberalism to transform post-communist countries by helping them to catch-up with the West. This explanation fits well into narratives of fragile democracy in post-communist countries, but is it true? Today’s populist leaders in the region are certainly eager to present democratization as a form of cultural colonization, and call for regaining sovereignty – in politics, economy and culture – in order to mobilize the electorate, but is this the key to their electoral successes?

Clearly, the tensions between what was promised in 1989 and what was delivered two decades after were one of the factors that facilitated the victories of right-wing populist parties in the region, but the connection between the two is neither straightforward nor is disillusionment with democracy unique to the post-communist context. I disagree with the vision presented by Krastev and Holmes on three levels. The first problem is that they uncritically follow the populists in collapsing the difference between liberal democracy and neoliberalism. Secondly, they ignore the role of transnational ultraconservative networks and discourses in promulgating a vision of the West in need of being saved by the East. Thirdly, they view the illiberal tendencies in effect as an Eastern European peculiarity, rather than a transnational trend, present also in most Western countries. 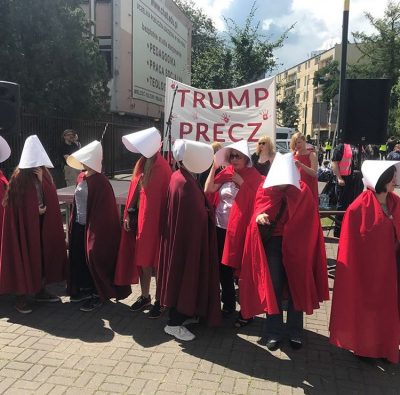 The authors tend to conflate liberalism as an ideology and practice based on liberty, freedom and equality before the law with neoliberalism as both an economic regime and value system promoting rampant individualism, small state and the decay of social citizenship. While the definition of liberalism is highly contested we can safely assume that what most Poles hoped for in 1989 was a system akin to Swedish welfare state in the 1970’s which combined individual freedoms with economic opportunities. What they got, however, was closer to the American model in the 1980’s, characterized by a propensity for nurturing inequalities and proudly announcing that from now on it is “every man for himself”. Analogously to Janos Kis who said that “What we wanted was civil society, and what we got were non-governmental organizations”, we can conclude that what Eastern Europeans wanted was liberal democracy and what they got is neoliberal governance.

This is mainly because Eastern Europeans entered a West that was already profoundly transformed by its own home-grown populists such as Margaret Thatcher, who promoted TINA ideology religiously and with great success. Even in countries such as Sweden the welfare state was crumbling: the late 1980 and early 1990’s in the country were marked by the implementation of new public management reforms, which led to the privatization of housing stock, cuts in the social support system and the introduction of the market logic in state-citizen relations. In other words, what many eastern Europeans are really tired of is not liberalism, but rather its evil twin – neoliberalism – which brought precarious working and living conditions, dismantled state-supported security nets and made productivity the new god. Poles do not despise the West en masse, in fact under the Law and Justice rule support for the EU membership is by far the strongest among the European countries: 97% in March 2019.

The type of anti-colonial Euro-skepticism that is openly expressed by many right-wing politicians does not spread easily. Just to the contrary, Poles believe in the project of European integration more strongly than their German neighbors, not to mention the British. They are also more satisfied with democracy than the EU average: a Pew research poll conducted in spring 2019 shows that 66% of Poles are satisfied with the way democracy is working in their country, while the EU average is only 39%. This data is consistent with research showing that the new Law and Justice supporters (those who voted for the party for the first time in 2015 assuring its victory) are attracted mainly by the promise of economic gains such as cash transfers for families with children called the 500+ program . While they tend to be more conservative than the average Pole, they are not expressing any “resentment at liberal democracy’s canonical status” and do not seem to be enraged by “the politics of imitation”.They simply desire cash and a sense of dignity.

Moreover, Krastev and Holmes seem unaware of the fact that the vision of Poland or Hungary as a model for the West did not necessarily originate in Warsaw or Budapest, but is also very present in the minds of Western ultraconservative intellectuals and activists, who exported their view of the West as corrupted by sexual revolution and liberalism globally. Just like the “promoters of democracy” who pumped ideas and money into the region’s fragile civil society, global opponents of gender equality, minority rights and “the corrupt liberal elites”, created outposts in countries such as Russia, Poland or Ukraine hoping for more political opportunities in post-transitional contexts. In the words of Gabriele Kuby, German sociologist and ultraconservative pundit:

A new totalitarianism is developing under the cloak of freedom (…) now the East European countries are becoming aware of this trend, and my book seems to be helping awaken people. The destruction has not gone as far here and people are motivated to resist it. My great hope is that these East European countries will become a stronghold of resistance in the European Union.

The anti-colonial frame used by Orbán or Kaczyński is neither new, nor specific to post-transformational Eastern Europe. Rather, it is a rhetorical devise uced readily by right-wing populists and ultraconservatives in many different contexts to oppose the UN, EU, WHO and individuals such as George Soros and Bill Gates, branded as new colonizers. As Agnieszka Graff and I have shown, this frame facilitates the affinity between right-wing populists and nationalists in various locations, because it validates the local, the authentic and the sovereign, no matter in which country or continent – it is always the local culture, tradition and family that is under threat and in need of protection: “Anti-colonialism is a populist meta-discourse that trumps local particularisms and geopolitical conflicts; it presents itself as an effort to defend ordinary people, the poor, the helpless, the abused against a network of corrupt global elites.” Thus, the emergence of anti-colonial discourses in countries such as Poland or Hungary should be seen not only as a reaction to the forced catch-up narrative, but as emanation of a decades-long efforts of ultraconservative actors to present equality, individual freedoms and minority rights as liberal imposition and violence.

This brings us to the third and final problem with Krastev and Holmes’ conclusions: they take the well-travelled road of highlighting the specificity of the post-communist context, while they marginalize the importance of transnational tendencies and connections. At a time when right-wing populists are not only on the rise in Western Europe, including France, Germany and Sweden, but are presidents of countries that are global powers, such as the US and Brazil, dismissing transnational connections and trends is nothing short of delusional. In order to understand the success of the Law and Justice party or Fidesz we need to account for the growing opposition to neoliberal regimes and disenchantment with the ways liberalism was put into practice in the West, as well as the mobilization of illiberal civil society worldwide. The best example of how deeply this illiberal mobilization is embedded in politics is the World Congress of Family organized in the “city of love” – Verona – in March 2019. While the main organizer is American citizen Brian Brown, among WCF’s Italian supporters and “stars” of the event were the then vice-Prime Minister Matteo Salvini flanked by several ministers representing Lega, the representatives of ultraconservative NGOs from various countries (including the native of Spain Antonio Arsuaga, the founder of CitizenGo, a transnational platform with over 10.000.000 users and HazteOir, which is closely connected to ultra-nationalist party Vox) as well as state officials representing Hungary and Brazil, along with the Catholic bishop of Verona Giuseppe Zenti, representative of the Russian Orthodox Church Archbishop Antony (the then Archbishop of Vienna and Budapest), and Jim Garlow, a well-known leader of American evangelicals. The official goal of the meeting was to “defend family and children” but the political ramifications were obvious, especially since previous meetings took place in Budapest (2017) and Chisinau (2018). Both Viktor Orbán and Igor Dodon visited the Congress and gave their blessing to the organizers’ efforts to globalize the ultraconservative agenda. WTC is just one example of the ways in which a global cultural war intersects with the rise of illiberal tendencies and right-wing populist parties. Believing that this trend is just a regional peculiarity propelled by post-transformational fatigue and the failures of western-sponsored democratization in countries where democracy was always fragile and “alien” is reassuring, but such a view blinds us to sobering reality: the ways in which skepticism towards liberalism influenced mainstream politics in Hungary or Poland may be paradigmatic rather than parochial.

Elżbieta Korolczuk is a sociologist, working at Södertörn University in Stockholm and American Studies Center, Warsaw University. Her research focuses on social movements, civil society and gender.  You can find more of her research on her ResearchGate profile.

3 Responses to The roots of right-wing populism in Central and Eastern Europe: at the nexus of neoliberalism and the global culture wars