Four graphs about Catalonia and citizens’ attitudes towards the EU

Posted on November 17, 2017 by Eurocrisis in the Press

“Is this the Europe that you invite us to build, with a government in prison? How long are you, Europe, going to look away from this coup, from the abuse of our colleagues, who are elected representatives, in prison?” This is how Carles Puigdemont, former president of Catalonia, addressed Presidents Juncker and Tajani on Twitter, openly complaining about the position that the EU has taken on the Catalan crisis.

The (lack of) support coming from the EU has been a key component in framing the political positions of both independentists and unionists during the events of the last months in Catalonia. For the Spanish government, EU support has been fundamental in legitimizing its actions. On the secessionist side, efforts have been made to generate favourable involvement of EU institutions, with demands ranging from mediation requests to the active involvement of the EU to protect fundamental rights. The clearest example of this pattern is the move of the former Catalan government to Brussels with the aim of internationalizing the situation from the European capital.

Nevertheless, and in spite of the continuous demands coming from the independentists, the EU has firmly backed the Spanish government, not showing any of support to the secessionist cause. In such context, we could ask ourselves whether this situation is affecting the attitudes of Catalan citizens on the EU. In other words: could this lack of European support undermine citizens’ perceptions of the EU? In this article, I will try to find a preliminary answer to this question, by analysing survey data coming from the last Public Opinion Barometer from the Catalan Opinion Studies Centre (CEO).

The situation in Catalonia and citizens trust in the EU

One approach is to analyse the evolution of Catalan citizens’ trust in the EU, breaking it down by citizens’ territorial preferences. This is shown in the following graph: 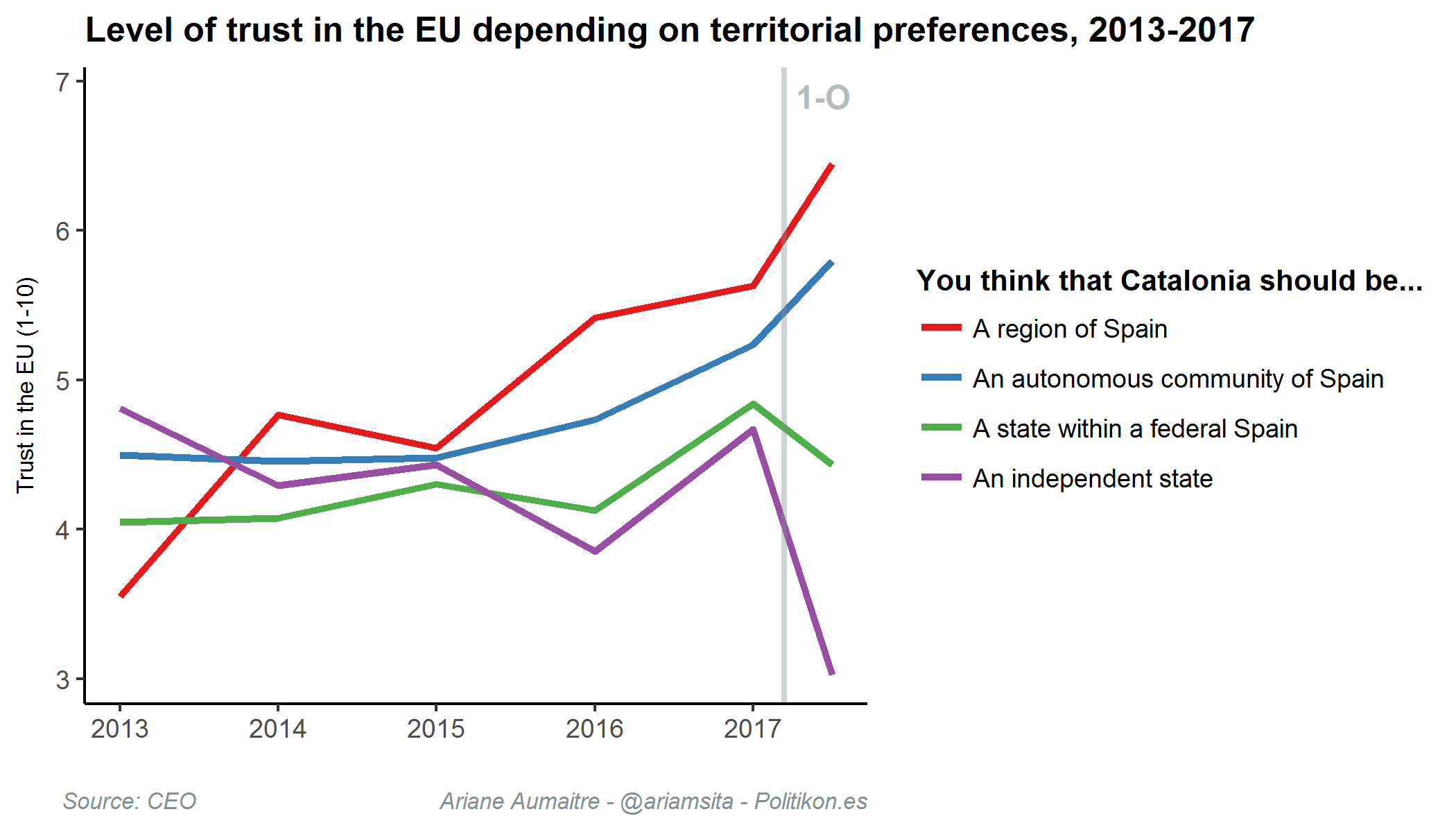 The first years of the series do not show a clear pattern in the relationship between trust and territorial preferences. In 2015, all groups show a similar level of trust, but the lines start to diverge from each other in 2016, a tendency that is accentuated in 2017. The 1st of October events, located between the two 2017 surveys (the first one from July and the second one from late October) appear to show an important gap in trust opening up among the independentists.

The trend shown in the chart suggests that the response coming from the EU has significantly affected all population groups. On the one hand, trust in the EU strongly increases among those who believe that Catalonia should be part of Spain, something that is probably triggered by the perception of the EU backing their position. On the other hand, independentists go through a reverse process, where the lack of EU support for their aspirations may be driving the decline in trust shown in the data.

Recent events and the feeling of attachment to the EU

It is broadly argued that Catalan nationalism has traditionally been a pro-Europe movement, whose demand of independence included the idea of Catalonia as a new EU state. For this reason, it is interesting to look not only at data on trust, but also on feelings of attachment towards the EU. This question appears in CEO surveys only in 2016 and 2017, something that limits the analysis of the evolution, but nevertheless allows us to gain a better understand of how the recent events influenced attitudes. The two following graphs show the trend of feelings towards the EU for the last year in relation to (1) territorial preferences and (2) territorial identity among Catalans. 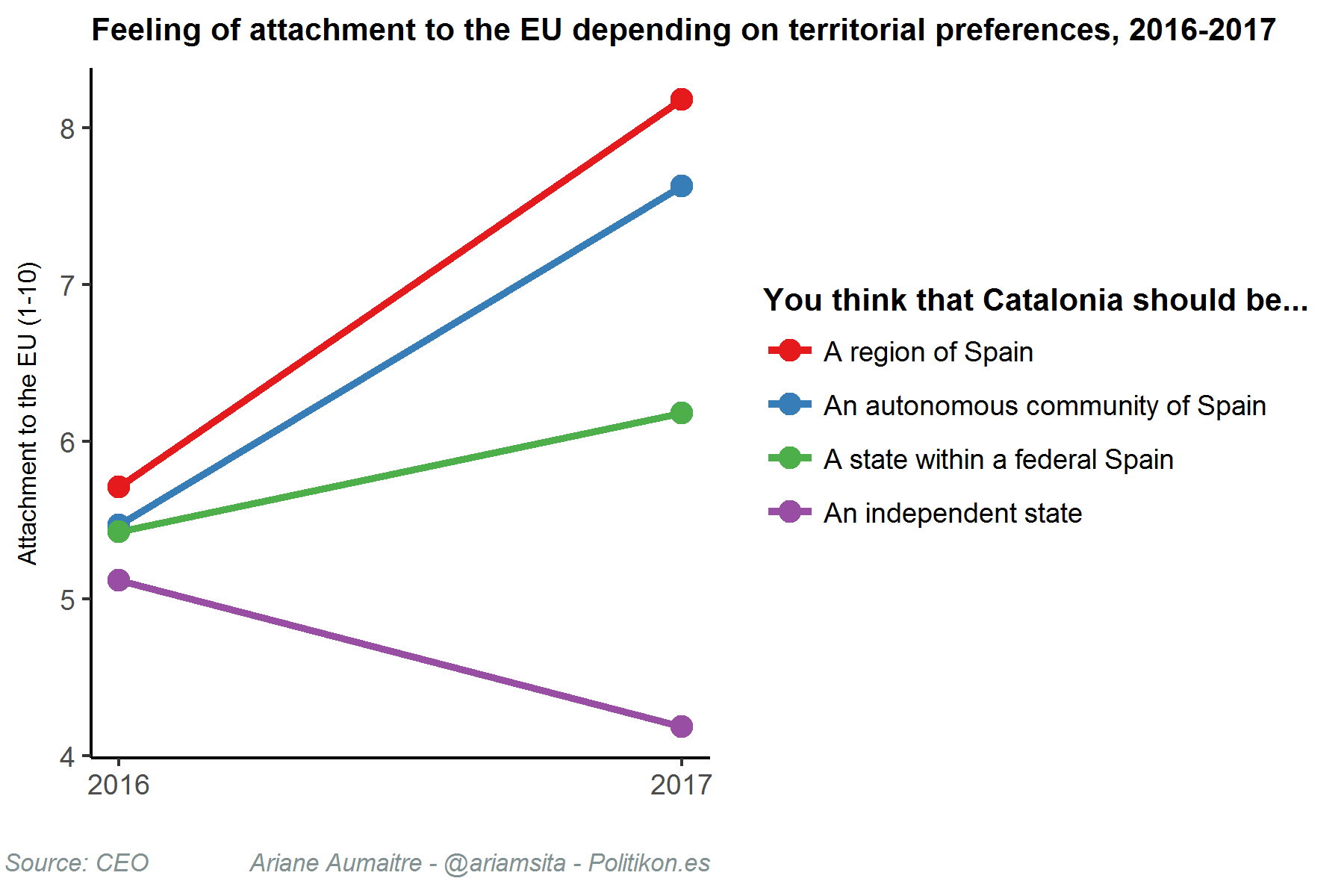 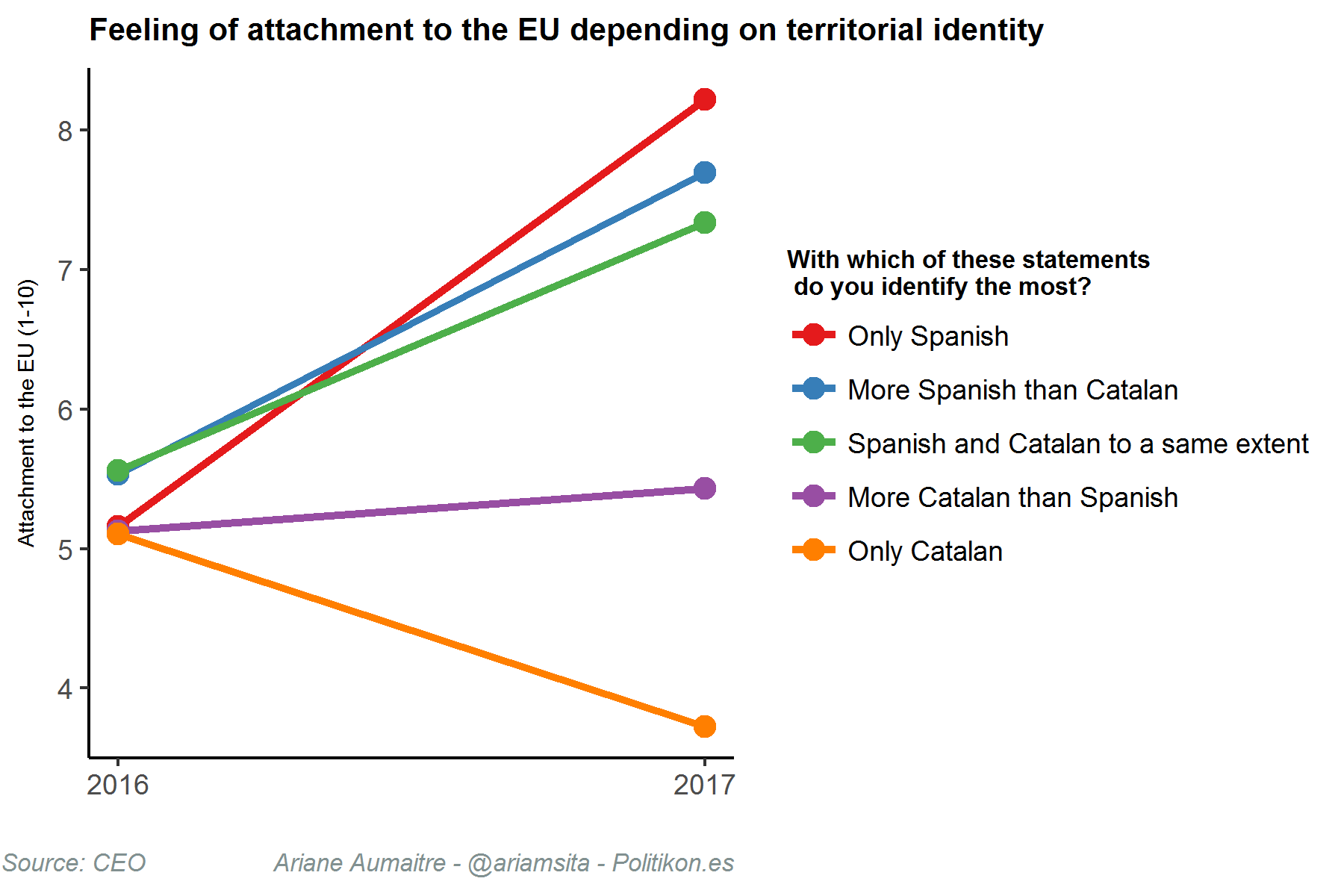 The data are in line with the results presented in the trust subsection. The graphs show a clear decrease in feeling of attachment to the EU among those who want an independent Catalonia, as well as among those who feel only Catalan. On the other hand, those who believe that Catalonia should remain a part of Spain now feel more attached to the EU, the same as citizens who feel Spanish.

These trends seem especially interesting considering that in both cases the starting point is very similar for all groups, with only one point difference at the outset. However, after 1st of October, the differences in feeling of attachment among groups rise to more than four points.

The last graph of the analysis addresses the political dimension of the phenomenon, by analysing the evolution on the feeling of attachment in relation to voting intentions: 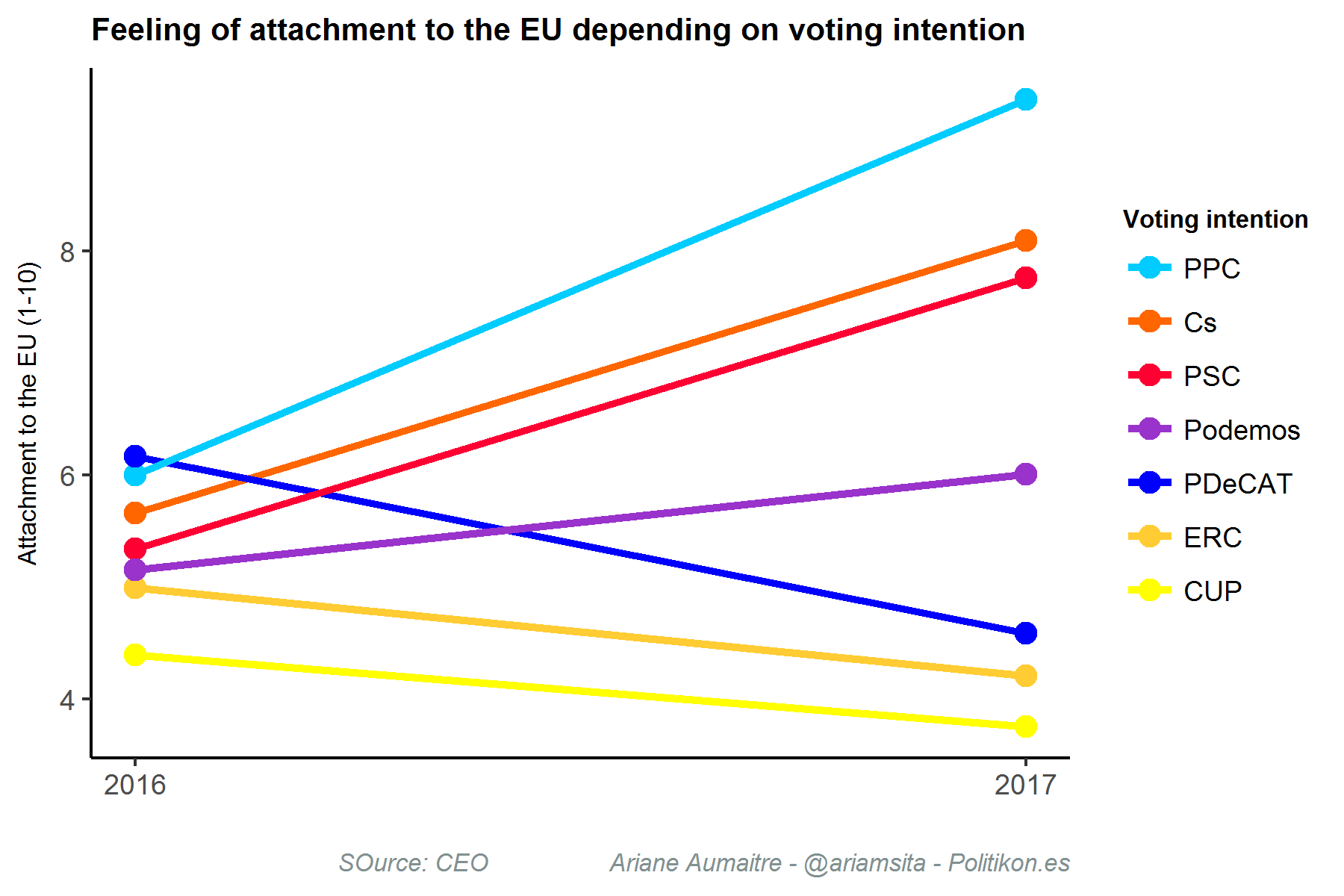 Once again, we see a similar divergence. The starting point varies little among voting groups, with the exception of CUP voters (which is not surprising, the CUP being a leftist antisystem party), while the difference after the 1st of October is almost 5 points. The voters of constitutionalist parties feel more attached to the EU now than they did a year ago, while secessionists feel less attached. The most striking case is that of PDeCAT voters, who were the most attached to the EU in 2016, and whose decrease in attachment is the most pronounced.

A possible explanation for changing attitudes

How can we explain this drastic change in the attitudes of Catalan citizens towards the EU? The most obvious reason has already been mentioned throughout the article: while “unionists” felt backed by the EU during the last months/weeks, it makes sense to think that independentists felt frustrated because of the lack of support coming from Brussels.

A complementary interpretation could build on Sanchez Cuenca’s explanation of the support of European integration. This is based on the idea that citizens tend to be more supportive of integration when they hold negative opinions of their national leaders in comparison to European ones. Following this line, we could say that Catalan nationalists supported the EU because they perceived the quality of the policies made in Brussels to be somehow superior to those made in Madrid. But this mechanism would break down at the moment when Brussels policies are no longer perceived as distinctly better than those coming out of Madrid.

In the end, what the data seem to point to, is a story of frustrated expectations, in which pro-independence citizens expected a supportive reaction from the EU that never materialized. This is not surprising, however, since the EU has no competences in national territorial issues, and member states have no interest on supporting secessionist movements.

Uncertainty remains concerning whether this change in attitudes will translate into a change in the political discourse around the elections on 21st of December. On the one hand, the presence of the former members of the Catalan government in Brussels suggests that they may still hope to achieve some kind of international support. On the other hand, statements such as the one at the beginning of this post could be a sign that the independentist movement is willing to move ahead even without the European flag. In a context of raising Euroscepticism and nationalist tensions, this does not appear to be good news for anyone.

This piece was originally published on the Politikon blog.

Ariane Aumaitre is academic assistant at the College of Europe in Bruges. She holds a MA in European Public Policy Analysis from the College of Europe. Her research interests are focused on the political economy of European integration, and especially on the impact of economic integration on national policies. She’s also interested in the intersection between female labour market participation, the sustainability of welfare states and equality of opportunities in post-industrial societies.

An Explanation of the Current Political Situation in Catalonia

This entry was posted in Europe, European elections, Nationalism, Spain and tagged Catalan Independence, Catalonia, Nationalism, Public Opinion, Spain. Bookmark the permalink.
We use cookies on this site to understand how you use our content, and to give you the best browsing experience. To accept cookies, click continue. To find out more about cookies and change your preferences, visit our Cookie Policy.