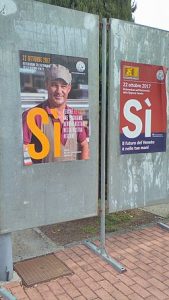 In Italy one can often hear the argument that Italians do not really have a single homeland. They are Italians when they encounter people of other nationalities, but otherwise their feelings of belonging rest with a particular region, and each region  is perceived as in constant competition with the others. Most importantly, it appears to many that Italians feel “citizens” of their own city or village. If someone asks an Italian where he or she comes from, usually the first answer is the name of a town. Italy can still be considered a young democracy, after all. Now a new form of nationalism – originating in a critical stance against the EU, globalisation, and mass migrations – is merging with its traditional face. In the language of Dante, it is campanilismo (from campanile, bell tower), and shares some negative aspects of parochialism. This means an attitude favouring local conveniences over general interests, and it is not just about cultural differences. Almost all Italian regions and cities have an often conflicting relationship with the state. Those in the South because they need more economic solidarity, those in the North because they feel they are exploited to finance the rest of the country. As a consequence even the main national parties have conflicting territorial interests and strategies.

Despite growing patriotism in Italian politics, on the 22th of October the regions of Lombardy and Veneto are going to hold two referenda to demand greater autonomy from Rome. This is the first time this has happened. However, these are not binding referenda. For this reason, they attracted little attention from the media and the rest of Italy. But the recent Catalan crisis has changed everything. The Italian referenda are very different from the one held in Catalonia. Lombardy and Veneto, which represent the richest area of the country, are not pursuing an independentist goal. Instead, their local governments are asking citizens for a strong mandate to open negotiations with the national government in order to extract the most exclusive powers. This is a possibility already envisaged by the constitution, therefore it does not undermine institutional stability from a strictly legal perspective. Nevertheless, the Catalan crisis has increased the focus on the referenda and forced all political parties to take a stand.

Roberto Maroni and Luca Zaia, the two governors who have called the vote, supported by centre-right allies and Five Star Movement as well, come from the Northern League party, which used to rally under the banner of independence for Northern Italy from its inception in the 1980s until in the mid-1990s. Just twenty years ago, its former leader Umberto Bossi summoned his supporters to “vote” for an informal consultation. Nothing more than a survey. That was in 1997. Three years later, Mr Bossi signed a new alliance with Silvio Berlusconi’s Forza Italia, abandoning the dream of an independent State called “Padania” in exchange for a return to government positions. The Northern League is now driven by Matteo Salvini, a younger populist leader who has been betting on a nation-wide project. Mr Salvini strives to become the next prime minister through a law and order programme. He is convinced that all regions can live together on the condition that they shall be autonomous both from Rome and EU institutions. He is therefore promising referenda from North to South.

For all these reasons, nobody in the Northern League wants today to be confused with the independentist ideological underpinnings of the Catalan crisis. Its leadership fears that voters may become afraid of severe consequences out of the planned referenda. This means that there is no more space for any “Padania” project. “Our referenda are legal and within the national unity established by the constitution”, Lombardy and Veneto governors keep remarking. “A democratic state must not use violence against citizens, but we have chosen a different path from that of Catalonia, we are respectful of the law”, their leader Salvini added after the clashes between Barcelona and Madrid. It should also be said that Northern Italy’s political requests are more about financial resources than identity, and that the two consultations do not have any popular support in the streets. Nevertheless, the case of Catalonia has served to bring out the contradictions of the Northern League with its history. Most of League’s officials, indeed, have shown solidarity with the Catalan independentists, even if they are pursuing a different agenda. Other centre-right parties have instead condemned the outbursts of violence which occurred in Catalonia while defending, however, the right of intervention of the Spanish Government. Consequently, the far-right party Fratelli d’Italia accuses the Northern League ally of weakening patriotic sentiment, while Berlusconi is trying not to annoy both his northern and southern supporters. ”We have nothing to do with the dramatic news from Catalonia”, the former PM stated.

No one in Italy seriously considers that the two referenda may have the same revolutionary effect as the one in Catalonia. The centre-left Democratic Party currently controlling the national government has asked for dialogue between Madrid and Barcelona and for the exclusion of any violence, and is simply trying to boycott the vote, together with the far-left political forces. They consider the referenda in Northern Italy as a pure propaganda operation. Even the Five Star Movements, which is campaigning for a ‘Yes’ vote, has been accusing the Northern League of ambiguity. But the debate about the Catalan case is indicative of the state of uncertainty of the Italian politics, when general elections are due within six months. What is going to happen in Lombardy and Veneto should not be underestimated.

The two governors intend to transform their current powers, based on a principle of subsidiarity, into exclusive regional powers (particularly concerning public education and mobility, for instance). However they are also pondering the possibility of demanding more tax and police powers from the central government, even though this is not included in the referendum question (and would require a constitutional reform). As there is no survey indicating a victory of ‘No’, the turnout will be decisive. The fewer people vote, the weaker will be the future demand for autonomy. In this case, the debate will likely end soon. But if the mandate to negotiate with the national government turns out to be strong enough, it is predictable that other Italian regions will seek greater powers. It may start a race between local institutions and national government. And it is not known what might happen at that point.

Alessandro Franzi is a Milan-based journalist who works for Italian news agency Ansa. He writes about politics with particular interest in the Northern League and center-right parties. He holds a bachelor degree in History and he is MA Science Political candidate at University of Milan with a thesis on Eurosceptic movements.

An Explanation of the Current Political Situation in Catalonia

This entry was posted in Italy, Spain and tagged Catalan Independence, Catalan referendum, Catalonia, Lombardy referendum, Northern League, Veneto referendum. Bookmark the permalink.
We use cookies on this site to understand how you use our content, and to give you the best browsing experience. To accept cookies, click continue. To find out more about cookies and change your preferences, visit our Cookie Policy.