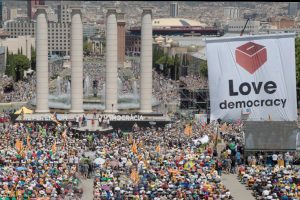 On 9 June 2017, the Catalan government announced a self-determination referendum to be held on 1 October 2017. Two days later, next to a big banner with the slogan ‘Love Democracy’ and in front of 40,000 people, Manchester City’s manager Josep Guardiola read the official pro-independence manifesto urging the international community to defend

‘the rights that are under threat today in Catalonia, such as freedom of political expression and the right to vote. To face up the abuses of an authoritarian state.’

The hyperbolic message, the unusual speaker and the choice of the dates for the announcements, coinciding with the aftermath of the UK election and the first round of French legislative elections, demonstrate the weakness and sense of urgency of the pro-independence camp. They have realised that the window of opportunity for the independence of Catalonia is closing. Since July 2016 the percentage of Catalans against independence has steadily grown (48.5% vs 44.3% in favour), popular mobilisation is decreasing, corruption scandals linked to the previous nationalist government continue to emerge, the Spanish economy is starting to improve, and they have failed in all their attempts to gain the endorsement of any relevant international actor. 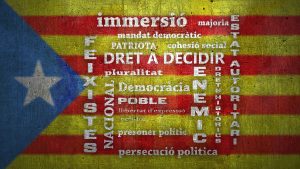 Although the Spanish governments have lacked the ability and the goodwill to address some of the legitimate claims coming from Catalonia, the reaction from the nationalist camp has been largely disproportionate. The traditional negotiation vocation and long-term pragmatic approach of Catalan nationalists, which helped them obtain great levels of autonomy for Catalonia, has been now completely replaced by a maximalist and confrontational strategy with a very strong populist component. The pro-independence camp has adopted a reductionist discourse establishing ideational boundaries and a moral hierarchy between two supposedly homogenous and antagonistic groups: ‘democratic true Catalans’ versus ‘backward and authoritarian Spaniards’. According to this discourse, the history, culture and language of Catalonia are under constant threat of annihilation. The political goals of Catalan nationalists emerged –they claim- from the ‘will of the Catalan people’ (or almost half of them) and should not be bounded by Spanish laws, which are intrinsically tainted or flawed. Those prosecuted by Spanish courts are political prisoners and victims of an unjust system that was imposed on them. But sooner than later the Catalans will fulfil their destiny and create a separated country. A simple and epic narrative that resonates with the feelings of many but which is largely disconnected from reality.

The Catalan government and the rest of the pro-independence movement, including political parties, government institutions, civil society organisations, media and an important group of academics, have systematically nurtured the idea that Catalonia has been historically abused by Spain and that the only solution is to part ways. This strategy has worked relatively well at a domestic level where the support for independence has grown to unprecedented levels in the history of Catalonia and people have naively embraced the idea that a referendum would settle this issue. The campaign to separate emotionally Catalans from the rest of Spaniards, although intensified in the last few years, can be traced back to 1990, when the former President of Catalonia, Jordi Pujol, initiated its successful strategy for the ‘recatalanisation’ of society. This plan included the utilisation of the education system, cultural entities, public administrations and the media to enhance difference and the ‘nationalistic spirit’ of Catalans.

However, the simplistic victimisation discourse employed today by pro-secession nationalists does not withstand a reality check. Far from being an authoritarian state abusing the rights of Catalans, Spain is one of the most democratic countries in the world and Catalonia one of the most prosperous regions in the country, with a very high degree of autonomy. The ‘right to vote’ is not under threat, as the manifesto claims. On the contrary, since 2010, Catalans have voted in 3 Spanish general elections and 3 Catalan regional elections and many predict a new snap election in Catalonia before the end of 2017. Finally, the fact that Guardiola and the President of the Generalitat, Carles Puigdemont, can overtly accuse Spain of being an authoritarian state while explaining in front of thousands of people a plan that, circumventing legality, aims at the secession of Catalonia precisely proves that freedom of speech is far from being compromised.

The pro-independence camp selectively uses the Scottish and Canadian referendums to justify a similar one in Catalonia. By questioning the democratic credentials of Spain for not allowing the referendum, they are committing a logical fallacy and ignoring the empirical evidence. Firstly, these two cases are rare exceptions since the overwhelming majority of democracies in the world would never allow a referendum of secession for part of their territory. Secondly, the type of unilateral referendum the Catalan government wants to organise on 1 October 2017, does not respect any minimal legal safeguards or procedures and would not be accepted either in the UK or Canada. Thirdly, a referendum is only democratic if it is legal and if those involved are willing to accept its consequences. Would nationalist leaders stop fighting for independence if they lose a hypothetical referendum? Many of them have declared that they will not cease their fight until Catalonia is an independent state.

For the nationalist camp, the referendum mainly serves to give appearance of legality and fairness to their unilateral strategy of faits accomplis. They, long time ago, decided that Catalonia must secede. Without waiting for any referendum result, and having obtained only 47.8% of the votes in the last Catalan elections, the pro-independence parties declared the beginning of the independence process, started creating the institutions that would govern an independent Catalonia (‘estructuras de estado’) and drafted the Ley de Desconexion (‘Disconnection Law’) which is supposed to turn Catalonia into an independent state with or without referendum.  This law, among other controversial features, would place the judiciary under control of the Catalan government and transfer Spanish public assets and civil servants to the new Catalan Republic. This unilateral plan for independence, initiated years ago, is not only undemocratic but also not very popular. Only 35% of Catalans support it according to the latest opinion polls. Even the Consell de Garanties Estatutàries (‘Council for Statutory Guarantees of Catalonia’), which members are jurists appointed by the Catalan President, ruled unanimously that this referendum breaches not only the Spanish Constitution but also the 2006 Catalan Statute of Autonomy.

Furthermore, the problem here is not only that the Spanish government does not want to organise a referendum, it is also that it cannot do it as it would breach the Spanish Constitutional order (see for instance Art 2). Spain is not an exception and recently other Constitutional Courts in Europe, such as the German and Italian ones, have ruled out the legality of any referendum questioning their territorial integrity and clearly stated that any attempt of secession from states or regions violates their constitutional order. The Italian constitutional ruling specifies that non-binding referendums cannot be equated to spontaneous exercises of people’s freedom of expression and that they must be developed within the limits of the Constitution. The unilateral referendum proposed in Catalonia clashes as well with several EU legal principles such as those of territorial integrity (Art. 4.2 TEU), respect to the national constitutional identity of Member States (Art. 4.2 TEU) and Rule of Law (Art 2 TEU).

As argued in a previous post, in addition to the usual legalistic reasons used by the Spanish government, several deontological and consequentialist arguments suggest that the referendum would exacerbate rather than solve the ‘Catalan problem’. Such consultation, even if the result is NO, would create a precedent for successive future referendums of independence in Spain.  A YES vote would trigger the partition of Spain with predictably traumatic social and economic consequences for Catalonia and the rest of Spain, and a new problem for the EU.

It is extremely unlikely that a legal referendum will take place, but it is not an impossible scenario. The Spanish Constitution may be reformed to allow a referendum for independence. But contrary to their claims, Catalan nationalist parties have not made any credible attempt to engage with the rest of Spanish political stakeholders in negotiations for such a reform. The Catalan government refuses both to participate in multilateral talks with other regional governments and to debate its project in the Spanish Parliament. Catalan nationalists have only considered a bilateral approach with the Spanish government, knowing that it does not have the capacity, nor the will, to give them the deal they request. Rajoy leads a minority government and such constitutional reform would require a 2/3 majority. Their rhetorical calls for negotiation have always included unrealistic conditions and have sought to use the rejection of Spanish authorities as testimony that there is no other solution than the unilateral independence of Catalonia.

Most players involved in the organisation of the October referendum know that it will not take place, or at least not in a way that could be considered procedurally democratic by the international community. Catalan nationalists are hoping that this new challenge may provoke some sort of disproportionate reaction from the Spanish government that could be used vis-à-vis the international community as evidence that their narrative of oppression finally reflects reality. However, it is highly unlikely that the Spanish authorities fall into that trap. The referendum is expected to be neutralised through legal actions and not via tanks in the streets of Barcelona or police repression. The frustration of the many Catalans who believe in this referendum is expected to benefit electorally the nationalist camp and serve to boost mobilisation again, keeping the independence process alive. 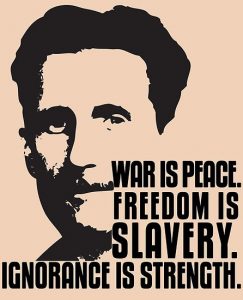 ‘Love Democracy’ was the slogan chosen by the organisers of the rally announcing the referendum. Unfortunately, as explained above, the unilateral illegal strategy that a minority of Catalans is using to separate Catalonia from the rest of Spain denotes little understanding and love for democratic principles and procedures. In order to prove appreciation for democracy they need to swiftly change strategy, abandon the unilateral path, respect the rule of law and engage with the rest of Spanish political actors in political talks to find a solution for the Catalan problem. Otherwise, ‘Love democracy’ will become simply another addition to the Orwellian ‘doublespeak’ repertoire which has served to frame Catalan politics in the last decade.

Jose Javier Olivas is an Associate to the Civil Society and Human Security Research Unit, at the LSE. He holds a PhD in Government and other university degrees in Public Policy and Administration, Economics and Market Research. He is currently teaching at the LSE and author of Iberian Military Politics: Controlling the Armed Forces during Dictatorship and Democratisation (2014, London: Palgrave Macmillan). Jose is founder and director of netivist. View all posts by Jose, follow him on twitter @josejolivas.

A bandwagon with a purpose

5 Responses to Does the Catalan Independence Movement Really ‘Love Democracy’?