Posted on December 6, 2013 by Eurocrisis in the Press 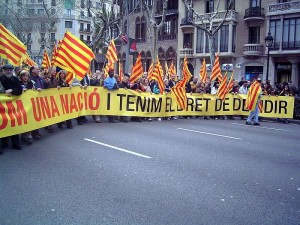 As we have seen with regard to other dimensions of the Euro Crisis, the discussion about the Catalan independence in Spain has also brought to the fore an interesting struggle over the framing of the problem. Probably the most important example of this is the successful introduction in the political and journalistic debate of the “right to decide” as a concept substituting the “right of self-determination” or “right of secession”. The reasons for its great success are easy to grasp: everybody loves to have rights and “deciding” seems a natural characteristic of democracies. In the Catalan public sphere the right to decide has become almost unquestionable; anyone daring to contest this right has been quickly accused of being a poor democrat. According to the supporters of the “right to decide”, this must be exercised by means of a referendum or consultation about “the future of Catalonia”. The problem is that so far this “right to decide” has not been clearly defined and even among the proponents of such a referendum the interpretations of its scope and implications remain very vague. To the extent that the contradictions in what the “right to decide” means have created a fracture in the camp of those supporting the referendum. The Catalan Socialist Party, PSC, has already shown strong discrepancies concerning the organisations of the consultation.

This article dissects this concept and argues that rather than an inalienable right, the “right to decide” is closer to a non-neutral euphemism which involves a coordinated attempt to influence public opinion.

There are linguistic problems stemming from the expression “right to decide”. “To decide” is a transitive verb so it must necessarily be followed by a direct object to complete its meaning.  However, in the case of the Catalan dret a decidir and Spanish derecho a decidir there is an absolute use of the verb “decide” without identifying the direct object it refers to. While many assume that what is going to be decided upon is whether or not Catalonia will become independent, others invite citizens to have a broader and more imprecise stance on what this pretended “right to decide” aims at providing.

On the other hand, the right of “self-determination” is a much clearer and more utilised concept in most languages and countries. The ideas that the “right of self-determination” evokes, such as sovereignty and self-government, resonate directly with the claims of the pro-independence movement in Catalonia. Thus, why introducing in the public debate a much more vague concept, “the right to decide”,  when we already had an expression that better captures what we want to talk about, such as the “right of self-determination” (dret d’autodeterminació in Catalan and derecho de autodeterminación in Spanish)? One answer is that the lack of concretion in meaning allows room for everyone to understand whatever they wish.

The emergence of this concept is not spontaneous but part of a well-orchestrated campaign. The “right to decide” became popular in 2003, during the campaign for the so-called “Ibarretxe Plan” which sought a de facto independence of the Basque Country from Spain. The Basque Country and Catalonia were not colonies but prosperous regions in a democratic country. They were not suffering oppression or negative discrimination in Spain. Therefore, claiming their “right to self-determination”, which is normally associated to colonies or oppressed minorities in non-democratic regimes, became problematic. The adoption and promotion of the neologism “right to decide” by the pro-independence camp meant a shift in its strategy reflecting an increasing concern for international recognition. Yet, in 2006 the Plataforma pel Dret a Decidir was created (PDD) with the financial support of the Catalan regional government Generalitat. In 2011, the UNESCO Centre in Catalonia published a report entitled “From the right of self-determination to the right to decide: a possible paradigm shift in the struggle for the rights of stateless nations”. The report was signed by Jaume Lopez Hernádez, who also was one of the founding fathers and president of the PDD.  The document puts forward some “proposals for action” to be followed by Nationalist parties and organizations aimed at detaching “the right to decide”, deemed a sovereignty claim, from that of “self-determination” and more importantly, justify this cause not simply on the principle of independence but on the principle of “democratic radicalism” and a return to the principle of “direct democracy”.

Is it a right? 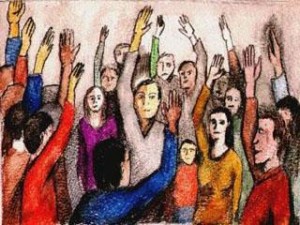 The “right to decide” more than a concrete right expresses a particular view on how a political system should operate. It is a claim in defence of a model of “direct democracy” in contrast with that of “representative democracy” currently operating in most western countries. The model of direct democracy, also referred to as “plebiscitary” or “Athenian democracy”, empowers citizens and provides legitimacy to decisions. However its disadvantages in practical terms have marginalised it in favour of a model of representative democracy. Some of the core problems of direct democracy identified by the political science literature emerge in the case of the Catalan “right to decide”. First, the choices offered to citizens would be few and fixed beforehand. Second, the citizens may not be interested or not agree with the options presented. Third, whoever has the power to compose the question has the capacity to shape its outcome. In the case of Catalonia a commission created by some (mainly pro-independence) parties is drafting the question and therefore the doubts about its neutrality remain really high.

Moreover, this vague “right to decide” is not codified or clearly specified in any national or international legal text. Although the notion of “freedom of choice” is inherent to democratic systems, before exercising this particular “right to decide” it would be necessary to define (and agree upon) its nature and scope.

The absence of such “right to decide” or “right of self-determination” in the Spanish legal system (as in most legal systems in the world) has been actually utilised by the Catalan pro-independence supporters to denounce a conflict between “political legitimacy” and “legality”: the “will of a people” against something as prosaic as “the law” and in particular against the Spanish Constitution. Some even referred to this as the “law vs. democracy” dilemma. However this is fundamentally an artificial debate driven by a political goal. It should not be forgotten that it is precisely the rule of law that guarantees most democratic principles, such as the protection of minorities and individual liberties. Recognising some trade-offs between “popular legitimacy” and “legality” is a healthy critical exercise. However, denying the legitimacy of a Constitution and a democratic legal system, such as the Spanish one, for not accommodating a pretended “right” that even its proponents have not managed to define is a dangerous and self-defeating exercise.

Finally, under the current legal framework, a referendum such as the one planned by the supporters of the “right to decide” in Catalonia in 2014 would be illegal or lack legally binding effects. The “right to decide” seems to be turning into the “right to express an opinion on a particular question defined by some political parties”. Despite the problems identified above, such as the imprecise meaning, nature and scope of the pretended “right to decide” and its questionable legality, enormous amounts of political effort and financial resources are being invested in Catalonia in its promotion. The result of this costly process is uncertain, much so because its goals were never clearly defined.

For the sake of transparency and accountability, the Catalan political debate should be again articulated around terms with clear meanings to avoid confusion, misunderstandings and frustration among the citizens. It is probably time to start calling things by their name and substitute the “right to decide” for the “right of secession” or “self-determination”. In fact, now with the renewed popularity of the movement many pro-independence supporters are ready to remove their masks and abandon the euphemisms. As Agustí Colomines, former director of the Catalan nationalist Catdem Foundation (linked to the government party CDC), admits in a video “the right to decide is garbage that we made up. This is the right of self-determination”. In the video one can also see the very influential Carme Forcadell, Chair of pro-independence Assemblea Nacional Catalana, encouraging him and endorsing his statement. This is what the debate is ultimately about.

Dr Sonia Sierra is associate professor in the Universitat Autònoma de Barcelona, UAB. She holds a PhD in Spanish Philology and MA in Spanish Literature. She is a founding member of the group “Brandenburg Gate“.  Sonia contributes periodically to a newspaper Crónica Global. Follow her on Twitter  https://twitter.com/soniasi02

18 Responses to On the “right to decide”