Posted on September 28, 2015 by Eurocrisis in the Press 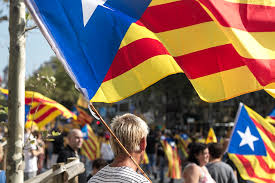 This time the polls got it right. The nationalist pro-independence coalition Junts pel Sí (‘Together for Yes’) won the elections. But arguably this has been a bitter victory. Their 62 seats are insufficient to rule the Generalitat and less than the sum of the seats obtained by CiU (50) and ERC (21) in 2012. Junts pel Sí needs the support of the other secessionist party, CUP (‘Popular Unity Candidacy’), to form a government. However, CUP’s leader, Antonio Baños, has already stated that they won’t vote Artur Mas for President. CUP will also likely request from Junts pel Sí to ignore Spanish and European law and make at some point a unilateral declaration of independence if a referendum is not agreed or organised soon. These two conditions will make the negotiations for the next government difficult. New anticipated Catalan regional elections are the likely scenario after the Spanish national elections.

Secondly, the pro-independence parties claimed that these elections were a ‘de facto referendum’ on the independence of Catalonia. They have demonstrated great strength but have fell short of the majority of the votes. Together, Junts pel Sí and CUP, have obtained more than 1.9 million votes but ‘only’ 47.9% of the total votes (37% of the electoral census). These results should push the Spanish government to address seriously the ‘Catalan problem’, but at the same time clearly delegitimize a potential unilateral declaration of independence.

Cat Sí que es Pot (11 seats), PP (11) and UDC (0) have been the main losers of the elections. The poor results of the left-wing coalition Cat Sí que es Pot are very bad news for Podemos and Pablo Iglesias, who was heavily invested in the campaign. This can be interpreted as a sign that Podemos does not seem to possess the momentum to overtake PSOE as the main left-wing party in Spain.

On the other hand, the centrist Ciudadanos (25 seats, 9 in 2012 ) emerges as a clear winner from these elections. Ciudadanos will lead the opposition to the next nationalist government in Catalonia. But most importantly, these good results reinforce the credibility of Albert Rivera and Ciudadanos as alternative to PP and PSOE in the upcoming general elections.

These elections have confirmed that Catalonia is a deeply divided society. Unilateral solutions, even when they seek to impose the ‘will of the majority’, are unlikely to deliver satisfactory results in the long run. In cleavaged societies such as the Spanish and Catalan ones, the respect of minorities and consensus-based decision-making are usually considered more effective and democratic. After the 27S Catalan elections, more than ever, dialogue and negotiation across these well entrenched camps seem unavoidable.

6 Responses to A bitter victory for Catalan pro-independence nationalists