Posted on October 6, 2015 by Eurocrisis in the Press

To what extent does twitter provide a platform for the emergence of a European public sphere? Around 47% of Europeans use social media at least once a week, making it a potentially important source of information and a promising platform for debate. Indeed, it has sometimes been suggested that the interactive affordance of social media may provide the ideal platform for a more participatory public, and for a transnational one structurally less confined to the borders of nation states.

By tracing the visibility of EU (and Eurozone) issues, or issues relating to European countries in national twitterspheres we can gain an impression of how twitter is Europeanized:  the volume of tweets using specific keywords allows researchers to detect whether national twitterspheres synchronise around specific issues or events, while the multi-directional interactive nature of twitter allows us to observe cross-border interactions between users, both of which can be understood as indicators of Europeanization.

We report on results from our study which maps the European twittersphere by tracking twitter activity during key European events. Part of our study focuses on the recent negotiations leading up to the third Greek bailout agreement. The stage for these negotiations was set by months of acrimony between the newly elected Greek government and its creditors. An agreement between the Greek government and its creditors was finally brokered at a European Council summit, which was tensely anticipated because a Greek exit from the Euro, or even the EU, no longer seemed improbable, but a real possibility.

Among other questions, we were interested in how tweets were distributed across countries (degrees of Europeanisation), and the amount of boarder-crossing interactions between users in the European twittersphere. Through the twitter streaming API we downloaded tweets matching a set of keywords relevant to Eurogroup and European Council meetings between 12th and 13th of July. We used the Google Maps Geocoding API to convert the user-specified location data to geographic coordinates.

Following Tusk’s tweet, activity is at its highest – between 9am and 10am alone we collected 15,376 tweets from users located within the EU28. Tweet volumes by country are plotted in Figure 1. While the second peak clearly relates to the conclusion of the summit, the first relates to the emergence of the #thisisacoup hashtag the previous night. 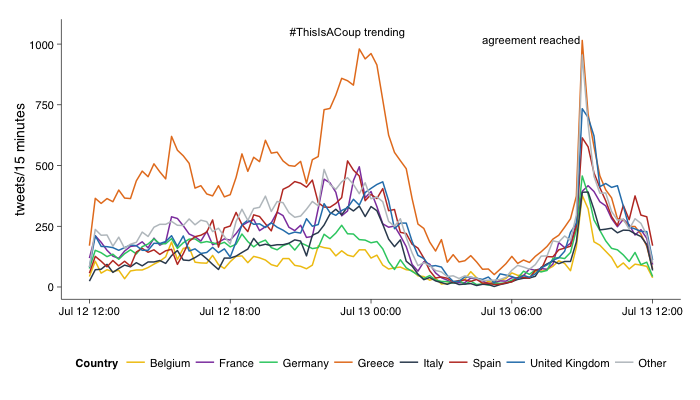 Tweets about the EU, Eurozone and its members are clearly synchronised around key mini-events throughout the negotiations, with peaks and troughs mirrored across national twitterspheres. Figure 2 shows tweets containing the hashtag #thisisacoup that emerged during the summit negotiations. It shows that commentary and/or sentiments are tweeted and can find their way across borders – the #thisisacoup hashtag emerged in Spain and quickly spread to Greece and other countries, expressing discontent about the treatment Greece was receiving from its creditors. 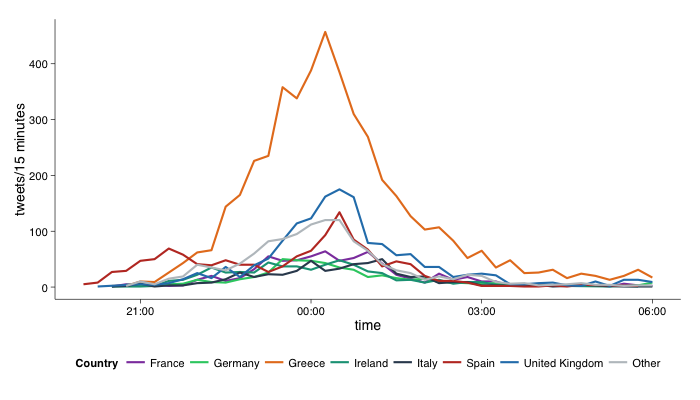 As social media allow users to interact, we can also study the extent to which twitter users from across Europe are connected and interact—the extent of transnational communication. Twitter provides a way to test this. To examine such interactions we looked at cross-border flows of tweets, including replies, quotes or retweets. Although the mere presence of a link between status updates is not necessarily an indicator of closeness between twitter users, at a minimum it shows cross-border awareness, endorsement or even conversation:  Similar to using a hashtag like #thisisacoup, users might retweet or quote someone else’s update (perhaps because they find it particularly informative or witty) to make their followers aware of it, or to add their own comment. Figure 3 shows cross-border replies, retweets or quotes of other tweets in our dataset (for which location data were available). 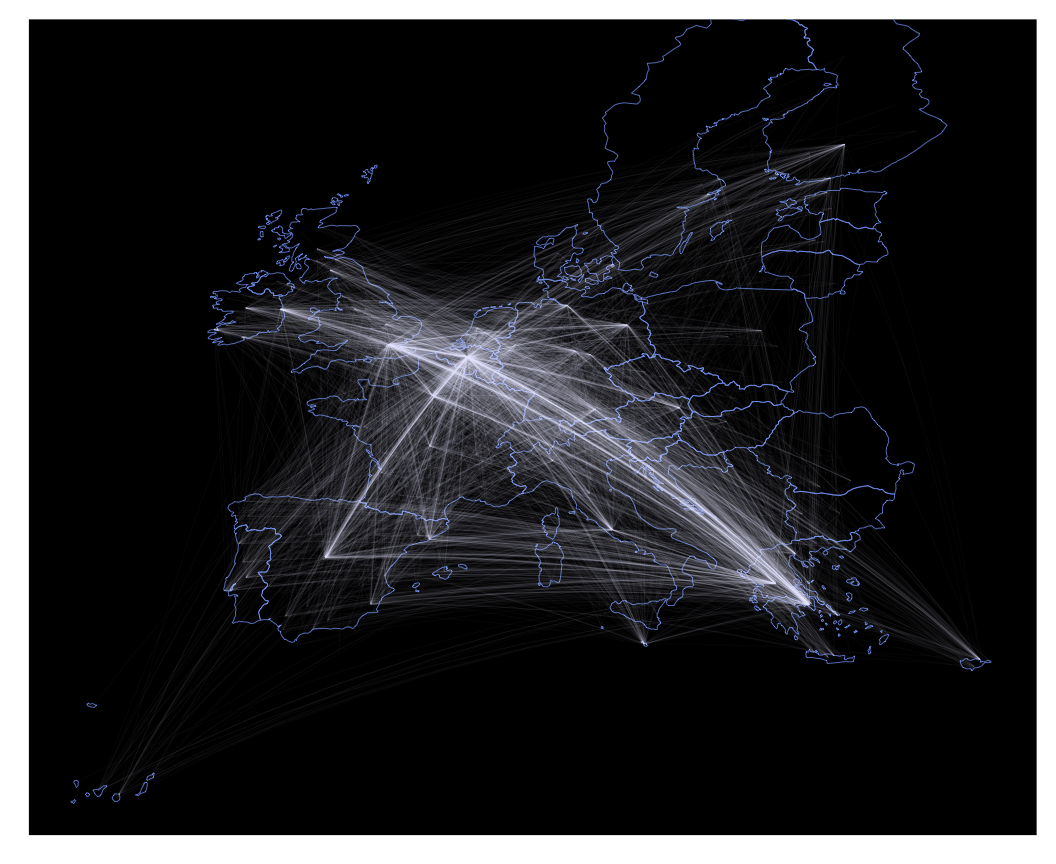 The vast majority of collected tweets are retweets, which at least indicates awareness—though it does not necessarily indicate active participation on the part of users. In this sense a retweet may be more akin to recommending a newspaper article or TV programme to your acquaintances, than entering a conversation. Nevertheless, it seems likely that national boundaries are more porous on twitter than they are for broadcast media.

Our research to date indicates some evidence of a European twittersphere, in which there is both a pan-European interest in EU issues, synchronisation around mini-events, and evidence of cross-boarder interactions. Twitter provides a rich data source that does not only allow researchers to see how people interact across borders, it also provides the opportunity to look at the underlying communicative structures that transport issues and debates across Europe’s public spheres. We will dig deeper into European twitter data to better understand the extent of transnational conversations, and to examine how porous national boundaries within the European twittersphere actually are. As more results emerge we will be publishing highlights here.

This entry has been updated on 28 July 2019 to reflect the publication of the underlying research.

Max Hänska is a Lecturer at De Montfort University, an associate at LSE IDEAS, and the lead investigator on the Euro Crisis in the Press project.

The Missing Crisis – European citizens, the media and communication about the crisis

Who’s reporting the crisis? The state of the media in Greece

4 Responses to #aGreekment in the Twittersphere