Who’s reporting the crisis? The state of the media in Greece

Greece has been ranked 84th among 179 countries for freedom of the press, according to the 2013 World Press Freedom Index published in January 2013 by the international NGO “Reporters Without Borders”, with a staggering fall of fourteen positions from the previous year. The report attributes this “dramatic” and “disturbing” slump to the “disastrous social and professional atmosphere” within which Greek journalists work. Undoubtedly, this atmosphere is closely related to the economic crisis in the country, which is also experienced as a deep political and social crisis. At the same time, however, the journalistic sector has extreme difficulties escaping the trap it has created for itself due to its close links to the political establishment. Recent developments in online news media do not give much hope for substantial change in the Greek public sphere. 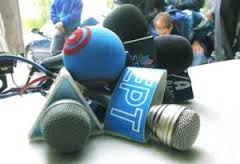 The 2013 World Press Freedom Index reflects “the degree of freedom that journalists, news organizations and netizens enjoy” in different countries and the performance of each government in respecting and ensuring this freedom. Greece’s  84th position puts the country one place behind Togo and one before Kosovo, and last among the members of the European Union. The report acknowledges two main challenges for Greek journalists: on the one hand public condemnation and anger, on the other, the exposure to violence from the police and  extremist groups, which has considerably worsened over the course of the last year as a result of the “ultra-violent neo-Nazi activists of the Golden Dawn party”.

Indeed, incidents of Greek journalists and photojournalists experiencing police violence have increased in the last couple of years, a phenomenon about which Amnesty International has repeatedly expressed concerns. In one of such cases, journalist Manolis Kypreos suffered permanent loss of his hearing because of a stun grenade used by the police, while covering a demonstration in Athens in June 2011; in another one, a riot policeman was caught on camera punching photojournalist Tatiana Bolari in October of the same year.

Pressure on journalists has further increased, since the entry of Golden Dawn in the Greek parliament last year. The first press conference of the party leader, Nikolaos Michaloliakos, just after the release of the electoral results, immediately set the tune of the party’s relationship with journalists, as reporters waiting for Michaloliakos to arrive were ordered to stand up as a sign of respect, and those refusing to do so were expelled from the room. Since then, party members have overtly and routinely threatened journalists. The silence with which  Golden Dawn’s extreme acts are dealt with by the mainstream press and national television channels can be largely attributed to the creation of this atmosphere of intimidation.

Implicit threats aside, incidents of explicit state censorship are also on the rise. Despite promises for its restructuring in the past years, ERT, the publicly-funded and state-controlled broadcaster, has remained a highly bureaucratic and unnecessarily augmented institution, under even tighter government control. If implicit (self)-censorship in order to abide by the governmental political line was a common practice in the past, this has been substituted by more explicit strategies of direct censorship of ERT’s journalistic staff.

In this battle against violence and censorship, Greek journalists can hardly count on the support of the wider audience. For the Greek public, the current crisis of the media is generally seen as the rightful demise of a sector undermined by corruption and clientelistic relations with the big political parties. Since the liberalisation of the Greek media landscape in the late 1980s, private TV channels, radio stations and newspapers have proliferated to the degree of creating an ultimately unsustainable sector compared to the size of the country, which survived mostly on the capital of its parent companies or consortia rather than advertising and sales. The country’s major media outlets, television channels and newspapers, are indeed owned, co-owned or directed by the business elite, which has strong connections and interests in other sectors of the economy, often but not exclusively in shipping. Given the paternalistic nature of Greek economy and the overall corruption, this has contributed to the construction of a complex web of interests between media, business and state, expressed through assignment of government contracts to parent companies or tax exemptions for big media outlets in return for favourable handling of government policies, or outright silence over political scandals. In this context, the media are widely seen by the public as part of the political and economic establishment that led the country to the current crisis rather than its watchdog.

Unlike the political sector, however, there seems to be a ray of light for forthcoming change within the media. Independent media, such as alternative news magazines, host efforts to investigative journalism, a concept hitherto underdeveloped in Greece, while online and social media have given space to alternative voices and analyses. It is on these efforts that the latest political pressures and various forms of censorship are being applied lately.

Kostas Vaxevanis, the editor of the independent news magazine Hot Doc, is an illustrative case, whose story has also been addressed by international media. The journalist, who has been employed as a war correspondent by the state broadcaster in the past, was arrested in October last year for publishing the “Lagarde list” with the names of alleged Greek tax evaders – some of them media owners – on the charge of breaching private data – incidentally, none of the people named on the list have been prosecuted yet. Although Vaxevanis was initially acquitted, he is to face retrial in June of this year, after the prosecution  filed an appeal. In the meantime, he has been awarded the “Index on Censorship” journalism award and has lately revealed an alleged assassination plot against him. Both events have gone largely unnoticed by the mainstream Greek media.

In other recent developments, the server of the alternative platform Indymedia Athens was shut down after government pressure, a move that was greeted with a congratulatory Twitter message by a conservative MP to the minister that ordered the closure. In another political bullying move, the director of the PM’s press office revealed the identity and publicly condemned an anonymous satiric blogger on social media, which raised a torrent of complaints on Twitter but was hardly discussed in the mainstream media space.

These movements of political pressure, bullying and overt censorship are of course expressions of the panic of a political establishment that is losing the firm grip on journalistic output it has hitherto enjoyed. At the same time, the blatant and unapologetic way in which these interventions take place are indicative of the sense of entitlement politicians feel they have over controlling public discourse, which has been cultivated over decades of journalistic obedience and lip service paid to the establishment.

How this battle between the political status quo supported by mainstream media, on the one hand, and the emergent alternative media enabling investigative journalism, on the other hand, will play out in a context of deep political, economic and social crisis, is unforeseeable. The interest of the Greek public in this conflict, however, is also disputable. The battle often seems to become self-referential, reflecting a struggle over who will define the terms of public discourse, rather than an attempt to secure transparency and citizens’ right to information. In this context, alternative journalism comes across as an emerging sector defending itself against the traditional political powers rather than the public and its interests. This will do little to improve journalists’ reputation. In the public imaginary the media is still a homogenised sphere, stigmatised by negative connotations of corruption and clientelism, which makes it hard for alternative journalistic voices to be heard and accepted. At the same time, alternative and social media reach a rather limited, young and well-educated population. As noted earlier in this blog, internet penetration is still low in Greece, with only about 50% of the population having access to the online space.

What the future holds for Greek media is, therefore, uncertain and closely tied to the political and economic future of the country. In the meantime, a resentful population is lacking vital information about policies and practices central to its welfare and falls prey to the voices that are louder, echoing populist discourses, whether these come from the right or left side of the political spectrum or even journalists themselves. In other words, despite emerging trends in the media sphere, little seems to be changing for the Greek public.

4 Responses to Who’s reporting the crisis? The state of the media in Greece