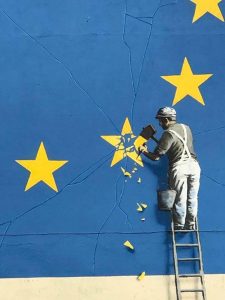 It is plain, and painful, to see: Europe’s existential crisis, which broke out almost eight years ago, far from gradually finding its solution, is worsening month by month. Not without a certain amount of irony, the disintegration of the “ever closer Union” imagined by the Treaty of Rome, took place, with the UK formally triggering Article 50, only days after the pompous celebration for the 60th anniversary of that very same Treaty.

It cannot be by chance, however, that in the “Declaration of Rome” produced by the Heads of State and Government on March 25th, amongst the “unprecedented challenges” the Union is said to be facing, there was not the slightest reference to the centrifugal tendencies and the disintegrative dynamics that are tearing Europe apart.

In this, today’s European leadership seems blithely to repeat the mistakes of the last century, resembling the fatal proceeding of those European leaders who sleptwalked through the 1930s: they did not see – or preferred not to see – the contradictions they had before their eyes, until they exploded, swamping them and the whole of Europe.

Today, the EU is crumbling under the joint effect of two powerful crises: the Mediterranean refugee crisis and the never-ending crisis of its “greatest achievement”, the euro. Two accidental crises? Not exactly. Both expose the failure of a project that wanted to unify Europe, yet now appears to risk dividing its peoples, spreading economic misery and feeding new nationalisms.

No doubt, the fatally flawed “economic rationale” behind the creation of Europe’s single currency was plain to see since the very beginning.[1] The flawed political assumption behind the “choice for the euro” was however that a political community would emerge as a result of the creation of a common currency – in the Marxian belief that economic base determines and shapes the political and ideological superstructure.

As recent history dramatically proved, the functional gamble, implying a sequential relationship between ‘euro’ and ‘Europe’, tragically failed. Solidarity – the only currency Europe desperately needs – is not the product, but the prerequisite for a truly European community of destiny, let alone a single-currency arrangement, to work – especially in presence of asymmetric shocks.

Who is paying the bill for the lost game? Not Germany, which has enormously benefited from the fixed-exchange rate arrangement, of which the euro is merely the symbol (see the Bundesrepublik current accounts sheets), but Europe as a whole, which today resembles more a “waste land” than the promised land of prosperity propagandised in 1990 One Money, One Market: [2] a continent of widespread economic misery, of unprecedented unemployment, of shrinking democratic control over decision-making processes and – perhaps worst of all – of mutual and increasing distrust, resentment and hostility between its peoples.[3]

How was that possible? According to the official storytelling, because peripheral countries have not done their “homework”: were their sovereign debt contained, the balanced deficit brought close to zero and salaries further reduced, problems would naturally disappear and Europe finally prosper[4].

Today, no serious economist, let alone a sentient political leader, considers this view (broadly coincident with current thinking at EU level, as reflected in the 2012 document Towards a Genuine Economic and Monetary Union) as an honest account of the problems afflicting Europe, nor remotely a remedy for its fast-deteriorating health (see the increase in the average debt ratio within the eurozone in these years of imposed, or self-adopted, “fiscal consolidation”). On the contrary, the longer the charade of attempting to technically ‘resolve’ the crisis goes on, the bigger the losses and the more devastating the inevitable crisis will be.

Why? Because the crisis at the core of the European project has nothing to do with technicalities. Its origin lies in the absence of the most precious – and most neglected – ingredient in the European integration process: the non-economic bonds of solidarity amongst the peoples of Europe.

If anything, the eurozone crisis has shown that a form of unity based on economic utility is highly unstable: with the dwindling of material advantages, nothing remains to keep the EU countries together, thereby paving the way to centrifugal tendencies. What we see today is precisely the lack of political willingness of richer EU countries to share with the poorer not only rules and institutions, but also burdens and benefits. And no monetary union can work without fiscal redistribution (let alone all the shortcomings of a monetary arrangement solely aimed at price stability and the profound doubts about the desirability of the so-called “political independence” of the main institution serving a country’s monetary policy, the Central Bank).

The refugee crisis affecting Europe’ shores – itself the result of fundamental strategic mistakes in the foreign policy concepts adopted in recent years both at NATO and EU level – is confronting us with the same, miserable truth: “chanting Europe as a mantra” (Tony Judt) cannot alter the mundane reality that no sense of solidarity, no sense of a common destiny is shared by the members of that “unidentified object” which is todays’s European Union.[5]

Italy, subjected to a disproportionate share of the incoming flows of refugees,has been abandoned to cope with the emergency alone: a fair redistribution of refugees in Europe, like any redistribution of financial resources within the eurozone, would indeed require the missing and intangible brick of solidarity.

As a result, tensions between EU countries over how to share the “burden” of refugees are rising, while an inability to create and deploy a coherent set of policies to manage the flows is helping increase support for the far-right parties in Europe.

Dancing to the music of financial markets and speaking the language of globalisation, while entire peoples sink into the waters of recession and poverty, the EU seems politically doomed, unable to fulfil the promise of shared prosperity and social security for its peoples. So, whilst the problems of the Continent grow in intensity and complexity without finding concerted – nor concrete – solutions, nationalism is gaining new momentum at every latitude.

Today, history is tragically proving that resentment and hostility can still take the place of amity and cooperation in Europe. More significantly, it is showing what should have been known to our leaders, namely that there are no shortcuts to achieving the goal of political integration: technical and economic cooperation have been proven to be insufficent to generate a true political community.

What Europe needs is solidarity, political governance and democratic sovereignty, id est a radical re-thinking of the integration method so far adopted. It is time for a new European thinking if we want a European renaissance, otherwise pro-EU pledges will be meaningless and Europe will continue to march towards disintegration. Indeed, as long as this critical political exercise is postponed, tensions and contradictions in Europe seem doomed to grow, and could ultimately detonate in forms we refuse to imagine.

Federico Nicolaci is Political Adviser working for the Holy See, Città del Vaticano. He studied Politics and Government in the EU at the LSE and Diplomacy at ISPI (Istituto per gli studi di politica internazionale). He is the author of Tempio Vuoto. Crisi e Disintegrazione dell’Europa (Mimesis, 2013) and other essays.

Related posts on LSE Euro Crisis in the Press:

2 Responses to Renaissance or Decline? Europe‘s Crisis of Solidarity