Posted on November 28, 2017 by Eurocrisis in the Press

One of the most remarkable feats of German post-war history is the way it has  made continual efforts to work through its past. Monuments commemorating those killed by the Nazis can be found in virtually all German cities – not only as grand Mahnmale (solemn and cautionary memorials), but also in small gestures like the more recent project Stolpersteine. On any given night documentaries on Nazism are aired on TV. That this mandated Erinnerungskultur (culture of remembrance) could produce its own kind of resistance is once more becoming apparent now, most recently in some of the comments by representatives of Alternative für Deutschland (AfD). But the post-election climate also revealed a contrast between the wholly deserved attention the Erinnerungskultur gives to Nazism and the silence with which other developments of national significance have been met. 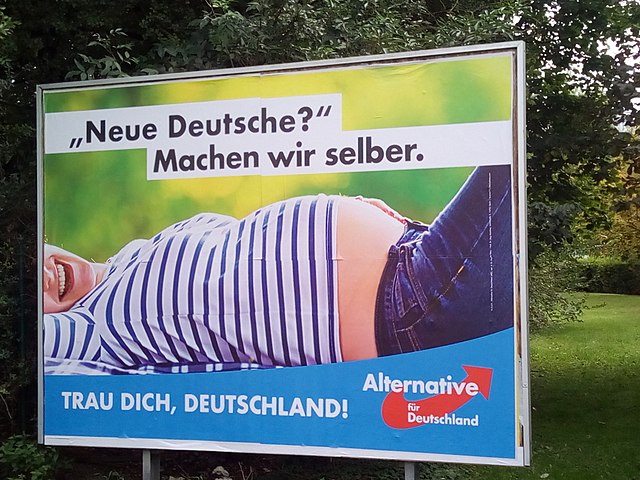 It can seem perplexing that a country which has found a way to speak openly about the darkest epoch of its past has not found a way to talk about its present and the multilayered diversity in which it is embedded—reunification, immigration and Europe. Germany has been contently avoiding deeper reflection on its own identity. The 2017 election campaign shaped up as an effort to keep these fissures papered over. The CDU’s campaign relied on Angela Merkel herself along with innocuous placards reading “For a Country in which we live well and happily” (“Für ein Land, in dem wir gut und gerne leben”). The unmistakable subtext was one of: Let’s keep going as we have, let’s remain in our comfort zone. Yet without a discourse that grapples with internal and external diversity, without an effort to openly thematise this multiplicity in the national discourse, fissures can grow into chasms. Failing to find a voice that can address such matters leaves the field of identity to reactionary populists.  Three important fissures will be discussed here: East-West, immigration, and Europe.

The most obvious – and to some degree perpetual – targets of blame for the success of the AfD are East Germans. One strand of public discourse sees them as eternally dissatisfied Jammerossis (‘whiny Easterners’) or as embarrassing provincial cousins of the more cosmopolitan modern German; a people who keep feeling hard done by despite having been stuffed to the gill with subsidies, provided with a renewed infrastructure that is frequently newer and better than in older parts of the Federal Republic, and who hosted the original Pegida movement as well as regional offshoots. Indeed, in this parliamentary election, the AfD received 27% of votes in the federal state of Saxony, and in the Eastern part of the state this went up to 35.5%. Among East German men, AfD proved to be the most popular party.

One possible explanation for the AfD’s success in the East is that mainstream German public discourse omits subtle aspects of the East German experience for the convenience and undisrupted continuity of the West German grand narrative. With re-unification, the Federal Republic effectively ingested the East, saddling it with its political and economic norms and institutions. The expectation was that with ingestion the East would converge towards the West. With the collapse of the Soviet Union, and the triumph of the West, the remorseless consensus was that there was little worth salvaging from the experience of this Unrechtsstaat (state with a systematic absence of the rule of law). And while reunification has undoubtedly raised standards of living, it can feel like an affront to the former citizens of the GDR that theirs was at best a failed political experiment, and that the East German experience has nothing of value to contribute to reunified Germany.

Income inequalities between East and West remain pronounced and are on the rise across Germany – a development that is especially worrying for those who came of age amidst the GDR’s socioeconomic equality. The solidarity and collective sense of belonging that came from working together in enterprises and factories was never replaced or forgotten, though often disavowed, even as those enterprises were shuttered or sold off in often dubious fire sales. This lead to a breakdown of communities, especially in smaller towns, as jobs migrated to the West, and many of those with higher socioeconomic mobility moved to more prosperous parts of the country, leaving behind beautifully restored towns that felt lifeless for the absence of those who migrated westward.

While this does not fully explain nor exonerate AfD’s staggering popularity, it can perhaps provide a better understanding of the grievances and alienation that right-wing politicians and movements were able to exploit. A public discourse which generally disavows, sidelines, or ignores these lived experiences—which leaves no space for what citizens may feel was good and worthwhile in their experience of the GDR—provides ample space for populism to capitalize on grievances which the country hasn’t found a voice to address.

The experiences of 1st and 2nd generation immigrants have been similarly marginalised. The fact that the children and grandchildren of immigrants are still frequently treated as non-Germans is particularly aggravating given that every 5th German has a ‘migration background’. When immigrant workers from countries like Italy and Turkey came to Germany as Gastarbeiter to bolster Germany’s ‘economic miracle’ in the 1950s and 1960s, it was assumed that most of them would eventually return to their countries of origin. When they didn’t, it was then assumed that they would fully assimilate, shedding most of their cultural heritage. However, this imagined assimilation was not only unrealistic to start with, it was further hampered by the absence of a proactive integration policy.  For example, social mobility and educational attainment amongst children of Turkish immigrants is well below the national average, leaving many children of immigrants unable to rise above the (often) low-status low-pay work of their parents.

Here, too, Germany is in need of a discourse that acknowledges its own internal diversity. It requires a discourse that goes beyond caricatures, or the occasional celebration of the national football team’s diversity. In popular culture, immigrants or those of migrant background are often portrayed as prototypical villains, or essentially Germans with a different complexion and a cultural quirk—such as unusually involved and protective parents—that are supposed to signify migrant patina on persons otherwise undistinguishable from a ‘prototypical German’. Indeed, this challenge is perhaps even more pronounced in the former East, which historically had very little experience of immigration. Apart from the presence of some foreign students, political refugees and guest workers, foreigners were something to sympathise with in the abstract (for example in solidarity campaigns and anti-colonial slogans), but rarely encountered in real life. Xenophobic tendencies were then easily subsumed into a broader discourse that laid blamed for social grievances at the feet of all those perceived as undeserving outsiders.

A discourse that assumes assimilation to a notional Germanness cannot and will not yield the kind of self-understanding that Germany needs. It raises expectations of internal homogeneity that are immediately contradicted by the reality of the country’s composition. This is particularly crucial after more than a million refugees entered the country in 2015, many of whom hope to settle in Germany. The fact remains that the national discourse needs to find a way of accounting for the lived experience of the GDR and for the lived experiences of migrants that have made Germany their home—and that space cannot be predicated on full assimilation to some notional Germanness. Only a discourse that properly acknowledges internal diversity can begin to articulate some shared cultural coordinates of what Germany is today (something that the discussion around a Leitkultur attempted – but failed to – to establish).

The sovereign debt crisis in Europe pitted creditor and debtor countries against one another. German discourse parsed the crisis as a matter of PIIGS having yet to appreciate the value of prudence that Germany views as one of its virtues. If only Greece could muster the thrifty fiscal restraint of the proverbial Swabian housewife, its problems would be overcome. Never mind that it is simply impossible for all economies to become net-exporters. Here too the convenience of assuming that others will converge on your terms betrays an unwillingness to find a way to speak about — and to reconcile oneself with — Europe’s diversity.

The same reticence to engage with diversity was on display in Germany’s failed coalition negotiations, as the Government-in-the-making considers how to respond to Macron’s outreached hand, and his aspiration to breathe new life into the European project. To many observers, a Franco-German tandem  is needed for Europe to move forward. Yet, the overwhelming risk is that a Germany too comfortable to discuss the necessary will stick to its ways, assuming that Europe must become more like it, not the other way around.

Germany may well stick to the convenient myth that the former GDR, migrants and its European neighbors must simply assimilate West German virtues and values – that they must become more German. Yet this myth chafes against the fact that today’s Germany was forged by bringing together peoples with half a century of divergent political, social and economic experiences. It chafes against the fact that many Germans are of immigrant-descent—a fact that that cannot be lessened by characterising those who have not fully assimilated as aberrant. And it chafes against the fact that Germany finds itself in the middle of a diverse continent—a fact that cannot be circumvented by characterising European neighbors as wrong-footed for their lack of supposed German virtues. What Germany needs is an effort, commensurate to that of the Erinnerungskultur, to speak truly and sincerely about the multi-layered diversity which characterises the county and its place in Europe.

Maria Brock is a postdoctoral researcher at the Centre for Baltic and East European Studies (CBEES) at Södertörn University, Stockholm. She holds an MSc in Social and Cultural Psychology from the LSE and a PhD in Psychosocial Studies from Birkbeck. Broadly speaking, her research is located at the interstices of the humanities and social sciences, and evaluates the psychosocial dynamics of transitional and post-transitional societies focusing on the former Eastern Bloc, and the former GDR and Russia in particular.

Max Hänska is a Lecturer (Assistant Prof.) at De Montfort University, an associate at the LSE’s Civil Society and Human Security Research Unit, and the blog’s founding editor. He was previously a postdoctoral fellow on the Multidisciplinary Opinion and Democracy Research program at the University of Gothenburg. His research focuses on social media as platforms for political communication and citizen journalism, and the impact of communication on democratic decision-making.

This entry was posted in Europe, Germany, Maria Brock, Max Hänska and tagged AFD, Erinnerungskultur, European identity, German Elections 2017, populism. Bookmark the permalink.
We use cookies on this site to understand how you use our content, and to give you the best browsing experience. To accept cookies, click continue. To find out more about cookies and change your preferences, visit our Cookie Policy.