Posted on February 9, 2016 by Eurocrisis in the Press

As a Greek citizen long resident in Britain, I cannot help noticing the almost complete absence of any sense of European identity in the UK. It seems that Britain has never really seen itself as part of Europe. Britain has never felt comfortable with the ‘Continent’- and, as the linguistic register suggests, what separates the two is much more than the few miles between Dover and Calais. 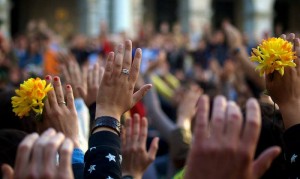 The same distance is also true when it comes to the EU institutions. Britain has had a ‘special relationship’ with the EU for a long time, and Cameron’s negotiations have only served to re-affirm this desire to remain aloof. The key demands he has made – of staying out of an EU ‘superstate’ and refusing equal rights to EU migrants – are part of a long tradition of not joining in. There has been little enthusiasm in Britain for the ‘spirit’ of the Union, no desire for anything more than an instrumental relationship.

The same lukewarm attitude is reflected in the official ‘in’ referendum campaigns. Only a very small part of what the European project is or could be, is seen as relevant for Britain: it is good for business, and, yes, it may help maintain Britain’s position in the world – and one sometimes has to join the ‘allies’ in their dubious foreign endeavours. But it would be un-British to get too involved. No wonder the ‘out’ campaign is in the lead by nine points.

To be fair, it is not only Britain which is keen to retreat to its national borders and prioritize its national interests. The recent Swedish and Danish proposals that amount to the cancellation of Schengen are a self interested response to what actually is a European-wide challenge. The inhumane response of individual member states to the refugee crisis, though not entirely attributable to a failure of EU leadership, is symptomatic of a wider lack of commitment to collective solutions or collective solidarity – either with our fellow Europeans or our near neighbours.

The EU has often disappointed us, but its problems are not confined solely to its economic and political institutions. Perhaps its biggest failure has been its inability to forge a European identity capable of transcending national borders. The emergence of new nationalisms (exploited skilfully by the far right), is an extremely worrying result of this failure.

The dramatic failure to respond to the financial crisis of 2007-8 and the structural deficiencies of the Eurozone have created new divisions between North and South, as countries like Greece, Spain and Portugal have been hung out to dry with the imposition of severe austerity measures, leading to further recession and massive unemployment. And nowhere more than in the case of Greece has it become so strikingly evident that EU institutions – far from being the embodiment of European ideals – are unaccountable and undemocratic. They have cancelled democracy and replaced it with a bureaucratic and hollow structure: it seems that none of the ‘people’ of Europe is welcomed into its decision making processes.

Because of all these problems, part of the Left fantasizes about the progressive politics that will follow from a retreat to the nation state. Unfortunately, transnational economic forces do not recognise borders and national institutions are even less capable of resisting their onslaught. But to counter this by simply affirming that we can act more effectively together risks overlooking our lack of a collective identity that could inspire and sustain resistance.

One reason that this has not yet materialized is the lack of a common communicative space. While the distance between Britain and the ‘Continent’ is shrinking, and more and more Britons holiday or relocate somewhere over the channel (and vice versa),the information gap remains as wide as ever. We know little about each other’s history, politics and culture, and are equally ignorant about EU institutions.

If things were different, the myth ‘of the lazy, frivolous Greeks’ responsible for their own crisis wouldn’t have circulated uncontested in the British media. If things were different, we would have been more shocked by the decision of the Danish parliament to seize assets from refugees, and above all we would have responded collectively, with a solidarity unrestricted by local nationalisms.

New media technologies and social media do, however, offer the potential of developing a new communicative space, and it is a space that European movements and grassroots campaigns have already utilized in their response to the European dystopia. Although one should not overstate their impact or ability to engage broader audiences, these new information channels have opened new possibilities – possibilities that find expression in initiatives like the For a Plan B in Europe or the DiEM25 (Democracy in Europe Movement 2025).

The EU referendum could be a platform for affirming our common identity and reclaiming our European institutions. Another Europe is possible only in so far as we recognize ourselves as the new Europeans, and seek communication avenues for our collective resistance.

Another Europe Is Possible will hold its launch event at 7pm on the 10th February at 93 Feet East, Brick Lane, London, UK. For more details and to secure (free) tickets see here

Marina Prentoulis teaches Media and Politics at the University of East Anglia, UK. She completed her PhD in Ideologies and Discourse Analysis at the Department of Government, University of Essex. She has lectured in a number of universities including City University, Open University and University of Middlesex.

Euroscepticism at a Junction: Antagonising the EU for the Sake of it is Risky

This entry was posted in EU ref, Euroscepticism, Nationalism, United Kingdom and tagged another europe, Brexit, EU referendum, European identity, Euroscepticism. Bookmark the permalink.
We use cookies on this site to understand how you use our content, and to give you the best browsing experience. To accept cookies, click continue. To find out more about cookies and change your preferences, visit our Cookie Policy.