Democracy without choice – or just ‘the economy, stupid’? Political support during the Eurozone crisis

Posted on November 6, 2019 by Eurocrisis admin

Between 2008 and 2014, satisfaction with democracy and the trust people had for their political institutions collapsed across most of Europe, but most severely in Southern Europe. Was this decline about the loss of citizens’ democratic choice due to the economic interventions or just the economic turmoil that surrounded them? In a new paper, Daniel Devine provides evidence that the likely cause was the economy rather than concerns about democratic processes. 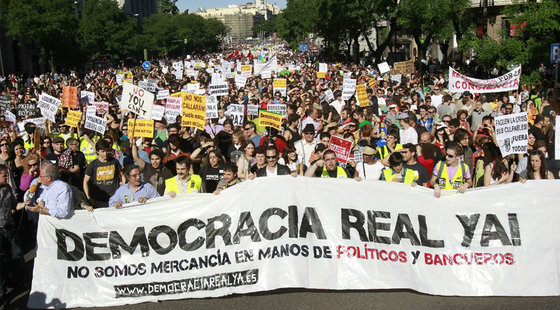 The mass protests following the economic crisis in 2008 particularly, but not only, in Southern Europe, were concerned not just with the dire economic situation facing the majority of Europe, but how and where decisions were made. This is captured in an interview with an activist for the Barcelona-based Real Democracy Now, who said: ’We believe that real democracy is no longer possible in one country, but on a European level […] The commission, the European Central Bank – they are imposing austerity on us, yet they are not democratic institutions’. In the same tone, a call-to-arms pamphlet, Indignez-Vous, which sold over a million copies and united the European protest movements, decried the power that financial capital had to undermine European democracies. The movements were, of course, about the economic and social impacts of austerity, but also how and from where the policy was implemented.

This argument resonated with a long history of concerns from politicians and academic researchers about the consequences of the locus of political and economic power moving away from the nation-state – either upwards to the international level or downwards to regions. Even in 1999, Fritz Scharpf argued that political legitimacy in Europe would weaken as European and global economic integration proceeded. The removal of some policy choices from domestic democratic contestation to the European level was seen as a potential threat to democratisation in Eastern Europe.

The Eurozone crisis and resulting economic interventions are a unique and extreme case of this ‘democracy without choice’. During this period, Ireland and countries in Southern Europe experienced a set of structural reform programmes requested by international and supranational organisations. The memorandums of understanding between the European Union, International Monetary Fund and national governments meant that future policy programmes were largely decided beyond the reach of popular influence and democratic choice. Elections no longer seemed to matter – and the link between public preferences and policy outcomes was severed.

Did this result in people losing trust in their political institutions and becoming dissatisfied with democracy? Despite the logical connection, academic research has so far not reached a firm conclusion. Many argue that the primary driver of support for a political system is policy outcomes, namely the economy, and that people care less about the quality of democratic systems which reach these outcomes.

Economic interventions combined both of these factors: they were a cause and consequence of the severity of the economic situation and limited the range of policy responses available at the domestic level. No matter which was the most important, we would observe a decline in political support following interventions, and so separating the effects is difficult.

In a new paper, I use survey data from the European Election Studies conducted in 2009 and 2014 and a case study of Portugal in 2012 to begin to address this puzzle. I examine whether those who attribute relatively more responsibility for the economic situation to either the European Union, the IMF or their domestic governments are less satisfied with democracy or trusting of their country’s Parliament. If the argument is that people care about their government not being in control of policy – i.e responsible for it – we would expect those that attribute more responsibility to the international institutions to be less satisfied and less trusting. At the same time, I include perceptions of economic performance (both expected and experienced) to see which has the strongest effect.

The analysis demonstrates that perceived economic performance matters most (meanwhile, actual economic performance is not a significant predictor). There is no evidence that where people put the credit (or blame) for economic policy leads to reduced democratic satisfaction or political trust. On the contrary, those in countries worst hit by the economic crisis and who experienced interventions became more satisfied with democracy and trusting of their Parliament if they saw the EU or IMF as more responsible.

In some ways, this is problematic from a normative perspective. Even in situations in which policy is almost entirely removed from domestic contestation and the domestic government has limited room to manoeuvre, people do not seem to reflect this in their support for political institutions – and still punish their domestic governments at election time for the negative outcomes. This may be surprising, but other research shows that the interventions actually reduced austerity protests in those countries.

In 2018, UN Secretary-General Antonio Guterres dedicated his speech to the General Assembly to what he called the ‘trust deficit disorder’. Many political elites, commentators and researchers alike are concerned about the effect of a loss of trust and satisfaction on how politics is conducted. Some of the solutions to this have been to reinvigorate democracy by providing more avenues for popular control, such as citizen’s assemblies.

But this research, consistent with others, suggests that we are in a more tricky dilemma: the route to more trust is by improving policy output. Whilst reforming our democratic institutions may also help to do this, our focus could instead be shifted to improving and securing people’s welfare before we begin a reconfiguration of our political institutions. This is especially true when the political climate may not be conducive to inclusive institutions.

Daniel Devine is a PhD researcher in Politics at the University of Southampton, and a Research Fellow on the TrustGov Project. He studies political attitudes, European and British politics, and voting behaviour. His personal website is here and he can be found on Twitter at @DanJDevine.

This entry was posted in Democracy, Euro, Portugal and tagged democratic deficit, Eurocrisis, Eurozone, Southern Europe. Bookmark the permalink.
We use cookies on this site to understand how you use our content, and to give you the best browsing experience. To accept cookies, click continue. To find out more about cookies and change your preferences, visit our Cookie Policy.