The US attack on Germany’s Economic Policy: A Crisis of World Leadership

Posted on November 22, 2013 by Eurocrisis in the Press 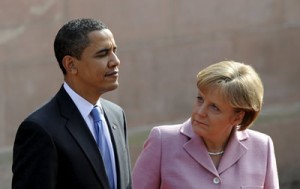 It is a war of words between the United States and Germany. Or maybe not. Certainly the latest US Treasury report on the international economic situation has stirred emotions, both because of the sharp language used in attacking Germany’s growth model, which is allegedly pushing the Eurozone into deflation, and because of the implicit confession that the US recovery is not as strong as previously thought. First it was the “datagate”, then the wiretapping on Angela Merkel, finally the spat on the economy: relations between Washington and Berlin have not been so tense for decades. The reasons however may be deeper than one might imagine.

The US are attacking Germany on the point of macroeconomic imbalances in the Eurozone. Under more normal circumstances, this would simply be a news story. In the post-Lehman Brothers world, however, it may represent something else. The US Treasury highlights how the prospected economic growth in the Eurozone will be entirely based on domestic demand and German exports. In order to sustain itself, Washington explains, Berlin is exploiting its competitive advantage to the detriment of Eurozone’s periphery. That is true, but is this not the same growth model that has been in use for the past 13 years? Why are these critical remarks made only now? Indeed, specific norms exist to avoid that a country may have a current account surplus larger than 6% of GDP on a three-year median value, but it is not Germany’s fault if the preconditions for such an unbalance have risen. Labour market reforms in Germany have been launched well before the European crisis broke out. Other member states, however, have not followed the same path and that, if one really wants to find a culprit of Germany’s performance, is the fault of Brussels, not of Berlin. Trying to keep under the same roof, namely the European common market, countries with evident imbalances in their current accounts deriving not only from different economic structures but from diverging ones has revealed itself a more complicated task than previously imagined. However, this is not a problem of the euro, or of Germany. It is a problem of the mentality and of the original euro project. Indeed, it has been known for long that Germany is the engine of Europe and why this is the case. Companies in the Eurozone depend on Berlin as much as Berlin depends on the Eurozone. One cannot break this circle. Not now, considering the precarious situation in which the European economy finds itself. Precisely for this reason the European approach to the crisis has been the opposite of the one in the US: fiscal consolidation first, growth afterwards. And in any case, the economy’s structures in the US and the EU are very different and using the same model would have been impossible.

The reason for the US Treasury burst has to be sought somewhere else. It would be a mistake to think that Washington is afraid of Berlin. Actually, Washington is afraid of itself. It is afraid of a domestic recovery which looks increasingly addicted to the FED’s quantitative easing measures, whose QE programme purchases US Treasury Bonds and Mortgage-Backed-Securities (MBS) for $85 billion per month. Washington fears that Europe may no longer be able to do what it has done in the last decades, namely to buy goods and services from the US. Indeed, after a drop in domestic demand in several economies, from Italy to France, from Spain to Ireland, now a drop in external demand is becoming apparent. This phenomenon has been noticed by Dirk Schumacher, a Goldman Sachs analyst, who has warned European policy-makers about what may happen once QE-generated liquidity will be withdrawn, the impact of which will be relevant for the Eurozone as well. And if demand in the Eurozone shrinks, either because of austerity policies or because of the QE withdrawal, negative consequences will certainly affect the US too.

Despite an improvement of the conjuncture, the US economy has several weaknesses. Only the exceptional regime of super-liquidity by the FED has helped avoid the worse. This result can be clearly read in the data provided by the FED itself, whose balance sheet has risen from $800 billion in 2007 to over $3,700 billion today. All these extraordinary measures had a double goal: to support domestic demand and to make financial markets thaw. This operation has been only half successful, given that, as recalled by the FED chairman Ban Bernanke, the real economy remains weak. And it is not that important that the S&P 500, Dow Jones and Nasdaq, Wall Street’s main indexes, are at their historical maximum. This is actually the product of the regime introduced by the FED by means of three consecutive rounds of QE easing. James Bullard, the FED St. Louis chief executive, has recently remarked that some economic sectors in the US may be experiencing a bubble as a result of the QE, and stated that “We are monitoring the prices of several assets, and although there is no evidence, there are risks”. Sectors under observation are two: real estate and high tech. But what is important is something else.

The macroeconomic imbalances created by the US central bank after the Lehman Brothers’ bankruptcy are much deeper than those created by Germany. The decision about the QE tapering, possibly postponed to the first quarter of 2014, will impact not only the Eurozone, but the entire global economy. The FED “dope” which has supported financial markets during the gloomiest period of the last twenty years may be remembered as one of the darkest pages of that institution’s history. According to the Global Financial Stability Report (GFSR) published by the International Monetary Fund (IMF), once QE will start to be withdrawn, potential losses on obligation portfolios may reach the $2,300 billion mark. This is because an end of QE would induce a 1% average rise of in government-issued bonds worldwide, which would cause losses up to 5.6% on global obligation portfolios. Far greater imbalances than those induced by Germany.

The US leadership is in clear decline. This phenomenon has been becoming obvious for a number of years, but in terms of the economic-financial profile the turning point has been perhaps the last G20 meeting in Saint Petersburg, during which the clash between the US and the BRICS was evident. Brazil, Russia, India, China and South Africa have openly attacked the US, guilty, according to their judgment, of having introduced too much liquidity in the financial markets. And that is true. The BRICS, in order to counter this monster that the US have been forced to create, have now established a fund in foreign reserves with a $100 billion in order to use it on the forex once the withdrawal of the QE will be started. Again, are these imbalances not much more relevant than those produced by Germany, together with the tacit approval of the EU Commission and the member states with the Eurozone? In order to understand this question it is probably necessary to ask another question first.

Are the US the same as in the past? Very simply, no. If it is true that the Eurozone is flirting with deflation, it is also true that the ECB is carefully watching out to avoid the recession becoming a stagnation which, in theory, may create even more damage. The US Treasury’s words therefore must be contextualised. Washington is becoming aware that its international power has been in decline for twenty years. […]

The “new world” will not be America-centred. The change in the global leadership, both economic and financial has already started, but nobody knows when it will be over. The Pew Research Center has highlighted this trend, underscoring how the majority of interviewees today (54%, they were 42% in 2008) think that in twenty years China will replace the US as world leader. According to George Magnus, one of the most brilliant economists of the UBS bank, this transition will be completed by 2050. According to Stephen King, chief economist at HSBC, by 2040. Instead of one single large macroeconomic area able to drag the global economy there will be smaller economic areas, more fragmented, which will contribute to change growth factors. Consequently, political relations among states will also change. From the intellectual monopoly of the US, whose growth model has been exported, with some modifications, to the emerging economies, there will be a shift to a new benchmark.

These are perhaps America’s last breaths as world leader. Its economic weakness has been impacting its international political position. And vice versa. But becoming aware of one’s own weakness is difficult, and even more leaving the stage to new leaders. As a result, the attack on German economic policies sounds more like a swan song rather than a warning to European policy makers.

The post was originally published in Italian by Linkiesta, English translation by Roberto Orsi .

9 Responses to The US attack on Germany’s Economic Policy: A Crisis of World Leadership