Punishment of mainstream national parties, not Euroscepticism, is behind Irish results 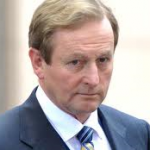 The outcome of the European elections in Ireland reflected those across much of Europe — losses for the traditional establishment parties, gains for populist, Eurosceptic and anti-austerity candidates. However, in addition to the resentment of austerity measures and democratic deficit felt across many EU states, internal historical and political circumstances have also contributed to these results.

Until the financial crisis of 2008, Irish voters and representatives were largely positive about the European project. Economically, Ireland has been one of the biggest per-capita beneficiaries of the EU, and structural funds for transport, the Common Agricultural Policy and open trade and travel enabled the country to become a successful, modern and open economy. Culturally and politically, alignment with Brussels was seen by many as welcome confirmation of true independence from London. However, a sense of unease about a loss of power to Europe has grown slowly over the past decade — the Lisbon and Nice treaties were both initially rejected in referenda before being passed at the second time of asking, and the austerity conditions imposed in the wake of the bank bailout in 2010 were viewed as punitive, especially considering the relatively compliant attitude of the Irish public and politicians, compared, for example, to those in Greece.

The only party with a tradition of Euroscepticism in Ireland is Sinn Féin, which began (as a modern party) as the political representation of the IRA during the troubles in Northern Ireland. Currently in government with Unionists in Belfast, the party has begun to make inroads south of the border in Dublin. Their gains came partly at the expense of Fianna Fáil, one of two centrist parties (the other being Fine Gael) who represented opposing sides of the civil war that followed Irish independence in 1922, and who have dominated government ever since. The other victim of Sinn Féin’s success was Labour, a centre-left party who have suffered the same fate as many junior coalition partners in austerity governments across Europe.

Fine Gael, the majority party in the current government, and the party of the Prime Minister Enda Kenny, saw their support remain relatively stable. They retained four seats, despite being responsible for the implementation of austerity measures since 2012. Fianna Fáil’s representation dropped from three seats to one (though partly as a result of a reduction in the number of constituencies), while Labour were wiped out, losing all three representatives.

Sinn Féin, who had no representatives from the Republic of Ireland in the previous parliament, won three seats. The remaining three seats went to independent (non-party) candidates from across the political spectrum: Luke Flanagan, a moderate Eurosceptic who gained election to the Irish parliament on a platform of cannabis legalization and the rights of local turf-cutters, Marian Harkin, an MEP since 2004 who focuses mainly on local community and social issues, and Nessa Childers, a former Labour member who left the party after disagreements about its continuing support of cuts to social services in the austerity government. The independent candidates combined actually achieved a larger percentage of first-preference votes than any of the parties — 25.7%. Fianna Fáil and Fine Gael both won the same percentage of votes, 22.3%, with Sinn Féin on 19.5%. Turnout was 51.6%, down 7 points from the 2009 elections, but still well above the EU-wide average of 43%. 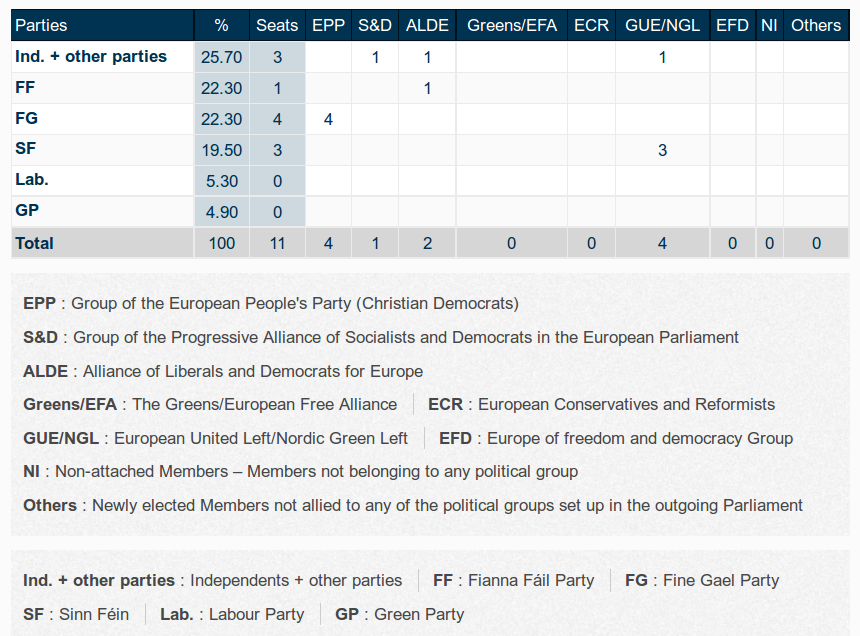 This story seems familiar: populist, localist and anti-austerity gains at the expense of mainstream centrist parties. The difference in Ireland is that the electorate has not previously been particularly responsive to Eurosceptic or isolationist rhetoric: there is no anti-immigration representation in Ireland, and the only party to campaign against the Lisbon treaty, Libertas, sank without a trace after failing to win a single seat in the 2009 European parliament elections. However, increased EU integration in the wake of the relatively unpopular Nice and Lisbon treaties was swiftly followed by economic disaster rather than the continuing prosperity the electorate were promised, and while the European bailout was accepted by the public — a referendum approving the EU Fiscal Compact passed with a 60% yes vote —  the perceived lack of accountability of bankers and large bondholders has weakened enthusiasm for the EU’s economic influence.

Also, Irish internal politics is in flux: the two historically largest parties are ideologically inseparable anachronisms from a century-old conflict, and a slow but inevitable shift to more traditional left-right alignments seems to be under way. How this will play out is difficult to predict. The proportional representation voting system almost always leads to a coalition government. Since the civil war of 1922 Fianna Fáil and Fine Gael have been the major government and opposition parties, but both parties are losing the support of younger voters, and could conceivably be forced to a centre-right coalition in the future. Sinn Féin’s platform of anti-austerity socialism makes coalition with Labour seem possible, but their past association with violence and a lack of experience in the practical business of governance south of the border will make it difficult for them to convince many voters (and indeed potential coalition partners). It will take time, but it is probably a matter of when, rather than if, this repositioning of coalitions occurs.

Fundamentally, support for the EU is sound in Ireland — a strong majority of Irish people consider themselves to be citizens of the EU. Although damaged by the economic crisis, support should remain strong if there is a reasonable economic recovery. The sense of democratic deficit must be addressed, although some take the attitude that nobody in Brussels could possibly do a worse job than recent Irish governments. Indeed, punishment of the mainstream national parties for economic mismanagement and austerity is probably single biggest factor in the Irish results — and it is this, rather than euroscepticism, which is the most likely driving force behind Sinn Féin’s surge in support. If the economic and political issues are managed, there will be less support for a eurosceptic message in future Irish elections.

Dr. Paul Nulty is a research officer working on the QUANTESS (Quantitative Analysis of Textual Data for Social Sciences) project at the Department of Methodology at LSE. His main research focus is the development and application of methods to analyse natural language text for applications in political and social science. He is from Ireland and holds a PhD in Computational Linguistics from University College Dublin.

The European Elections in Germany: Satire and Concerns over the European Project

This entry was posted in European elections, Euroscepticism, Ireland, Uncategorized and tagged austerity, democratic deficit, European Elections 2014, European Parliament, Irish politics, Sinn Féin. Bookmark the permalink.
We use cookies on this site to understand how you use our content, and to give you the best browsing experience. To accept cookies, click continue. To find out more about cookies and change your preferences, visit our Cookie Policy.