The Greek debt crisis that erupted in 2010 is back, and again threatens the stability of the Eurozone. That crisis was the result of two factors. First, an unbridled spending drift of both the private and the public sectors in Greece during the boom years of 2000-2010, which led to unsustainable large levels of debt. Second, reckless lending to Greece by Northern Eurozone banks. At no time the Northern bankers asked themselves the question of whether the Greeks would repay the loans. 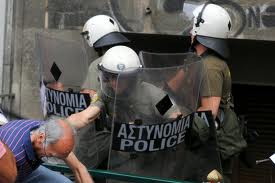 saving the Northern banks. A punitive austerity programme was imposed on Greece, whose effects are now visible everywhere in this country. A decline in GDP of close to 25 per cent since 2010, a rise in unemployment to a level we have not seen since the 1930s, and impoverishment of large parts of the Greek population.

The banks went largely unpunished. True there was a debt restructuring of the Greek debt held by private investors. Some banks paid the price of excessive credit granted to Greece, but most banks escaped this fate by dumping their Greek claims onto the public sector. Those claims are now in the hands of national governments and the European Central Bank. And these want to have their money back whatever the consequences may be for the Greek people and the Greek political system.

The official narrative of this approach is that the intense austerity that was imposed on the Greek population is inevitable and in the end will bear fruit. Inevitable? Yes, of course, if the intention is to safeguard the interests of the creditors then there is indeed only one possibility: the Greeks have to pay the full price. Will it pay off in the end? Yes, of course if austerity is maintained long enough it will succeed in creating surpluses and transfers of resources from Greece towards the rich North of the Eurozone.

This narrative, however, loses sight of the political upheavals triggered by the human misery that results from intense austerity. The millions of people who are pushed into misery by the creditors from the North of Europe are not passive subjects. They not only protest in the streets, something the creditors can easily live with. They also vote for those political parties that promise them that there is a better way to deal with the problem. And these are the parties that are out to break the established political and social order.

It is appalling to see that the European political elite has been living in a cocoon, failing to take into account the political and social implications of the intense austerity programmes they imposed in countries like Greece (but also in other countries of the periphery). This political elite still has not learned the lessons. The first reaction of the German minister of finance after the announcement of new elections in Greece was that the discipline needed to be continued rigorously.

What is to be done? Much will depend on the election results in Greece. The far-left party, Syriza, seeks to weaken the intensity of the austerity programmes and to negotiate a debt restructuring with the European authorities.

It is quite surprising to find out that these demands, in fact, are based on a correct analysis of the Greek problem. Despite the austerity, that has been extraordinarily intense, the Greek public debt has increased and now exceeds 170 per cent of GDP. The burden of this debt is so high that future Greek governments will not be able to continue to service it.

Instead of denying this reality the EU finance ministers should start facing it. They should begin to think about how they can ease the debt burden of Greece. Denying this reality condemns Greece to many more years of misery and will encourage extremist political movements in the country even further.

The risk today is that the political leaders of the Eurozone refuse to relieve the Greek debt (and that of other countries of the periphery). In that case, a fundamental crisis in the Eurozone is inevitable. Even if Syriza does not make it at the coming election, extremist parties will gain the upper hand in future elections. This will be very disruptive for the Eurozone as a whole.

History teaches us that after a debt crisis a balance must be found between the interests of creditors and debtors. The unilateral approach that has been taken in the Eurozone in which the debtors have been forced to bear the full weight of the adjustment almost always leads to a revolt of these debtors. That is now underway in Greece. It can only be stopped if creditors dare to face this reality.

‘The Future has just started’: The Greek National Elections and the end of Austerity in Europe

This entry was posted in Greece and tagged austerity, SYRIZA. Bookmark the permalink.