Euroradio: from Warsaw for Belarus

It’s a rainy Saturday afternoon in December 2015 and many cars sporting Belarusian number plates are maneuvering their way in and out of the parking lot of Centrum Handlowy Marki, a shopping centre on the eastern outskirts of Warsaw. As there are only 200 kilometres separating the Polish capital from the border with Belarus this is hardly a surprising sight. The distance between Warsaw and Minsk is less than the one between the Polish capital and Berlin.

Both Poland and Belarus held presidential elections last year. In May 2015 Polish voters chose the then underdog candidate, Andrzej Duda, instead of backing the president in office, Bronisław Komorowski (an outcome confirmed by the following parliamentary elections). In October last year Belarusians voted en masse for their president running for his fifth term. Alexander Lukashenko has now been leading Belarus for twenty-one years in a row, winning the latest elections with a staggering 83.47% of the vote. 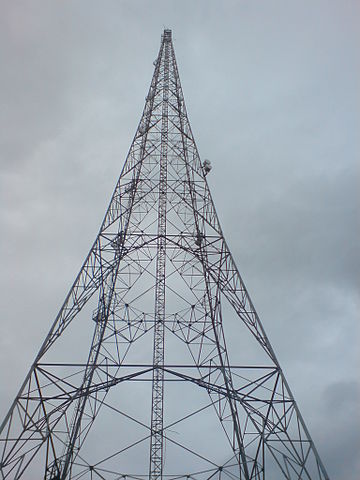 To the casual observer such a landslide victory may suggest that Belarus is a stable and united country, but in fact part of Lukashenko’s success lies in controlling the national media. So much so that today only the friendly voices of State-approved televisions, radios and newspapers can be read and heard in Belarus, with the only exceptions being a few independent websites and online newspapers.

No surprise then that neighbouring Poland hosts many independent Belarusian media organisations backed by international subjects and targeting the 9.5 million people living in Belarus as their main audience. A list of Belarusian ‘non-State’ media broadcasting from Poland includes the satellite television channel Belsat TV, the website of the Charter 97 organisation as well as radio stations such as Białystok based Radio Racyja and Warsaw based Eŭrapéjskaje Rádyjo dla Biełarúsi (European Radio for Belarus).

The importance of being impartial

Since 2006 the European Radio for Belarus, better known as Euroradio inside Belarus, broadcasts in Belarusian from the Polish capital. The headquarters of the radio station are located on the first floor of a grey, inconspicuous building along Puławska Street, in the district of Mokotów.

Call it secrecy, call it modesty, but there’s no way to know about Euroradio from the outside as no placard or logo is anywhere to be seen. I need to get into the building, ring a bell, push an iron gate aside and walk up a flight of stairs to meet up with Dzimitry Novikau. He’s President of the Board of Euroradio and one of its original founders from September 2005 (broadcasts started in February 2006).

Around twenty people in Warsaw – including technicians, hosts and coordinators – put Euroradio together. It relies on the help and reporting skills of ten Belarusian journalists who work from an office established in Minsk six years ago. “Why did we set up this radio station in Warsaw? Because Poland is a democratic and independent country, although with a socialist past, sharing a border with Belarus and all this makes it a perfect place” Dzimitry explains.

Euroradio gives voice and music to a Belarus critical of president Alexander Lukashenko even though, as Dzimitry makes clear, “our mission is to broadcast reliable and impartial news on our country and the world to Belarusian citizens without doing any propaganda.”

People in Belarus can listen to Euroradio online, via satellite and on FM thanks to the collaboration with some Eastern European radio stations. The radio is aimed mainly at young listeners between 15 and 35 years old, broadcasts a mix of music and information and has a website in Belarusian and Russian with some key content translated into English.

The story leading to the creation of Euroradio begins twenty years ago in Minsk. It was in 1995 that a group of professional journalists opened Radio 101.2, a radio station aimed at young listeners and broadcasting news, music and entertainment shows. As Dzimitry recounts “101.2 soon became very popular, but it was closed in ’96 by order of president Lukashenko.” It was for this reason that the founders of Radio 101.2, including Dzimitry, decided to create a Belarusian radio abroad, moving to Poland and opening Radio Racyja in 1998. Racyja used to broadcast news in short and medium wave and still does so online and FM today.

“Thanks to this former experience, founding a new radio in Poland in 2005 was a natural step for us” Dzimitry says, adding that “the reason I decided to create Euroradio was that I wanted to focus on young listeners by adding music to the news, a format that wasn’t possible back then at Radio Racyja.”

Euroradio is backed financially by a number of institutions and NGOs, including the European Commission. Dzimitry prefers not to mention anyone in particular, but stresses “we’re not a project of the Polish government nor of some international subject. We’re a radio station made by Belarusian people for Belarusian people and we get financial, political or legal support from several sources.”

International backers coming from the Netherlands, the Czech Republic, Lithuania, the UK, Canada, the US, and Poland. Euroradio is run by a limited liability company whose creation was necessary to get a Polish broadcasting license. However, the charter of the radio station states that the company has to stay non-profit with any revenue to be reinvested into the development of Euroradio itself.

Reporting for and from Belarus

Working at the computer in the room next door to Dzimitry’s is Hanna Borowska. She’s a Belarusian journalist who came to Warsaw in 2006 to study Political Sciences at the university and joined Euroradio two years later. At first she worked as a journalist, then as a host and is now the person in charge of informative programmes. “Some of the people collaborating for Euroradio here in Warsaw haven’t worked as journalists before and many of them are university students” she explains.

The role played by information is crucial for Euroradio. Every day from 7am to 10pm and three times per hour the radio broadcasts brief news bulletins on Belarusian as well as international events. When it comes to in-depth information, the flagship programmes of the radio station are three: Eurozoom, Petard and Cardiogram.

“Eurozoom is about Belarus and Belarusian news as seen in a European context. Petard talks to the Belarusian people about the five main topics of the day. Cardiogram is a program focusing on human rights and their violation in some areas of rural Belarus. We want to let our listeners know that life in small towns and the countryside is very different from Minsk and it’s hard for those living there fighting for their rights” Hanna tells me.

These three programmes are all broadcast from Warsaw, but Cardiogram relies chiefly on the interviews and reportages made in Belarus by the Belarusian journalists legally working for Euroradio in the country. Those who live in Belarus and cannot listen to these programmes online or via satellite can find them on FM. As Hanna says “we collaborate with Lithuanian and Ukrainian radio stations whose frequencies cover parts of Belarus. They broadcast Eurozoom, Petard and Cardiogram for up to two hours every day.”

Three doors down from Hanna’s office, I’m introduced to Slava Koran. He’s a well-known rocker in Belarus with his band, Ulis (from ‘Ulysses’ by James Joyce), and the person in charge of the music within Euroradio since its inception. Slava creates the music playlists and selects the songs to be broadcast. It’s an important task given the special role played by music in Euroradio’s schedule.

“We welcome rock music in many of its variations, from indie to alternative passing through industrial, plus some pop. The important thing is that the songs relay human energy,” he says.

According to Slava, only 10% of the songs broadcast come from Belarusian artists, much room is given to Anglophone or Eastern European bands “as long as they sing in their native language because it’s important for our listeners to recognise where the music comes from”.

Just as in the 1980s, when more people in favour of national independence went to rock concerts than to political rallies, rock is the favourite music of young Belarusians. Under Lukashenko’s rule this music genre is still a symbol as well as a carrier of protest.

“Every time I played in Belarus with my band over the last few years I have had to show someone the lyrics of our songs beforehand. And they often forbid us to play” Slava says.

Perhaps this is the main reason why today the lyrics of Belarusian rock bands are apparently more philosophical than political even though, theoretically, there’s no censorship in Belarus. As Slava points out “the only ones who dislike rock music in Belarus are government officials because they would like artists to be loyal to the status quo. But rock music expresses human emotions and, as such, cannot be encased within loyalty for a political system.”

Euroradio gives airplay to human emotion and brings it live on stage by organising events like the music festival Be Free that used to take place in Ukraine. The most popular ongoing event is held in Minsk each year, called Dajom rady (We will make it) and includes awards given to Belarusian artists chosen by Euroradio’s listeners. The success of Dajom rady among crowds of young Belarusians shows how, despite the difficulties and the restrictions brought by Lukashenko, Euroradio’s main goal hasn’t changed.

“We want to go back to Belarus and broadcast from there. We are Belarusians, working for a Belarusian audience and broadcasting in the Belarusian language” Dzimitry says “Our fellow countrymen who listen to the radio from Europe live in democratic countries, but we focus on the Belarusians living in Belarus who’re not as lucky as their compatriots abroad.”

This piece originally appeared in openDemocracy‘s Can Europe Make it series.

Lorenzo Berardi is an Italian freelance journalist living in Poland. He has worked as a UK correspondent for the Italian newspaper Lettera43 and has also reported for Italian, Norwegian and Dutch radio stations. From and about Poland he writes for the V4 Revue and The Varsovian as well as for Lettera43 and Polonicult. His focus is on politics, economics, environmental issues, Polish literature and culture. Follow him on twitter @LorenzoBerardi.

A black cloud over the EU?