The Manifesto Everyone Hates to Love 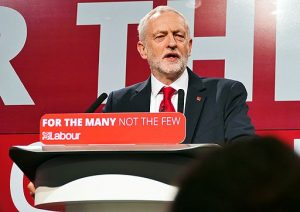 Polls are now giving the General Election a renewed interest: Labour has significantly reduced the Conservative lead, making the final result uncertain. But it’s another poll that truly summarises politics in 2017. A ComRes poll found that a majority of voters support or agree with policies proposed in the Labour manifesto, while at the same time finding that 56% of the same people said that Corbyn “would be a disaster as a Prime Minister”, the very person that introduced these policies in the party’s manifesto. Fingers might point to Corbyn’s leadership to explain Labour’s electoral woes, but for the party the source of the problems run much deeper, and this is evident in its manifesto.

This where the UK is at the moment: housing crisis, tax-avoidance in the financial sector, a Higher Education that is becoming prohibitively expensive. These are problems that are affecting the lives of millions for the worse and they have been left unaddressed for way too long. These areas of policy that social democratic parties like Labour have always considered the areas of political debate that are most favourable to them.

Labour’s manifesto is precisely an effort of the party to go back to these topics of debate, draw on its radical traditions and propose new policies, more to the left of the spectrum in the hope that it will regain its support amongst Britain’s poorest. It’s a reasonable strategy for a party of the centre-left. At a time where most people with low and median incomes are finding it harder and harder to pay rent and mortgage installments, focusing on housing should be a no-brainer. An economy in which citizens are forced to give away a significant part of their income for rent or mortgage payments, is an economy deprived of dynamism; as more and more income is swallowed by housing costs less of it ends up in job-creating consumption. The UK has the sad privilege of offering young people some of the most expensive Higher Education programs in Europe, in a period where youth employment is becoming more scarce, worse paid and more precarious. Free public education like the one which most European countries provide their students with seems a much more viable option than the alternative; piling up on enormous amounts of very risky student debt that burdens the lives of young people and public finances – student loans left unpaid and potential future bankruptcies are likely to end up being covered by the public budget through some form of bank-bailout.

Why then aren’t the majority of people affected by the housing crisis and increased education costs rallying around Labour in order to give it a chance to implement these policies?

Going after the side-effects but not the cause

If we look at the policies in detail we will realize that the manifesto is rife with unanswered questions that limit the enthusiasm one can have about this manifesto. Take the housing policies as presented in the manifesto for example. The promise is to build 100,000 new  social and council houses. One would have to be pretty blind to not see the ardent need for such a measure. Critics will always raise the same question: “how will you finance this”? Unlike the first post-WWII Governments, a potential Labour government will not be dealing with a robust industrial economy in almost full employment and strong tax revenues. The UK is now a financialised economy, with the City being badly over-expanded and the size of the banking sector of the UK arriving at 450% of the country’s GDP in 2013.

This is a problem for many reasons. First and foremost if Labour’s housing policies were effective in providing a sustainable and significant drop in the average house price -despite that within the manifesto important factors that are inflating house prices such as the influx of foreign investment in the property market are left unaddressed- the health of the UK financial sector would be put at risk. It’s absolutely not an accident that a sudden price drop features in Bank of England’s stress tests. Mortgages, to which UK banks are heavily exposed, would become significantly more risky and banks’ stocks would suffer a drop in demand if prices in the UK housing market were to fall. The decreased lending coming from the banks as a result and the prospect of new bank-bailout would have negative effects for the UK economy and most definitely would lead to a drop in GDP growth. If the UK government signalled that it was willing to take all measures necessary to keep housing prices steadily low in a sustainable level the allure of London as a financial centre would be damaged; the housing market and access to assets are crucial for the profitability of financial investment and are prerequisites for the rise of global financial centers.

There is another obvious problem with the Labour manifesto. In financialised economies Governments find it harder and harder to tax capital; financial capital is not tied down to assets, has access to numerous tax-havens and enjoys a variety of freedoms and favourable regulations that the UK government has accepted as part of its membership to the the World Trade Organisation, the Basel convention and the EU.

This should be a big headache for Labour given that its manifesto proposes as its main source of funding taxing large accumulations of wealth and reducing the significant levels of tax avoidance seen currently. Increasing national insurance contributions and income taxes or increasing the business tax rate are all measures that effectively mean that Labour will try to force Britain’s 1%, most dominant companies and investors to contribute more to the tax burden. Labour is trying -simply put- to tax the rich.

But Labour is suspiciously silent about tax-havens, international treaties that allow capital to move freely and specifically about how exactly it plans to pressure financial capital and large companies into contributing more in the public purse, something that has never been achieved in a financialised economy before. The silence on such key issues would make most voters suspicious and one doesn’t need to be a financial expert to see the hole in Labour’s plans..

Any form of UK government measures against tax havens will most likely put the UK in a collision course with all its main trade and investment partners across the Globe and the many foreign governments that actively support those tax havens. No government in Europe has yet to try such a bold measure.

But even if the legal and political problems were to be overcome, the fact remains that the  UK economy remains heavily dependent for growth on the financial sector; these companies and financial investors enjoy huge amount of leverage towards any future UK government. If they were to be forced to reduce their profits significantly chances are that they would move financial investment to another host-country and plunge the UK into a recession.

The dilemmas that any government trying to mitigate the effects of financialisation will face have no obvious or painless solution. These policy problems cannot be solved by changing the person at the helm; they are the outcomes of the financialised economic model and to this day no alternative model has been put forward to replace it completely.

Alexandros Alexandropoulos is a Visiting Academic at the LSE and a researcher at the European Research Network on Social and Economic Policy (ERENSEP). He has taught at SciencesPo Paris and was a Policy Expert for the Hansard Society.

1 Response to The Manifesto Everyone Hates to Love