Convention against Torture May 4th, 2016 Richard 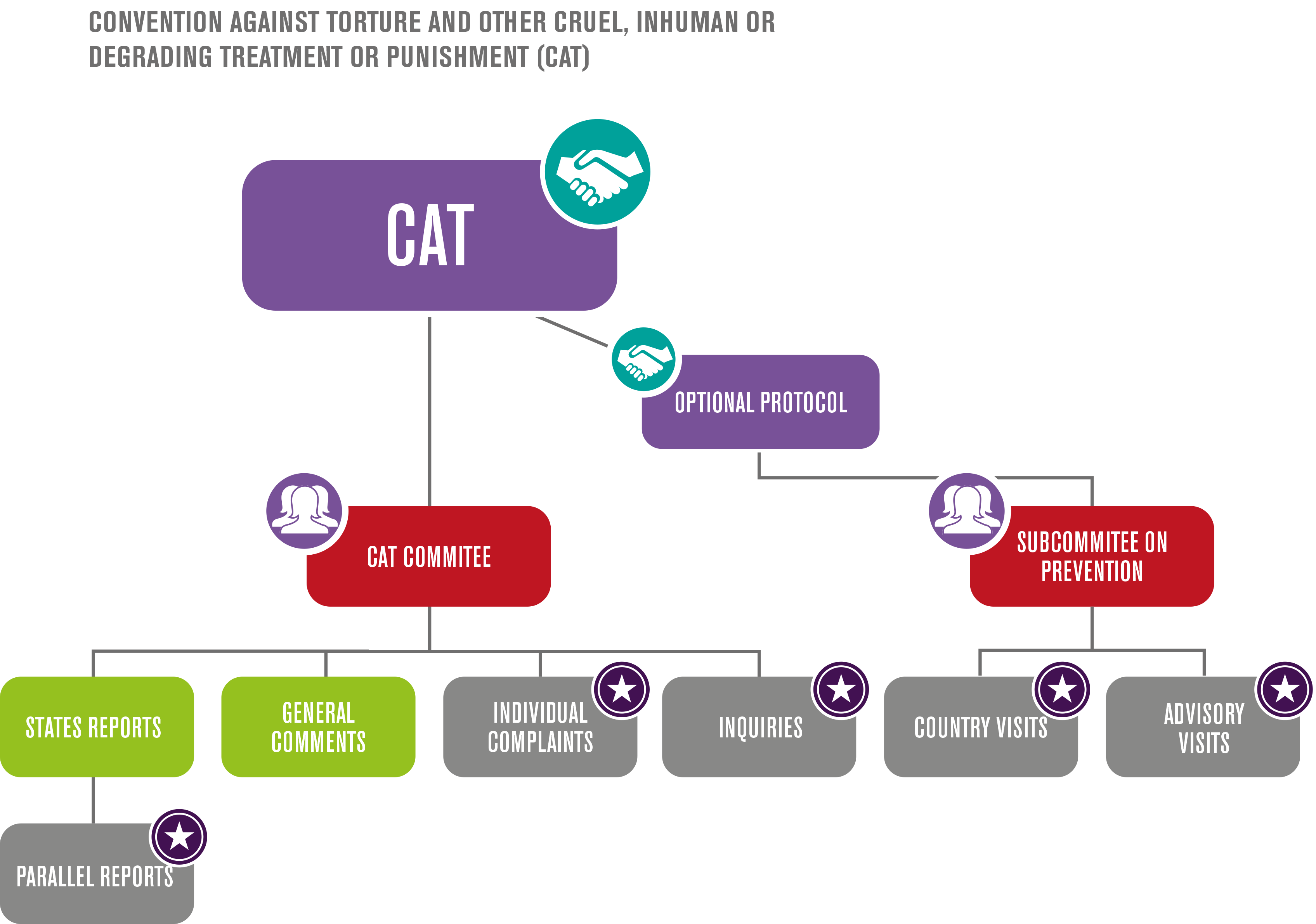 Treaty: Convention against Torture and Other Cruel, Inhuman or Degrading Treatment or Punishment (CAT)

States must report: Within one year of ratification, then every four  years

Has your state ratified it? CAT  |  OPCAT

Convention against Torture and Other Cruel, Inhuman or Degrading Treatment or Punishment (CAT)

The Convention against Torture and Other Cruel, Inhuman or Degrading Treatment or Punishment (CAT) was adopted by the United Nations General Assembly (Resolution 39/46) on 10th December 1984. The Convention requires states to take effective measures to prevent and investigate torture in any territory under their jurisdiction, and forbids states to transport persons to any country “where there are substantial grounds for believing that they would be in danger of being subjected to torture.” Under Article 2: “No exceptional circumstances whatsoever, whether a state of war or a threat of war, internal political instability or any other public emergency, may be invoked as a justification of torture.”

The United Nations Special Rapporteur on Torture and the Committee Against Torture have both acknowledged the devastating impact of VAW and argued for its inclusion into the anti-torture framework. They, along with others, have consistently recognised the reaction of VAW survivors mirrors the responses of survivors of torture and cruel, inhuman or degrading treatment or punishment. Powerlessness, post-traumatic stress disorder and physical deformity are just a few of the outcomes which the two groups share. Viewing VAW through this lens expands the definition of torture to include women’s experiences and is an important step in acknowledging the severity of these crimes. This recognition of VAW as a form of torture and discrimination persists irrespective of the situation in which the violence takes place – whether in armed conflict or peacetime, in the home, the street or in places of detention – or the identity of the perpetrator – whether a family member, member of the community, stranger or state official.

In its General Comments, the CAT has discussed gender-based violence and state responsibility to eliminate it:

General Comment No. 2: Implementation of article 2 by states parties

18. The Committee has made clear that where State authorities or others acting in official capacity or under colour of law, know or have reasonable grounds to believe that acts of torture or ill-treatment are being committed by non-State officials or private actors and they fail to exercise due diligence to prevent, investigate, prosecute and punish such non-State officials or private actors consistently with the Convention, the State bears responsibility and its officials should be considered as authors, complicit or otherwise responsible under the Convention for consenting to or acquiescing in such impermissible acts… The Committee has applied this principle to States parties’ failure to prevent and protect victims from gender-based violence, such as rape, domestic violence, female genital mutilation, and trafficking.
…
22. State reports frequently lack specific and sufficient information on the implementation of the Convention with respect to women. The Committee emphasizes that gender is a key factor. Being female intersects with other identifying characteristics or status of the person such as race, nationality, religion, sexual orientation, age, immigrant status etc. to determine the ways that women and girls are subject to or at risk of torture or ill-treatment and the consequences thereof. The contexts in which females are at risk include deprivation of liberty, medical treatment, particularly involving reproductive decisions, and violence by private actors in communities and homes…

General comment No. 3: Implementation of Article 14 by states parties

33. Judicial and non-judicial proceedings shall apply gender-sensitive procedures which avoid re-victimization and stigmatization of victims of torture or ill-treatment. With respect to sexual or gender-based violence and access to due process and an impartial judiciary, the Committee emphasizes that in any proceedings, civil or criminal, to determine the victim’s right to redress, including compensation, rules of evidence and procedure in relation to gender-based violence must afford equal weight to the testimony of women and girls, as should be the case for all other victims, and prevent the introduction of discriminatory evidence and harassment of victims and witnesses. The Committee considers that complaints mechanisms and investigations require specific positive measures which take into account gender aspects in order to ensure that victims of abuses such as sexual violence and abuse, rape, marital rape, domestic violence, female genital mutilation and trafficking are able to come forward and seek and obtain redress.

Want more? Browse all of the CAT’s general comments on the OHCHR website

According to the General Reporting Guidelines for CRC, states must include information on VAW in their reports to the Committee. Specifically:

States are obliged to keep under review interrogation rules, instructions, methods and practices as well as arrangements for the custody and treatment of persons subjected to any form of arrest, detention or imprisonment with a view to preventing torture and other cruel, inhuman or degrading treatment or punishment. The report should include information on… Any independent bodies or mechanisms established to inspect prisons and other places of detention and to monitor all forms of violence against men and women, including all forms of sexual violence against both men and women and all forms of inter-prisoner violence, including authorization for international monitoring or NGO inspection
…
Article 16 imposes upon States the obligation to prohibit acts of cruel, inhuman or degrading treatment or punishment. The report should contain information on: …Living conditions in police detention centres and prisons, including those for women and minors, including whether they are kept separate from the rest of the male/adult population… Information on any officers within police forces and prosecutorial or other relevant offices specifically trained to handle cases of alleged torture or cruel, inhuman and degrading treatment or violence against women and ethnic, religious or other minorities…

Optional Protocol to the Convention against Torture and Other Cruel, Inhuman or Degrading Treatment or Punishment (OPCAT)

The Protocol also obliges States to set up independent National Preventive Mechanisms to examine the treatment of people in detention, make recommendations to government authorities to strengthen protection against torture and comment on existing or proposed legislation. The SPT assists and advises the National Preventive Mechanisms about ways to strengthen safeguards relating to detention and reinforce their powers and independence.

Subcommittee on the Prevention of Torture (SPT)

The Subcommittee on Prevention of Torture and other Cruel, Inhuman or Degrading Treatment or Punishment (SPT) is a new kind of treaty body in the United Nations human rights system. It has a preventive mandate focused on an innovative, sustained and proactive approach to the prevention of torture and ill treatment. The SPT is composed of 25 independent and impartial experts coming from different backgrounds and from various regions of the world. Members are elected by States Parties to the OPCAT for a four-year mandate and can be re-elected once.

The SPT is mandated to routinely conduct country visits to ensure states parties have an adequate and sustainable torture prevention framework in place. Prior to this visit, the SPT invites CSOs and other non-state actors to provide information on particular areas of concern within the relevant state. The states subject to country visits are chosen by the SPT through a random selection process to ensure all states parties undergo regular visits.

During the visit, the SPT is able to privately interview persons “deprived of their liberty” (e.g. prisoners, or people detained because of mental health conditions or illnesses) and any other persons who may be able to provide information relevant to their investigation, including Government officials, representatives of national human rights institutions, custodial staff, lawyers, doctors, family members and CSOs. Any individual or group providing information to the SPT will be exempt from any form of sanction or reprisal for having done so. If relevant, the SPT may also conduct an advisory investigation of the states’ progress in establishing its National Preventative Mechanism.

In its discussions with CSOs and other members of civil society, the SPT noted its concern for the general lack of awareness surrounding legislation to establish an NPM. For this reason, it was recommended Benin make efforts to “foster public debate concerning the NPM in order to ensure adherence to the principles – openness, transparency, inclusiveness and independence – in the process of adoption of the legislation and the establishment of the NPM.

During the visit, the SPT also conducted investigations in prisons and noted specific concern for the treatment of women:

According to article 17 of the OPCAT, State parties have an obligation to establish National Preventative Mechanisms (NPM). NPMs are independent national bodies for the prevention of torture and ill treatment at the domestic level. It is the responsibility of each state to ensure that it has in place a NPM which complies with the requirements under the OPCAT.

To oversee the functionings of NPMs, the SPT conducts advisory visits to states parties. Much like the country visits, the SPT conducts these visits through a random selection process, requesting information from CSOs prior to and during the visit. At the conclusion of the visit, the SPT provides recommendations on the establishment of NPMs, including its mandate, powers and methods of working.

For more information on engaging with the UN treaty bodies, see ‘Working with the United Nations Programme: A Handbook for Civil Society’.