Grillo’s ‘threat’ and the Spanish press

The Italian general elections took place ten days ago. The divided results and the relatively unexpected success of Berlusconi’s The People of Freedom Coalition (29.1% of votes) and Beppe Grillo’s Five Star Movement (25.5% of votes) triggered diverse first reactions across the European Press. The media have since followed closely the messages and moves of the main actors involved in this complex political game. Different scenarios have been projected but the uncertainty surrounding the formation of the future government and the possible political pacts remains extremely high.

In Spain, Italian elections have quickly lost salience in the press, overshadowed by the domestic corruption scandals, farewell of the Pope and the death of Hugo Chavez. Nonetheless, there is an interesting phenomenon concerning the coverage of the elections that should not go unnoticed, namely the anxiety about Grillo’s ascent, which seems to have united the otherwise strongly polarised Spanish press. It is indeed quite a novelty to find analyses from newspapers with very different editorial lines coming up with similar conclusions or warnings: that Grillo’s example may inspire the emergence of new or strengthen existing ‘populist’ parties in Spain. 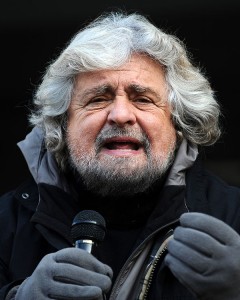 The centre-left newspaper El País talks about a ‘resurgence of populism’ (03/03/2013) linking Grillo’s success to the previous electoral results of Syriza and Golden Dawn in Greece.  Described as expressions of populism, these results are considered to be a reaction against the imposed technocracy and the weaknesses of the ‘old establishment’. In a different article (03/03/2013) the same newspaper goes further by stating that ‘the “virus” of Beppe Grillo is ‘threateaning to infect Europe’.

Grillo’s Five Star Movement is considered as the potential embryo of a wider civil revolution in Europe. The centre-right El Mundo links Grillo’s phenomenon with Greek and other European populist parties, such as the True Finns and Geert Wilders’ Party for Freedom in the Netherlands (05/03/2013). It stresses that finally ‘anti-system’ parties in Southern Europe are finding an electoral ground among voters unsatisfied with the establishment and with weak democratic systems. El Mundo also hints at the danger of populism drifting towards authoritarianism.

The conservative Barcelona-based newspaper La Vanguardia’s article ‘In the hands of Beppe Grillo’ (28/02/2013) attributes his electoral success to his strategy of playing outside the conventional political game and rejecting any engagement, discussion or debate with other political parties.

The progressive Catalan newspaper El Periodico claims that ‘Spain is not Italy (yet)’ (03/03/2013) suggesting that the Five Star Movement in Italy is not so different from the Spanish ‘Indignados’ social movement.

The discourse in the Spanish press reflects concerns about the potential ungovernability of Italy and how this could impact the Spanish economy through a (not clearly defined) contagion effect. Some analyses also emphasise that the Italian elections can be interpreted as a vote of no confidence to the austerity policies ‘imposed’ by the European Union. However, what seems to differentiate the initial reaction of the Spanish press from that of other European countries is the profound mark left by Grillo on the public discourse and imaginary.

True, Grillo was subject to a previous negative media campaign that caricaturised his enterprise. For instance, on 21 February the conservative ABC claimed that populism had taken over the electoral campaign and that Grillo was ‘attacking politicians, journalists and institutions’. The next day, El País suggested that Grillo’s movement was doing ‘anti-politics’ and reminded that he was not in the ballot for a manslaughter conviction as a result of a car accident occurred in 1981.

Not all Spanish analysts perceive Grillo as a threat. Some see him as a potential catalyst for political reforms or as a necessary check to the traditional establishment. But even those more prone to embrace a Grillo-type undertaking in the Spanish political scene, usually on the left of the political spectrum, show signs of unrest due to the great and unexpected consequences a similar movement would have in Spain. For instance, El País’ article ‘Waiting for a Spain’s Beppe Grillo’ (02/03/2013) suggests that a Spanish Grillo could channel public discontent and bring ‘new hope to the hopeless’ and that the iconoclastic stance that he represents is already widespread in Spain. However it also reminds that similar attempts in Spain, such as those by businessmen Ruiz Mateos and Jesús Gil, have never succeeded.

Italy is largely perceived as a sort of mirror into which Spain can see itself. The Euro crisis has shown that both countries share similar structural problems and face equivalent challenges. The Spanish press coverage of the Italian elections reinforces the impression that what happens in Italy may easily also occur in Spain. The weaknesses of the political institutions, coupled with the growing popular unrest, seem to have turned Spain into a fertile ground for new ‘populist’ leaders and movements. It is not clear who these new political actors would be but they could potentially shake the traditional Spanish political game. This uncertainty seems intimidating enough to ‘unite’ Spanish political analysts.

2 Responses to Grillo’s ‘threat’ and the Spanish press