A story that went almost unnoticed in Greek media due to the dramatic developments in Cyprus over the last couple of weeks was the arrival of German football coach Otto Rehhagel in Athens on a diplomatic mission last week. Rehhagel is the coach that led the Greek team to the triumphant conquest of the Euro Cup in 2004 and therefore a much beloved figure among Greeks.  On account of his popularity, Rehhagel was reportedly picked out by Angela Merkel as a good-will ambassador with the mission to reverse the widespread anti-German sentiment of the Greek public. Despite its intentions, the public relations move failed to meet German expectations. Most importantly, it is illustrative of crucial aspects of the relationship between the two countries, Germany and Greece, as well as populist politics involved in the Euro crisis overall. 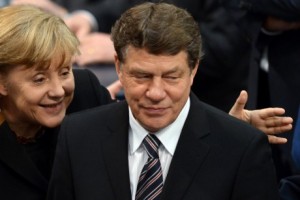 The news about Rehhagel’s diplomatic mission broke on the 13th of March and was received with scepticism. The German PR exercise was seen as irrelevant to the experiences of the Greek people faced with harsh financial problems and disappointment was expressed about Rehhagel’s willingness to get involved into politics. The visit was eventually realised on the symbolic date of 25th of March, a day of national celebrations for Greeks as it marks the anniversary of the War of Independence against the Ottoman Empire in 1821. Rehhagel arrived in Greece as part of a diplomatic envoy led by Hans-Joachim Fuchtel, a deputy Labour Minister and representative of the Chancellor for Greece. Fuchtel is not new to such PR operations, as he has been recruited for a similar one in the past. During its stay in Athens, the German team had meetings with the Greek Ministers of Domestic Affairs and Tourism and local authorities. Fuchtel urged German tourists to visit Greece and Rehhagel coached a junior team of refugee children in a message against racism.

The visit, however, does not seem to have met its goals and overcome the initial criticisms. Rehhagel was described as an instrument of Merkel’s policies and it has been reported that the national football team refused to meet him. The good-will operation was accused in the press and on-line discussion forums both for being hypocritical and smacking of paternalism. It seems that Merkel’s move was both misjudged and untimely.

For once, the severity of the terms of the Cypriot bailout and the perceived role Germany has played in it have reignited, if not strengthened even further, the anti-German public discourse in Greece. Rehhagel has also been known as “King Otto” during the years of his coaching career with the national team in Greece. King Otto was the first king of Greece in the first years of independence from the Ottoman Empire. He was also a Bavarian prince and, after becoming increasingly unpopular due to his compliance to the will of foreign powers, he was deposited in 1862, thirty years after his coronation. As Germany is increasingly seen by Greeks as the new despotic power in Europe, “King Otto” is regaining his previous negative connotations as a symbol of German dominance and political manipulation.

In this context, as a PR gesture, Merkel’s diplomatic decision is perceived more as a patronising political manoeuvre rather than an attempt to a renewal of friendship with the Greeks. The assumption that the popularity of a sports figure can compensate for the public resentment against the austerity measures infantilises the Greek public and implicitly expresses contempt for Greek politics. The language used with regard to Rehhagel’s visit construes it as an act of charity with all the power imbalances between the two countries that this implies. “The visit is aimed at encouraging the Greeks”, a German statement from the Embassy in Athens said. Rehhagel on his arrival expressed his belief that Germany has to “help countries that are down on their luck” decontextualizing the problems that Greece and other European countries face from their structural, political and economic, dimensions and attributing them to “luck”.

Of course, he might be excused for doing so, considering he is a sportsman and not a political figure. But then, the question arises, why should politics be conducted by people that lack the necessary knowledge and expertise but just happen to be otherwise publicly celebrated? As a political move, the choice of Rehhagel as a good-will ambassador supports a politics of spectacle and impressions not very different from the populist politics that have recently become a reason for anxiety in Europe and that Merkel’s own challenger has condemned by dismissing Berlusconi and Grillo as clowns.  The choice, then, to employ a sports figure, a man of spectacle, in order to restore Berlin’s image in Greece can only mean two things: either that the German government is willingly employing populist tactics it otherwise condemns or it believes that this is the only way to conduct politics in Southern Europe.