The impact of the international press in Portugal

As the international press fixes its gaze on Portugal once again, it seems to do so with little awareness of its disproportional impact in that country’s opinion- and policy makers. Portuguese journalists, pundits and politicians closely monitor each reference to the country’s situation. They frequently cite foreign speeches and articles to justify their own interpretations of the crisis in Portugal as well as possible solutions to overcome it. Yet taking international media discourse at face value, using it as incontrovertible analytical basis and central focus of policy, risks dangerously underestimating the full implications of the current situation. 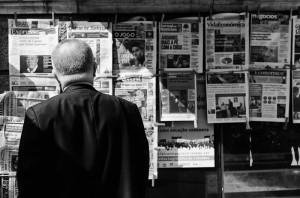 One day after Prime Minister Pedro Passos Coelho announced even more drastic cuts in the fields of health, education, social security and state companies, the online edition of Público, the most prestigious Portuguese newspaper, ran a full story listing excerpts and soundbites from mainstream American, British, French and Spanish news outlets. American Economist Paul Krugman also made the day’s headlines after the state news agency LUSA called attention to a post in his New York Times blog urging the Lisbon government to ‘just say nao’ to more austerity. Opinion columns regularly cite the Financial Times, and every mention of Portugal in the Economist inevitably makes its way into at least one of the multiple talking heads panel shows airing in each of the cable news channels.

The government itself constantly invokes the importance of the country’s depictions abroad, particularly when seeking absolution for policies which have caused the economy to contract, unemployment to rise to a record high, and the budget deficit to widen in stark contrast to governmental aims and predictions. Ministers present the allegedly positive portrayal of Portugal abroad – i.e. the portrayal of a country peacefully and unequivocally adopting a wide range of austerity measures in order to fulfil its commitments to the Troika, in supposed contrast to the turbulent Greek case – as the government’s redeeming success. Conversely, they criticise Portuguese opposition parties, unions, confederations, protesters, the media and, more recently, the Constitutional Court for actions which could harm this painfully constructed international image.

The obsession with representations of Portugal in the international press combines recent and traditional concerns. On the one hand, the government and its defenders stress the practical need to establish the country’s credentials in terms of stability and determination to repay its debt.  Instilling the necessary confidence among the financial markets and rating agencies, they argue, is a crucial step in order for Portugal to once again be able to fund itself. On the other hand, the notion that foreign data and analysis is more reliable than the home-grown kind, the quest for foreign approval, and the implicit vanity of being a topic of discussion in the rest of the world reflect a historically rooted inferiority complex that for decades has inspired the works of philosophers as well as satirists. Both trends fuel an exaggerated depiction of the international press coverage, with short op-ed pieces blown out of proportion (the abovementioned Krugman post is roughly 120 words long. If one were to rely solely on the indirect accounts of the Portuguese media – as most Portuguese do – one could almost be fooled into thinking that Portugal’s presence in the international press is nearly as ubiquitous as that of Greece or Spain.

There is certainly value in paying attention to the way in which foreign newspapers discuss one’s issues, but it is important to be aware of their limitations. The distant and dispassionate outlook of an outsider, not to mention the ability to contextualise a national case within a wider regional framework, can serve as relevant contributions to public debate by complementing or challenging narrower domestic narratives. Yet the overreliance on foreign depictions to inform policy or, even worse, the decision to regard the rehabilitation of one’s external image as the primary political goal can be dramatically counterproductive. After all, the detachment of an outside perspective by itself is not enough to produce an objective assessment: as this blog has repeatedly shown, each perspective – whether Portuguese, German, or Greek – can be shaped, distorted and conditioned by its own cultural context. For all its poignant insights into the causes, consequences and eventual solutions to the crisis in Portugal, the international press should not be expected to capture key meaningful nuances of the country’s history and society.

This is particularly the case with a prevalent discourse which ruthlessly condemns Portuguese public spending in recent decades, accuses the country of having ‘lived beyond its means’ and advocates a substantial impoverishment of its population. Such a discourse disregards the origins of the relatively young Portuguese democratic state, whose identity was built on the repudiation of over 40 years of brutal authoritarian rule rooted on poverty and ignorance, including abysmal levels of illiteracy and child mortality, and increasing international isolation.

The last four decades, for all the many undeniable strategic mistakes and shortcomings, saw the overall rise of living standards, the modernisation of the country’s infrastructure and a massive increase in people’s access to health, housing and education, as well as the replacement of a colonialist identity by an Europeanist ideal through integration in the Common Market and Eurozone. What the international press fails to appreciate, either when simplifying Portuguese past over-expenditure or when praising the current ‘good student’ attitude, is the psychological violence, not to mention the political damage, caused by a rhetoric that portrays these achievements as undeserved privileges and evokes a return to conditions of deprivation not yet forgotten by older generations. Uncritically adopting, then, the international media image of Portugal as a yardstick for domestic politics is not only politically unfruitful, but can also be socially destructive.

Dr Rui Lopes is currently a Teaching Fellow at the LSE and Managing Editor of the journal Cold War History.

4 Responses to The impact of the international press in Portugal