Fairness, Bail-in/outs and the Poor Germans

In response to the post “Selective truths and Spanish riches: The Bundesbank’s study on household wealth”

This article has been cross-posted from oditorium U.

The recent study of Bundesbank on household wealth has introduced the idea that German households are less well-off than some of their Southern Europe counterparts. The way the study has been used was accused in a recent post in this blog for attempting to “sway public opinion against further bailouts”. In this context, it seems suitable for the study to be considered with reference to the public discussion about the Cyprus bailout deal. The two issues need to be discussed together, as they are interrelated in terms of illustrating issues of “fairness” in European politics, as well as answering questions about who can and should bear the burden of wrong past decisions. 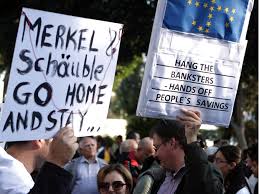 This is a discussion that we need to have, ideally supported by the best data that money can buy. Just assuming that Germany will pay the bill – and painting Ms Merkel’s face with a Hitler moustache if it does not – is clearly no longer going to work. If anyone thinks that Germany’s government is currently bullying the South, I would invite them to consider what will happen if ever Bernd Lucke’s party will become politically relevant.

I do fully agree that the Cyprus bail-in/out has been botched. It went to a fall-back position that was worse than the original proposal for pretty much everyone involved – and on top of it, it set a number of very dangerous precedents. I, however, do not agree that the original Eurogroup proposal – a 15% haircut tax on all uninsured deposits – or the counterproposal of the Cypriot president – a 7% haircut on everyone, and an additional 3% on uninsured amounts – was all that bad. In order to understand this reasoning I need to take a step back first and establish some bases:

After this long detour I want to come back to the original question – Was the Eurogroup right to ask for the 15% contribution of the large depositors? There, my answer is an almost unequivocal yes: those deposits were not insured, they had been reaping a risk premium, and – seeing what has happened know with the capital controls – one can argue that everyone would have been better off than in the alternative, even those who did not have their deposits in Laiki and the Bank of Cyprus. Arguably this would have killed the Cypriot deposit taking business, but – as I have argued above – this part of the Cypriot financial system (as opposed to the offshore incorporation part) was only viable because of external support and therefore did not deserve to survive. Would Laiki or the BoC have survived? With the benefit of the counterfactual argument I would say yes, simply because the Eurogroup would have felt morally obliged to do what it takes.

Was the Eurogroup right to accept the Cypriot 7%/10% counter proposal? Again, I’d say yes. Cyprus is a democracy after all, and if the Cypriot president decides that he wants to tax one part of its constituency for the benefit of another part of its constituency, who is the Eurogroup to say differently? Also, a 7% tax on deposits is annoying, but it is still a small number, and it also needs to be compared against the interest received. Savers in core Europe have lost more than 7% of their capital over the last few years due to the persistently low interest rates. The only criticism here is that the Eurogroup did not make it clearer where the decision to include ordinary savers came from.

Was the Cypriot parliament right to refuse the 7%/10% proposal? It was their choice; but this seems to be the most unfortunate decision in this entire sad story, and not only in hindsight: the Eurogroup had made a very reasonable proposal that protected the majority of the Cypriot savers, the Cypriot president insisted that all savers must suffer in the process, and the entire parliament – including the entire fraction supporting the president – rejected the proposal because ordinary savers are targeted. Speak of disconnect!

Finally, was the Cypriot population right to protest against the German government, comparing Angela Merkel to Hitler? Absolutely not. Especially given that the man whose decision it was to target the ordinary population – the democratically elected Cypriot president – did not get any of the blame.

This is where the comparison of household wealth, as discussed with regard to the Bundesbank study, comes in: if we want European states to share the burden of past bad decisions, then we do need to have the discussion on which shoulders this burden should be placed, and in order to do that, we do need to understand who is able to carry this burden. The question whether Cyprus is a dirt poor country that would be pushed into the abyss even by a 7% tax, or whether Cypriots are actually equally well off as Germans is a very important question in this context.

The Bundesbank study is an important step in this direction. It has its flaws, but as I have said in my comments on the relevant post in this blog, I challenge everyone who criticises this study to come up with better numbers. My estimate is that whilst Germany might not be the poorest country in Europe, in first order approximation its wealth is roughly in line with the likes of France, Italy, and Spain. If this is the case, then this does have implications in terms of how the burden of Eurozone bail-in/outs should be shared. If we do not have this discussion openly, dissent in Germany will grow, and in a democracy this will mean that the parties who have absolutely no interest in playing ball with the Eurozone probably gain more and more power, to everybody’s detriment.

4 Responses to Fairness, Bail-in/outs and the Poor Germans