At the height of the Cyprus bailout crisis, the German Central Bank, the Bundesbank, has introduced into the public discourse the notion that Southern Europeans are richer than Germans. This claim is based on a study on household wealth and a rather questionable comparison across countries. While the Bundesbank has noted the limitations of this comparison in the fine print, it is hard to believe that this is not a Bundesbank attempt to sway public opinion against further bailouts. In the current context this manoeuvre is rather reckless as it fuels some already significant and growing discords. The Bundesbank’s deception provides a good example of sound studies being misappropriated for advancing the political agenda of different actors in the current crisis.

From fact to fiction

On 21 March, the Bundesbank presented the findings of its panel study on Household Finances (“Private Haushalte und ihre Finanzen”). The Bundesbank’s study, part of an Euro-Area effort to collect data on Household Finances and Consumption highlights the gross inequality in the distribution of wealth in Germany. In the presentation and the accompanying press release, the Bundesbank claims that the median income of households in Germany is lower than that of households in Spain or Italy. However, both the comparison of wealth of German households with that of other European countries and the timing of the presentation, make the Bundesbank seem rather disingenuous. 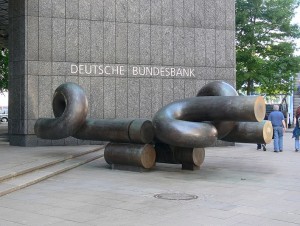 As the original presentation suggests and most media have acknowledged, the study is not suitable to establish meaningful cross-national comparisons. In particular, the Spanish Survey of Household Finances, which the Bundesbank refers to, is based on data from 2008 which does not reflect the effects of the current crisis such as growing unemployment, lower levels of disposable income, and most importantly, depreciation of real estate. According to the Spanish survey, 89.2% of the total wealth of Spanish households is linked to real-estate. Standard and Poor’s estimate that since March 2008, Spanish house prices have declined by 26% and are expected to drop a further 20%, so the current wealth of Spanish households is considerably lower than that captured in the report used for the comparison.

There are a series of erroneous assumptions in this public discourse triggered by the Bundesbank. First, Southern European households are not bailed out. Insolvent banks are bailed out or as far as governments have assumed banks debts, states have been bailed out. More importantly, the comparison of households’ wealth is highly misleading in the context of a discourse on solidarity and redistribution. For instance, the larger public sector and better pensions and services that German citizens enjoy are not taken into consideration. The structure of households varies across countries. According to Eurostat, German households have 2.0 members on average while French have 2.2, Italians 2.4 and Spanish 2.7. Moreover, as the Bundesbank shows, home ownership in Germany (44.2%) is much lower than in France (57.9%), Italy (68.4%) and Spain (82.7%). Because of these structural and cultural differences a comparison of household wealth amounts to a comparison of apples and oranges.

Notwithstanding the inherent incomparability of the data – and in stark contrast to the study’s methodological rigour – the Bundesbank chose to frame its findings in such a way that casual observers would only reach one conclusion: that German tax payers, being poorer than Southern Europeans, should not have to bail out the crisis countries.

Reactions in the press

Surprisingly though, most German media did not fully embrace the Bundesbank’s discourse. The press has largely qualified the results of the study and questioned the comparability of the data. Even Bild, a tabloid usually quick to exploit every opportunity for populist exaggeration, questions the result. Spiegel Online goes so far to criticise the Bundesbank for its rather inept attempt at generating outrage.
Most media present some background on why German households appear to be poorer, pointing to the fact that Germans tend to prefer to rent, rather than own residential property.

Unfortunately, this has not kept them from running with catchy, if grossly misrepresenting headlines that resulted in the furtherance of anti-bailout message. The headlines used by newspapers such as the Frankfurter Rundschau, Die Welt and faz.net misleadingly claim “Spaniards richer than Germans” or similar versions of this message.

The notion of greater Spanish, French and Italian wealth has found its way into the debate as if it were a self-evident truth. Der Spiegel (25 March, page 32) commented on the deposit tax in Cyprus: “No one in the crisis countries has so far been expected to take a cut in wealth [to solve the crisis]. But why not? According to a recent study by the Bundesbank, Spaniards are richer than Germans.” And for Passauer Neue Presse , the study has “done away with the fairy tale that Germany is the rich uncle” who should be liable for his poor relatives. Other commentators and politicians, too, have been quick to call, however naively, for a responsibility of domestic savers in bail-outs. Unsurprisingly, the readers’ comments are considerably more vitriolic, and it appears as if the Bundesbank has managed to reach the intended audience.

The foreign press has also echoed this issue. Most articles emphasise the limited comparability of the study reproducing the caveats already suggested by the Bundesbank and German press. In Spain,  El Mundo points out that the provision of public services and social insurance is not part of the Bundesbank’s assessment of wealth, which makes any meaningful  comparison impossible. El Mundo refers to a study that shows that a Spanish family would need 15 children and earn less than 35,630 Euros per year to enjoy the same level of benefits as a German family of four.

El Economista accuses the Bundesbank’s president, Jens Weidman, of misusing the study to consolidate the Bundesbank’s position that Southern countries should bear the costs of the crisis. In France, the financial newspaper Les Echos criticises the comparison and says that this is a move to put pressure on the ECB and reminds its readers that the study does not count the substantial pension claims of Germans towards household wealth.

Making these comparisons across countries is either a schoolboy error that should not happen at the Bundesbank or just a borderline unethical strategy to foster an “anti-bailout” discourse in Germany. As an academic, the lead researcher of the study, Ulf von Kalckreuth should be aware that selective contextualisation of evidence to advance political goals is not an example of good academic practice.

The Bundesbank has set into motion a discourse which risks fuelling animosities that are already present in the European public sphere. Understanding the current crisis is no doubt complex, given the differences in European economies, divergent national interests and the increasingly divisive public discourses on the crisis. Institutions such as the Bundesbank and the press have a responsibility to provide accurate, fair and nuanced information that can help better understand the crisis and identify potential solutions rather than continue the blame game. The Bundesbank did no one a favour by peddling its reductivist and deliberate misinterpretation of the available facts.

The press has shown surprising restraint and largely provided a lukewarm response to the Bundesbank anti-bailout lure. However, it has still contributed to the dissemination of misleading information and thus became the Bundesbank’s mouthpiece providing  a platform for a potentially very divisive discourse. Institutions such as the Bundesbank and the press should act more responsibly. In this case the problem was not only the utterly inadequate timing but also the falsehood of the message.

Stefan Bauchowitz is a researcher at the Department of International Development at the LSE.

29 Responses to Selective truths and Spanish riches: The Bundesbank’s study on household wealth