The shutdown of the Greek national broadcaster: between external pressure and domestic reactions 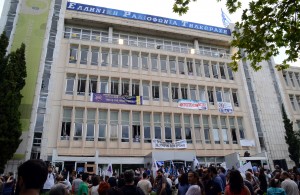 The Greek government’s sudden decision to shut down the public broadcaster ERT has shocked both Greek media and public opinion. It was announced that more than 2,600 employees will be fired, compensated and be able to re-apply for employment when it will re-open with fewer employees possibly as an independent public broadcaster in the next couple of months. On the government’s announcement last Tuesday evening, ERT employees took the street to protest against the decision outside ERT’s headquarters. The journalists’ trade union, known as ESIEA, decided a media blackout over Greek public broadcaster’s shutdown until Monday. Moreover, the two major trade unions, GSEE and ADEDY, went to a 24-hour general strike on Thursday and called on workers from all sectors to show solidarity for the sacked ERT employees, describing the government’s decision as unprecedented, authoritarian and provocative. Greek media were taken by surprise from the outset given that Greek politics are not used to such radical gestures. “Shock and Awe” was a characteristic title of news.gr, a main online portal. The initial reaction of the majority of Greek media was to condemn the government’s decision, although as the initial shock was gradually digested two main attitudes seemed to prevail. On the one hand, some journalists and publicists approached this decision as provocative, authoritarian and non-democratic, while others held the opinion that PM Samaras showed determination in promoting the structural reforms agenda. However, nobody argues that the public broadcaster should remain closed. Actually, the majority of politicians and journalists agree that ERT needs to be restructured, but not through the medium followed by the government.

In the meantime, the management of the whole issue by the government has sparked a splitting and polarised debate among journalists and politicians alike. For instance, the online portal left.gr compares Greek government’s decision to dictatorship and calls for a “Greek Taksim Square movement”. In the same vein, the online version of Eleutherotypia, enet.gr, reported on Thursday that “ERT survived the Nazis and the junta but not the troika”. On the other hand, capital.gr, portrays public broadcasting in Greece as an agent of corruption and cronyism in articles such as “That’s why ERT should never be reopened” while endorsing Greek PM Samaras for his political will to shut down an ill-designed, biased and corrupted broadcaster.

Turning to political implications, many fear that this highly risky decision could operate as a catalyst for the collapse of Greece’s fragile coalition government leading to new elections. “Either a solution in a week or elections” was the front page title of conservative newspaper Kathimerini. The coalition partners, Socialist PASOK and Democratic Left (DIMAR), demand ERT be switched back on immediately but they‘d prefer to avoid elections. “The country does not need elections, it would be a colossal mistake, but PASOK is not afraid of them”, PASOK leader E. Venizelos stated. “We support a radical restructuring of ERT, but not with blacked-out screens”, he said. On the other, Samaras appeared unwilling to back down. He described the country as a “real Jurassic Park” for the state of anomie and lack of regulation that characterises the public sector and appeared “determined to transform Greece into a modern economy”. Initially, he made it clear to his partners that “if they do not support the decision, we go to elections”, but later he tried to defuse the political crisis by calling for consultations next Monday. Both PM Samaras and Finance Minister Stournaras said they wanted “to restructure, not close ERT”. By all probability, Monday’s negotiations between the partners are going to be a ‘take or break’ moment for the future of the coalition government.

The number one question that is one everybody’s lips is what the main reasons were behind this risky decision. As it seems, there are three main factors that can explain Samaras’ surprise move:

First, there is external pressure to Greece from its creditors, known as Troika, to fire civil servants. According to the latest rescue programme, Greece has to fire 2,000 civil servants by the end of the year and 15,000 by the end of 2014. It seems that Samaras decided to start with the public broadcaster because dismantling what has been described by the majority of Greeks as one of the most corrupted public corporations and a vehicle of patronage jobs for political parties, would cause a creative shock and paralyse any opposition. However, events are not treating him kindly at the moment although it is too soon to tell.

Second, conservative Greek party (ND) wishes to appear as carrying forward a new reformist agenda based on determination for much-needed changes, law and order. Drawing upon Thatcherism, Samaras has selected to follow the path of direct public confrontation with Unions.

Third, Samaras believes that his decision to show determination will allow him to gain political capital in building up an advocacy coalition in favor of the reform agenda. According to this argument, without a clear-cut cleavage from the ‘anti-reform block’ he could not secure a strong public support for his reform policies.

Whether Samaras’ strategy will pay off or not, it is difficult to predict developments apart from that nobody seems to want elections. According to opinion polls PASOK and Democratic Left would struggle to keep their seats in Parliament if elections were held now. New Democracy has slightly widened its lead over leftist party Syriza, but it would be difficult, if not impossible, to secure the majority needed to form an one-party government. Even Syriza, despite impressions to the contrary, does not want elections. Alexis Tsipras is roaring for them, but in reality he would like to avoid them as Syriza is at the moment going through transformation from a loose coalition into a unified political party and is about to hold a conference on that. According to the latest news, Samaras is open to discuss with his partners (PASOK and DIMAR) and to make some concessions. However, until this moment he has shown no signs of backing down from closing the public broadcaster and re-launching it as a smaller, independent and more efficient agency. Many would judge him on his ability to do the latter by his determination to go through with the former.

1 Response to The shutdown of the Greek national broadcaster: between external pressure and domestic reactions