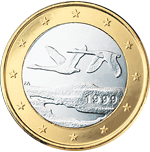 Eurocrisis. It is, after all, a small country of just over 5 million inhabitants on the (geographical) fringe of the European union. But the country has two assets that propelled it to center stage in recent years: a triple-A status and a low debt-to-GDP ratio. Finland also had its own ‘our man in Brussels’, i.e. Commissioner Olli Rehn. Together with Germany, Austria and the Netherlands Finland has been instrumental in shaping the response to the Eurocrisis that began with troubles in Greece in 2008. One particular aspect of Finland’s ‘toughness’, the collateral demanded from Greece and Spain, including the domestic political discussions about this exceptional demand, is left out here, because it requires special attention.

Right from the start of the crisis the ‘sovereign debt crisis’ has beeen couched in moral terms in Finland. In the editorials of the daily newspapers it has been common to see phrases like ‘countries that lived carelessly on borrowed money’, ‘moral decay’, ‘countries that handled their accounts badly’ etcetera – up to these weeks in June 2013. Although there have been many examples of op-eds that countered this interpretation of the Eurocrisis, the core message of both government and editorials has been more often than not, that the Euroscrisis was caused by over-indebtedness and that countries like Greece and Portugal simply have been living beyond their means, i.e. on borrowed money – without discussion who actually sold these loans to Greece and Portugal. Also in seminars on the state of the economy there is always a participant that tells we are turning into Greece if we don’t cut budgets.

However attractive and simple-sounding in a Lutheran country, this interpretation is not correct. As many economists and commentators have argued (seemingly in vain), the true cause of the Eurocrisis lies in the design of EMU and the resulting development of a huge trade surplus in Germany, capital flows to the ‘periphery’ and resulting (real estate) bubbles and increased (wage) inflation that harmed competitiveness. Nonetheless, Finland – both through Olli Rehn and its government, strongly endorsed the austerity policy for the PIIGS. The argument has been simple: if countries have lived beyond their means, it means they must tighten their belts. This became official policy in 2011 after an important G20-meeting. In the words of Olli Rehn (to the Finnish daily Helsingin Sanomat): ‘Those that still have leeway can finance stimulus until the end of the year [2010], but they also have to start stabilizing public finances during 2011.’ – to which the author of the article added that this is done using borrowed money. The meeting was also noteworthy because Germany demanded belt-tightening while the USA warned to keep stimulus going.

With the advent of the current Finnish government, in which former Finance Minister Jyrki Katainen became Prime Minister, the so-called ‘debt-sustainability discussion’ became again a central policy problem and the government indicated its readiness to cut budgets if need arises. In 2011 editorials again repeated the need to tie indebtedness to GDP, as a strict limit. These editorials still criticised Southern European countries for not keeping a check on public debt, unlike Finland, which in these editorials is seen as a paragon of prudence. It is noteworthy that in these editorials the construction of EMU, the role of German, Dutch and French banks and the incompleteness of monetary union are seldom, if at all, mentioned (although individual journalists may refer to these). To the contrary, both government and press have time and time again emphasized the importance of not mutualising debt. To this day, there is still fierce opposition to the idea of ‘paying the debts of profligate nations.’ In this context, recently there is a lot of mention in editorials of the ‘moral decay’ that would happen if debt is shared somehow, that countries wouldn’t feel committed to be strict with public debt issues.

Interesting is that at least the Finnish daily Helsingin Sanomat quite frequently has extensive articles on Greece or Spain (at least since 2012) regarding the effects of the Eurocrisis, but it almost seems the main editors of the newspaper are not aware of the connection between these developments and the austerity policies driven by Finland, Germany, the Netherlands and the European Commission.

The stance of the Finnish government and the editorials of the main newspapers is all the more remarkable, given that two major scientific pillars of the austerity policy – articles by Alesina & Ardagna and Reinhart & Rogoff- have been thoroughly debunked. Furthermore, Finland’s economy has significantly weakened. In fact, Finland experiences its third recession since 2008. Right now, the labour market partners are gearing up for Autumn’s collective bargaining rounds. Government representatives, banks, corporations and the European Commission are pressing for wage moderation. The prime reason for this is the worry about Finnish competitiveness, because a while ago Finland’s trade surplus turned negative – although this trend already started early in the 2000s.

But also on the ‘academic’ level there is open discussion over what to do. The variety of suggested responses to get the Finnish economy back on track ranges from leaving the EMU to engineering ‘zero- or negative wage growth.’ Some of these economists are on the other hand worried that wage moderation will negatively affect purchasing power and domestic demand. It does nonetheless appear that at this level of public debate, there is an understanding of the limits of government budget cuts, and that this limit has been reached.

All in all, Finland is still very tough on the issue of public debt, both in government policies and newspaper editorials. On Finnish blogs, however, there is a lively discussion of the dangers of current policy.

Paul Jonker-Hoffrén is a post-doctoral researcher in Sociology at the University of Turku (Finland) with main interests of industrial relations, competition policy and economic policy in the EU. He writes Arjenpolku blog.

This entry was posted in Finland and tagged austerity, Blame, Triple A economies. Bookmark the permalink.

8 Responses to Finland: a tough Nordic accountant that is caught up by reality