Posted on September 25, 2014 by Eurocrisis in the Press

Finland is slowly but steadily sinking into increased economic hardship. The lack of growth combined with increased unemployment is fought off by increased public spending and debt, with the implicit assumption that growth is just around the corner. It is hard to avoid the mental picture, where we stand on the deck of Titanic listening to a string quartet – instead of looking for a life boat.

The crisis that our nation faces is often quite correctly described as a structural crisis. It is however important to understand, that “structural” does not necessary translate into “unavoidable” in this context. Depicting the crisis at hand as structural, includes an implied assumption that we produce the wrong products, but at the right price. However, anyone who has studies basic economic theory – or attended Black Friday for that matter – knows that prices have an effect on demand.

Before we joined the euro z 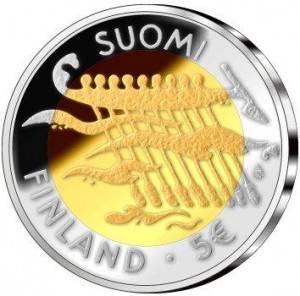 one, prices in Finnish markkas (FIM) could evolve differently from for instance prices in Deutschmarks (DM). When prices in FIM increased faster than prices in DM – as often would have been the case – the FIM/DM exchange rate reacted to counterbalance the relative price increase in FIM. Hence, the competitiveness equilibrium was maintained by demand and supply in the currency markets. A freely floating currency regulates the competitiveness of an economy in a much similar way to the centrifugal governor in the Boulton & Watt steam engine of 1788.

The GFC in 2008 abruptly ended the practice of smoothing over a lack of competitiveness with increased debt. Suddenly some of the euro economies were still running well, but most were choking. As the common currency prevented external devaluation of national prices, the only way forward was internal devaluation. Enter deflation.

An external devaluation is surely not painless either – as many of us would remember from Finland in the early 90’s. It is however symmetric, as it cuts into each citizen’s buying power fairly equivalently, and could hence be denoted “competitiveness through solidarity”. Needless to say, there would be no need at all for a devaluation in Finland, if would not have not joined the euro zone.

However, accepting the facts is the beginning of all reason, as our late president Paasikivi used to say. A sustainable and responsible way of improving competitiveness is to increase productivity. Productivity in its turn can be stimulated by increasing incentives to work and venture, improving competition and decreasing bureaucracy. Let’s start looking for the life boat!

This entry was posted in Finland and tagged devaluation, Structural reform, unemployment. Bookmark the permalink.