The Symbolic Crisis of the Euro: Trust and Distrust in Currency as an Identifying Medium

The European unification project has in a way always been in crisis. It was born out of experiences of disastrous divisions and wars, and a sense of balancing on the brink of an abyss has accompanied European self-understanding. The efforts to bridge gaps and forge co-operation between European nations have always been precarious.

On 9 May 1950, the so-called ‘Schuman declaration’ proposed the formation of the Coal and Steel Community, which later led to the European Union. Building collaborative economic and political institutions soon had to be matched with symbolic tools for shared transnational identification, lending a cultural dimension to the European project.

One cultural tool for constructing Europe has been through official symbols aiming to emotionally strengthen citizens’ identification with basic values of the European project.

Five main European symbols have been singled out. The Europe Day is 9 May, commemorating the Schuman Declaration. The European Anthem, based on the melody ‘Ode to Joy’ from Beethoven’s Ninth Symphony, likewise expresses a dream of universal joy and fraternity. The European Flag with its symmetrical circle of twelve stars was meant to represent perfect harmony and convey a Promethean view of Europe’s states striving to reach the heavens. The European Motto is ‘united in diversity’, emphasising respect for diversity, magically transforming the inner division between languages, cultures and nations from an obstacle to integration into a valuable resource.

The fifth symbol is the euro, introduced in 2002. When trust in European institutions is shaking, so is the belief in those symbols and the identification of and with Europe as a collective community. Such crises make necessary a challenging and negotiated redefinition of those identifying symbols, attributing new connotations to what it means to be European. The current financial crisis has most intensely struck Greece, regarded by many as the cradle of European civilisation – not least by the European Union, who chose for its currency the name (Euro, introduced already in 1995) and the symbol (€). The latter is based on the Greek epsilon letter, with two horizontal lines added to symbolise the currency’s stability, again testifying to the centrality of confidence for money value. It was consciously designed to remind its users of Europe’s Greek roots, in an attempt to strengthen the credibility of the Union by means of historical continuity. If Greece would leave the Eurozone, this will not only create monetary difficulties but also question the signifying force of the € symbol.

The banknote designs include the star circle to symbolise the ‘dynamics and har­mony among the European nations’, and a map of Europe. The main motifs comprise buildings of key eras in European cultural history, from classical antiquity to the twentieth century, adding to form a ‘money-story’ of progressive continuity. No individuals or identifiable buildings are depicted, in order to avoid unfair representation. This abstractness has been criticised as symptomatic of the too vague nature of the EU project, having a void core in its middle, like the empty circle of the European flag. On the other hand, this abstractness can also open up to be filled with input from different groups of people, in line with the ‘united in diversity’ motto. Whether the core of Europe is empty or open is thus an open question.

Depicting works of architecture ties in with architectural metaphors of ‘building’ a European Union through well-planned construction, gradual reforms and constant revision, paying ‘tribute to the capacity of human labour to create great works and to improve them over time’, rather than to organic growth or revolutionary leaps. The designs aim to create confidence in the stability of the Euro and the EU, standing for the ‘desire to construct a solid and lasting whole of stone and iron, which is not dependent on economic and political contingencies but which mirrors the eternity linked to the motifs of classical culture’. 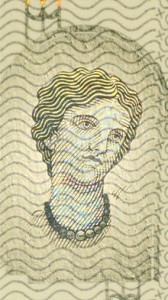 The portrait of Europa on Euro banknotes

The architectural motifs are windows, doors and bridges, intended to express  ‘the European spirit of openness and cooperation’ among member states and the ‘close co-operation and communication between Europe and the rest of the world’. The effect would have been completely different had it been residential or government buildings, as in federations like Russia, China and the US. Windows, doors and bridges for people to cross are typical of a land-based civilisation, where the combination of stabile buildings and the mobility they are built to facilitate underlines a determination to secure geographical mobility and communication with others. This intercultural interaction is different from in older river-based high cultures: Europe has long been more dynamic, historically unstable and continuously traversed by people on the move. The desire to move, link and mediate is a key feature of European symbolisms, from the myth of Europa and the bull to the motto ‘united in diversity’.

Those who trust the bridges’ stability dare to be mobile. Windows, doors and bridges are classic symbols for the dialectics between similarity and difference, closure and openness, boundary and transgression, for instance in Georg Simmel, Gaston Bachelard or Swedish Nobel prize-winning poet Tomas Tranströmer. European history is full of communicative endeavours: the Viking voyages, the Crusades, voyages of exploration and colonial enterprises all had highly destructive dimensions but also included elements of a desire to communicate with others who are different, as Tzvetan Todorov shown in his study of The Conquest of America (1982) and Étienne Balibar (We, the People of Europe?, 2001) when defining Europe as ‘the interpreter of the world, translating languages and cultures in all directions’.

While the euro banknotes display resources for communication, they provide less support for any notion of concrete difference in content. Their abstractness evokes universal uniformity, in line with the flag’s indistinguishable stars. The obverses of the coins do little to change this. It is up to the users of the symbols to imagine how communication can take tangible form – or, through real actions, to populate the anonymous communication resources with meaningful content.

The coin reverses show how this can be done.  Each country has there created its own motifs. Small depictions are thus circulated of the plurality that is unified by the EU, moving in and out through its symbolic doors and windows. The two sides of the coins are designed to express the spirit of the EU motto: the fronts represent the unity of the European Commission whilst the national reverses stand for the diversity of the European Parliament. By specifying the denomination, it is the fronts that guarantee the economic exchange-value of the coin, while the reverses manifest the diversified symbolic use-values of cultural identity.

Currency requires trust, and is intended to create loyalty towards a collective community. The currency crisis proves how fragile the monetary system is. Yet money not only plays a role on the global markets but also in our everyday life. In the interface between personal lifeworlds and institutional systems of markets and states, money is a symbolic glue connecting individuals to collectives and interpreting Europe.

United and uniting through diversity, the euro balances between federalism and fragmentation: striving to avoid both the homogenised isolation within a “Fortress Europe” and the tattering of the community into mutually incompatible nation-states. The coins create trust by subtly connecting the European obverses with the national markers of identity on the reverses, thereby redefining them as European.

The issue remains open: Europe must demonstrate its trustworthiness by balancing the need to comprise an identifiable entity with respect for particular interests. This circle need not be vicious, but, like the hermeneutical circle, it can stretch out into an open spiral where various dialectics are at stake: between the local, regional, national and transnational; between the cultural expressions of the symbols and everyday practices; between the individual and the collective; between the concrete and the abstract; and between the economic, political, social and cultural dimensions. It is in this fascinating borderland that crisis but also trust are expressed and created. In times of deep crisis, the everyday mechanisms that secretly bind us together tend to surface. How this dialectical process will continue remains an open question. Existing symbols of Europe have far from put an end to this precarious dialectics.

Johan Fornäs is Professor of Media and Communication Studies at Södertörn University in Stockholm, Sweden

This entry was posted in Euro, Europe and tagged EU currency, Euro, euro banknotes, Europa, Europe day, European civilisation, European identity, Greece, images of Europe. Bookmark the permalink.
We use cookies on this site to understand how you use our content, and to give you the best browsing experience. To accept cookies, click continue. To find out more about cookies and change your preferences, visit our Cookie Policy.