Older, anxious and white: why UKIP are the English Tea Party 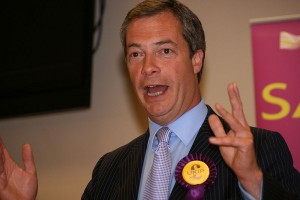 In 2010, when the UK Independence Party, under the increasingly high-profile stewardship of Nigel Farage, began to make some headway in the polls, commentators wondered whether they might turn out to be the British equivalent of the US Tea Party.  After the recent local elections in 2013, when UKIP won an unprecedented 25% of the vote, this point was made again, with particular links drawn between the two parties’ right-wing, populist, anti-government stance.

These types of comparisons are popular, as they can be used to frame novel events or issues, but have also been criticised for being too simplistic. In this case, it’s important to acknowledge both the key differences between the UK and US political systems, as well as the extent to which the Tea Party’s Christian conservatism, and powerful corporate backers, mark it out as a very particular political animal. Likewise, in trying to draw comparisons, it’s important to ensure that the most precise labels are used. Given that UKIP has a negligible presence in Scotland and Wales, and attracts almost all its support from English voters, the case to be made is that it is England, not Britain’s, version of the Tea Party.

Notwithstanding these important caveats, recent research on both sides of the Atlantic points to some interesting similarities between the two parties, both, in terms of their supporters’ attitudes and experiences and the impact they may be having on the wider political system, as a whole. Of particular interest, here, are anxieties around generational change and the extent to which debates about entitlement are often tied to questions of (national) belonging.

In trying to compare the parties, the first feature of note is the type of supporters they attract; the vast majority are middle-aged or older and white, while men are more likely to be supporters than women. In the case of the Tea Party, ‘nationwide surveys produce a consistent picture of Tea Party supporters… Between 55 and 60 percent of supporters are men; 80–90 percent are white; and 70–75 percent are over 45 years old’ (Williamson, Skocpol & Coggin, 2011: 27). According to YouGov data, 85% of UKIP supporters are over 40 years old and 57% are men. Surprisingly, there is no official data on ethnicity, but it’s generally agreed that most of their supporters are white.

Where supporters of the respective parties differ most is in terms of class. A report, based on research funded by the Toy peer, Lord Ashcroft, notes that, ‘UKIP voters are …more likely to be male and older, but more likely than average to be in social groups C2 and DE (and less in ABC1)’. Tea Party supporters, on the other hands, tend to be ‘better off economically and better educated than most Americans’ (Skocpol and Williamson, 2012: 23). What this actually means in practice is that while Tea Party supporters tend to be former Republican voters, UKIP draws it support from a wider ranger of voters, although, unsurprisingly, ex-Tories still dominate. As we will see, this feature may actually have a more profound impact on the British political landscape, given that both Labour and the Conservatives are required to address the rise of UKIP.

Elsewhere, a key feature of both parties rise to prominence has been the role of particular media sources that are not only seen to define key issues, and potential solutions, but also to foster a ‘social protest identity’ among disparate groups. For instance, political correctness, the idea that ‘silent majority’ are unable to say what they think for fear of offending minorities, has been one way that populist groups have managed to justify their activities and portray themselves as ‘outcasts’ and subject to the tyranny of ‘liberal’ elites. In the US, it has been radio shock jocks and Fox News that have filled this role, while in the UK, it is two newspapers, The Sun and Daily Mail, that offer their readers (including 70% of UKIP supporters) a steady diet of anti-immigration and EU rhetoric.

In terms of policy-making, much has been made of both parties combination of social conservatism and economic liberalism and the extent to which their policies primarily focus on cutting back state spending (with the exception of defence) and reducing the role of government, notably when it comes to environmental and equal opportunities legislation. Of course, there are differences both between, and within, the parties when it comes to the radicalism of their proposals, notably when it comes to welfare. Notable here is the degree to which supporters of both parties choose quite carefully the types of social spending they want to be cut. In the case of UKIP, the NHS, which still has broad-based and popular support among the British electorate, is often excluded from cost-cutting pledges. Likewise, in the US, Tea Party supporters make a distinction between welfare that benefits people like them (for instance, Medicaid and Social Security) and programmes that are seen to support less desirable groups.

But what is really striking about supporters of both UKIP and the Tea Party is the fact that when they get to talk in depth about what concerns and motivates them, economic issues come a distant second to anxieties around generational change and, in particular, ethnic diversity. The following extract from Lord Ashcroft’s study sums up a number of the main concerns of the UKIP supporters and sympathisers his researchers interviewed;

“These voters think Britain is changing for the worse. They  are pessimistic, even fearful, and they want someone and something to blame… Voters are driven towards UKIP by a deeper unease with the way life has changed in modern Britain. These complaints were very often related to immigration, the changing character of their local area, advantages that immigrants seemed to be given over themselves, and excessive sensitivity to people from other cultures and religions”

This is a point also made by many of the people interviewed in Skocpol and Williamson’s study of the Tea Party, with the following being typical comments; ‘I want my country back’, ‘We need to take our country back’, ‘I feel like my country is being stolen by people who have come here illegally’ (2012: 10/72). Arguing that they no longer recognized the country they grew up in, their narratives were again marked by anxiety, confusion and fear and, generally, pointed to the impact of immigration and the increasing diversity of the American population.

What is notable about these statements is that they tell us something very important about the ways in which these groups see the world. First, they view themselves, and people like them, as being at the heart of the nation’s social and cultural life; they are the people who belong without question. Second, while they can be accepting of minority groups in general, when these groups are perceived to have the power to do what they want (secure housing and benefits, build mosques, open shops, have signs and leaflets printed in ‘their’ languages), then this elicits a really passionate, and generally quite fearful, response. Third, in this worldview entitlements to key social and economic resources are defined in relation to hierarchies of belonging. Put bluntly, the people who (are seen to) belong more are entitled to more. Therefore, even debates around economic issues (jobs, housing, welfare) are often informed by wider understandings of culture and belonging. Or as Skocpol and Williamson note; ‘deservingness is a cultural category, closely tied to certain racially and ethnically tinged assumptions about American [and British] society in the early twenty-first century’ (2012: 74)

Given the increasing diversity of younger cohorts on both sides of the Atlantic, what we have is a potential for generational conflict that is sometimes overlooked in the wider debates around pensions, housing bubbles and university fees. In other words, while Britain/England and the US are, by and large, becoming both more diverse and more tolerant, as a whole, there is a powerful cohort that is fired by generational fears about the way ‘their’ country is headed and, in particular, the threat that perceived ‘others’, often defined in terms of ethnicity, are seen to represent.

Three final points are worth making. First, there is obviously a danger in talking about generational conflict as if all people of a particular age share the same values and prejudices. In England it is not only older people that argue that immigration should be controlled, although they are more likely to hold stronger views on the topic. Likewise, the majority of people aged forty and over do not vote for UKIP or the Tea Party. However, the fact that these parties are increasing in popularity does matter. It also matters that they are predominantly supported by older people, not least because this group vote in far larger numbers and tend to be more politically active and better organized, than younger generations.

The impact of the Tea Party, in driving out moderates and pushing the Republican Party to the right, has been well researched in the US. In the aftermath of UKIP’s success in May’s local elections, both main political parties have begun to ramp up their talk about immigration and Europe. It is also interesting that in all of the debates around cost cutting, austerity and the deficit, very little has been said about pensions. While the power of the grey vote has become something of a cliché in recent times, baby boomers will continue to have a disproportionate impact on the political system for the foreseeable future. It also seems likely that the attitudes and experiences of a cohort within that generation, which has finally found a more credible voice for its concerns and anxieties, will force mainstream politicians to adopt a more populist agenda.

This article was first published at Open Democracy on 17 July 2013.

Dr. Michael Skey is a Lecturer in Media and Culture at the University of East Anglia. His monograph entitled ‘National Belonging and Everyday Life’ (published in 2011 by Palgrave) was joint winner of the 2012 BSA/Phillip Abrams Memorial Prize.