‘Europe has no divine right to prosperity’ – Interview with Nick Malkoutzis 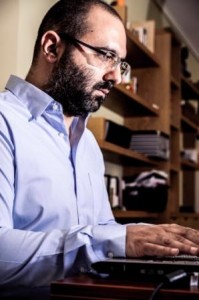 Euro Crisis in the Press has asked the views of influential analysts and commentators throughout Europe on the multifaceted crisis facing the European Union. In today’s interview, deputy editor of the English language edition of mainstream Greek daily ‘Kathimerini’, Nick Malkoutzis, talks to our Managing Editors, Vassilis Paipais and Roberto Orsi. Mr. Malkoutzis argues that the idea of convergence of the Eurozone economies did not work nor does strict austerity now and that, in the long run, fiscal transfers will be inevitable. He notes that journalists were forced to do a crash course in economics to keep up with the intricacies of the crisis and that despite some patchy reporting and use of populist stereotypes across national and international media, poor coverage was mixed with some excellent analysis. Finally, he admonishes against the dangers of growing Euroscepticism should the alienating tendencies of the crisis are not addressed.

Mr. Malkoutzis, there is little doubt that Europe is undergoing an unprecedented crisis. The crisis itself can be seen as having multiple dimensions: a financial crisis of the Eurozone and the Euro as a common currency, an institutional EU-wide crisis, a crisis of the European post-war social and economic model or even a European identity crisis. From your point of view, what is the most important aspect of the crisis?

To a great extent, this crisis is about hubris. It seems to me that Europe thought it had made it when the euro was launched, that the European project had entered its final phase or had even been completed. We perhaps felt that economically, politically, socially and even culturally we had reached a higher plane than the rest of the world. While there is much to admire about the European project, this feeling of accomplishment simply covered up the cracks in the architecture of the EU and euro as well as the chasms between its member states. The idea that we had attained convergence was wrong as was the idea that Europe had a divine right to prosperity.

This is why addressing the current crisis is about more than just rectifying economic weaknesses. Yes, a banking union, for instance, would help but there is much more to it than that. Unless we develop a much clearer and more coherent picture of what we are trying to achieve, apart from making the EU more competitive in the global economy, then we are certain to fail. Our differences need to complement each other, our cultural diversity should be a cause for celebration rather than division, our long and sometimes bloody history must serve as a guarantee for cooperation and understanding, while our respect for human rights and the social model born in Europe have to be held up as a beacon in these challenging times. Ultimately, we need to discover who we are and where we want to go and the answers don’t lie just in our economies.

Is the Eurozone architecture the sole cause of the crisis? What are the potential policy responses that you think would be most effective?

In terms of the euro, the idea of convergence was a sham. Rather than economies coming together to form a powerful, competitive block, they became unequal pieces against each other. To some extent this was caused by the lack of fiscal, economic and political union to back up a single currency.

But there were also serious failings on a national level.  The Germans understood what lay ahead much better than others and Gerhard Schroeder’s Agenda 2010 put the country’s economy on a favourable footing. Unfortunately, other Eurozone members, particularly in southern Europe, closed their eyes, hoped for the best and were left foundering in Germany’s wake. Too many Eurozone economies became unproductive, uncompetitive and unresponsive to the needs of the global market. The euro, meanwhile, lacked the tools to address these weaknesses.  Some of these deficiencies are being addressed.

As painful as the process is, public finances need to come under control. The role and effectiveness of our public sectors also need to be scrutinised. Furthermore, structural reforms to allow our economies to be nimbler and responsive cannot be avoided. The key element to all this, though, is balance. I fear that in the Eurozone, we have got the balance totally wrong. Destroying economies, and with that people’s trust and hope, through excessive levels of austerity is no way of rebuilding. Austerity needs to be balanced with reform and then both have to be weighed up against investment and growth strategies. The Eurozone has to rediscover production and must innovate more. One element to this is creating a vision for the future; the other is finding the capital to support it. The former requires a serious upgrade in the quality of our decision makers at a national and European level and I don’t see how the latter can happen without greater economic union in the Eurozone, the introduction of Eurobonds and, ultimately, fiscal transfers.

The crisis has dominated the press across Europe, what did you think about the coverage? Was it credible and informed, did it help people understand the crisis, or do you think press coverage succumbed to populism and simplistic analysis?

There has been some very poor coverage but there has also been some truly excellent reporting and analysis. The crisis has thrown up a wide range of stories, from the high-level economic and political decision making process to the human impact of the savage cuts implemented in Greece, Portugal and elsewhere. Some of the coverage has been populist and failed to dig beneath the surface of what sometimes are complex problems. There has also been a tendency for national stereotypes to be used by the media in a number of countries, which has been really disappointing.

However, the crisis has also produced some outstanding writing and analysis. Examples in the English-language media include the work done by Marcus Walker, Charles Forelle and Matina Stevis at the Wall Street Journal, Peter Spiegel and Joseph Cotterill at the Financial Times, Luke Baker at Reuters, Landon Thomas Jr. at the New York Times and Nikos Chrysoloras, my colleague, at Kathimerini.

The crisis has been an incredible challenge for journalists because of the technical and intricate nature of the subject matter. Many of us have had to do a crash course in economics in order to keep up, and sometimes the gaps in our knowledge are evident. So, it has been inspiring and educational to follow the excellent analysis provided by some of our colleagues. The crisis has also fuelled the development of Twitter as a platform for journalists to disseminate information and exchange views. This has also been a real bonus of the past few years.

Europe shares a currency but is socially, culturally and politically heterogeneous. Do you think national media have been too ethnocentric in their approach to the crisis? How would you assess the coverage of the crisis in Greece?

In terms of how the Greek media has covered the crisis, I would say it has been patchy at best. There has been too much misinformation and misunderstanding of the situation to say the media has played a constructive role in people’s appreciation of what is going on. Too often the coverage has passed through the prism of petty politics and backstage gossip that has been such a mainstay of journalism in Greece, rather than giving a more comprehensive and balanced view of the situation. Even worse has been the stereotyping of certain nationalities, particularly the Germans, by some section of the media.

As for how the international media has covered events in Greece, I would also say that its reporting has been mixed. Too often, foreign reporters have bought into the prevailing narrative of the time: At the start of the crisis, the story was very much about the lazy, cheating Greeks, then it focussed on the human angle of the suffering caused by the collapsing economy and intense austerity before moving on to the oligarchs accused of having a vice-like grip on the country. There is something in all of these angles but none gives anywhere near the whole picture and some foreign journalists have not done themselves any favours by chasing these stories simply because someone else reported on them a few days earlier. The recent example of a string of stories on the Greek “success story,” which within a month were replaced by reporting on political turmoil and missed targets, was a particular eye opener. That said, there has been some admirable reporting from Greece by journalists based here or those who have taken the time to understand the country and its people, sometimes with the help of excellent fixers.

Are there any further important dimensions of the crisis which you think have been missed or under-analysed?

I think one of the developments dawning on all of us is that Europe could be sowing the seeds of its self-destruction during this crisis. Euroscepticism and nationalism is growing, the far-right is emerging and differences between member states and their peoples are becoming more pronounced. After the events of the last few years, I have the impression that the man on the Helsinki or Hamburg omnibus, so to speak, has a completely different interpretation of what the EU and the euro means to him than his counterpart in Athens or Lisbon. Equally, we find ourselves in a situation, largely due to the way national politicians and media have framed the debate, where many citizens in the north and south have different but equally warped impressions of what has caused this crisis. As a result, there is a big disconnect between the citizens in the north and south – the difficulties we face, our hopes and fears. If we do not address this quickly and decisively then the whole edifice will fall apart and the debate about austerity, reforms, banking union and Eurobonds will become academic.

Thank you very much for your answers.

Nick Malkoutzis is the deputy editor of Kathimerini English Edition in Greece. He has written about Greece for BusinessWeek, The Guardian and Foreign Policy. Nick has also authored several policy papers and analyses about the Greek crisis for the Friedrich Ebert Foundation.